OWEN'S BASKETBALL TEAM WON THEIR FIRST GAME OF THE SEASON!!!!

And since it was also the last game of the season, it was doubly awesome. The coaches were so happy and the kids were over the moon. They all got trophies and Owen's was for "most improved" and that is certainly the truth, recalling if you will how he stood on the sidelines and cried for the first several games. He played today with all of his heart and now, he is truly ready to play basketball. Next season I think this boy will be something on the court. 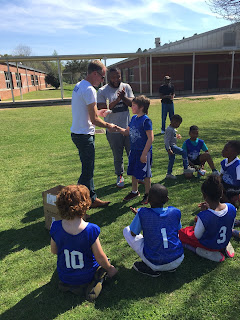 Did I cry? Of course. Just a little. It started when I was standing behind my husband during the game, holding Maggie and I looked at that man who spent so many hours of his young life on the basketball court and was now watching his grandson play with all of his attention. He is still so straight and tall, this man, and he was wearing jeans and a beautiful purple button-up shirt that I ironed for him last week, and I couldn't help it- the love I feel for him as a person, as a man, as the daddy of our children, as the grandfather of their children, as a lover, as a husband- it all overwhelmed me and tears sprang into my eyes.
And then, after the game when we all went on the court to hug our particular player, Owen said, "I am so glad you're here, Mer!" and oh, I was too. 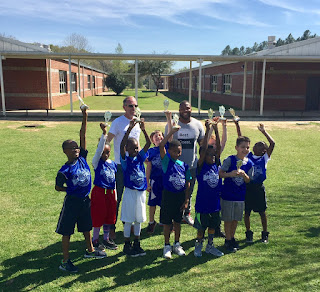 And then there were all of these sweet babies who played so hard and did so well. And all of the parents and grandparents who came out every week and cheered them on. It all made my heart swell and overflow a bit.

Owen started baseball practice yesterday and his mama reported that since last year he has outgrown his pants, his shirt, his shoes, his glove, and his bat. So. Boppy took him shopping after the game and then took him to an FSU basketball game. He actually invited himself to the game. He called his grandfather and this is the conversation that was reported to me:
"Boppy, do you have an extra ticket to the basketball game?"
"No, but I can buy one."
"Great!"
"You have any money?"
"My mom will give you some dough."

So everyone went their separate ways and I came home with a list a mile long to get accomplished but Tallahassee Liz called me and said she was in the area, could she come by? Of course! I've been thinking about that woman for days. I mean, intensely. And so of course she called and we had a little back porch catch up and it was wonderful and I still got a lot done after she left. I swept the front porches and sort of put the plants back where they belong, gave them all a good watering, 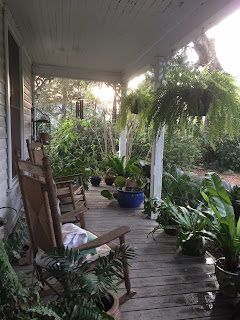 got the clothes off the line, folded them, put them away. And now it's time to cook the kale I picked for tomorrow's brunch frittata-like dish and make the biscuit dough.

I'm happy.
There. I said it.
Then I knocked wood three times.

The simple happiness of knowing that it's been a good day. Of a day when I got to make some good connections. Of a day where my grandson was so thrilled and proud and I was there to see him. Of a day when I knew to my bones that I am married to the love of my life.
And tomorrow I'll get to see ALL of my children and ALL of my grandchildren and we shall eat angel biscuits and it will be noisy and crazy and sweet and funny and then we might go out on the boat.

All will unfold as it will. As it always does.