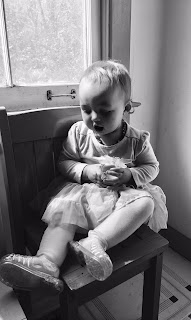 Woke up this morning anxious and still really pissed but at least I had a reason for that- the time change, of course.
Fuck that shit. I mean...
Well. Just fuck it.

But, I knew that the Lily and Jason family were coming out for pancakes and bacon and that was a cheering thought and since no one around here had any time frames, we just rolled with it and I made a bunch of pancakes and a lot of bacon and the kids got to meet the chicks. Owen approved of the Nicey I selected and Gibson chose the little black fluff with yellow on her head to be Dearie. 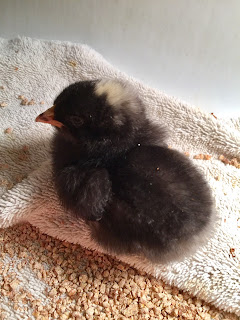 Maggie didn't know what to think about the babies. We let her hold one with a great deal of supervision but she was not exactly comfortable with the situation so that didn't last long.

So we feasted on the pancakes except for Owen who didn't feel very hungry and me because I think I'm sick of pancakes to tell you the truth. Unfortunately I am not sick of bacon but I didn't go hog wild.
Hahahahahahaha!
I'm sorry. That was ridiculous.
What I'm saying is, I didn't pig out.
Okay. Someone needs to come and slap me. Hard.

Here's my granddaughter. Isn't she beautiful? 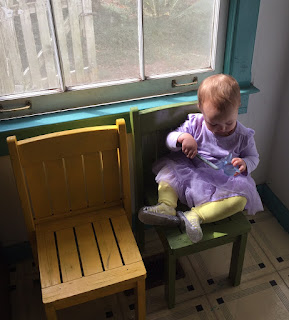 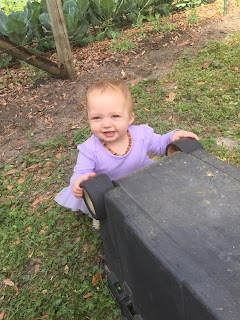 At one point Lily and I were in the kitchen and we thought Maggie was in the Glen Den with all the fellows and we could hear her fussing a little bit, but thinking there were a bunch of guys who could deal with her, we ignored it until suddenly we both went, "Where IS that girl?"
She was not in the Glen Den but had gotten stuck trying to climb up some chairs in the mud room. We saved her and she was fine.
I tell you what though- there sure are a lot of places for babies and cats to get into mischief in this house.

And I guess that's all the news although actually, wait a minute! Today is May and Michael's one year anniversary. Can you believe that? Remember?
Oh, what a great shindig day that was! 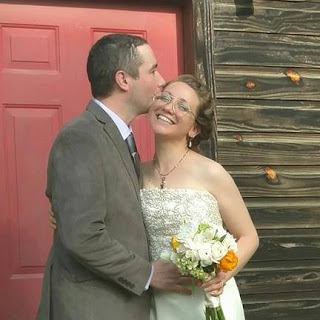 And they are still newlywed sweethearts and will be going on a second honeymoon to St. Augustine in ten days. This time they get to stay for a week.
Hurray!

And there you go. I haven't even started supper yet and it's almost (fake) eight o'clock.
Stone crab claws tonight. And salad from my second planting of lettuces in the garden.
Should be decent.

All right. Don't stay up too late. Tomorrow will come shockingly early, as you are quite aware, I am sure. Unless you are a chicken in which case you won't care one bit.