They Soothe My Soul 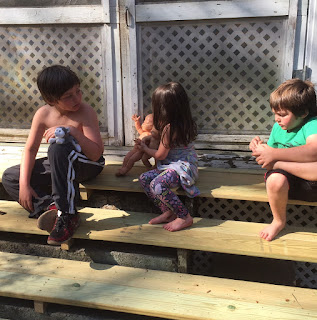 Finally got to see every one of my grandchildren today PLUS Darling Lenore who came over with her Aunt Lily and her cousins which was a treat. I know that's not much of a shot but that's when they first gathered on the back steps so I could get any picture at all and Magnolia was already in the car.
Here's the posed shot. 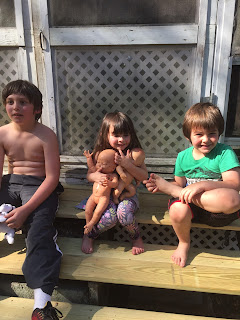 The light was all wrong and so on and so forth but at least no one had their finger in their nose.
I find it a bit scary how much Owen is looking like someone who is going to be a teenager in about a minute and a half.

So. Dang. I've already got this post all jackie dip because before those children came over, Jessie and August came to see me this morning. We hung out and fed chickens and ate grapes and stuff for awhile. 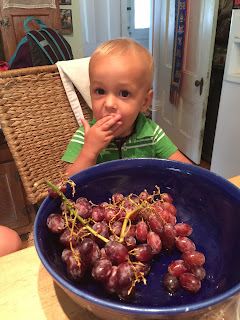 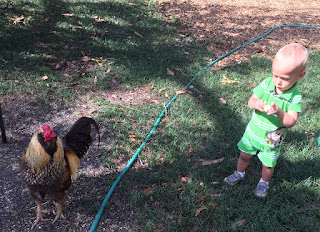 August kept running to the bathroom where the little chicks had been to peer over the bathtub to look for them even though we'd showed them to him in their little coop. I don't think he can make the connection yet between those gangly birds and the tiny peeps he saw last. He did like the ganglies, though, and carefully and thoughtfully went back and forth between the chicken feeder where the big birds eat and the little coop with one piece of chicken food at a time to give to the young'uns.
"Treat," he would say, and head back for another tiny morsel.
His vocabulary is exploding and he just slays me, that boy. We went to Monticello and had some lunch. 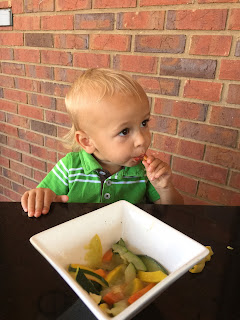 The restaurant where we ate is right across the street from the City Hall and it is encircled by a roundabout. We ate outside which was perfect for a small boy as we got to see many, many trucks at close range as well as about four people get pulled by the local cops.
It must have been Speed Trap Day in Mayberry Monticello because it was ON for the PD.
After lunch we strolled over to the Humane Society Thrift Store, Wag The Dog, and look what I found for Lily! 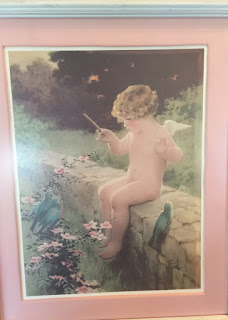 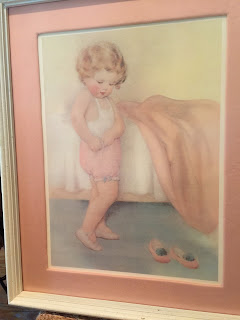 Two framed and matted Bessie Pease Gutman prints, all ready to hang in Maggie's room. I couldn't even believe that. Fifteen dollars for the pair.

After that we drove down to the Tractor Supply where I bought another bag of Chick Starter feed. My new babies aren't coming until tomorrow but as much as the older babies are eating, I knew I was going to need more food. I almost, almost, bought six baby Barred Rocks and I'm sort of sorry I didn't. I might go back and get them later on in the week. The problem is you HAVE to buy a minimum of six chicks or two ducks and really, I only want three or four but hell- chickens aren't quite like children. Once you have everything set up you might as well get some because it's not like you're going to have to be responsible for their educations and wardrobes and dental care.
Well, we shall see after Kelly brings me the new babies tomorrow.

August fell asleep on the way back to my house and so Jessie went on home and then Lily came out with the four she had with her and they had such a good time. The boys showed Lenore the chickens and the toys and some of the secrets of Mer's. I don't think Lenore had ever been here before. She's a doll, that one. Her grandmother told me that Lenore told her that she likes Mer because Mer hugs her. So you know my heart melted when I heard that and I hug her every chance I get now.
Owen showed her how to pick carrots and I picked Lily collards and kale to go in her smoothies and salad greens to make salad. I also made cheese toasts for all of the children including Maggie, and they ate them up.

And so that's what happened today and it was a good day. I feel better in all ways which is no surprise at all. There is absolutely no way to feel terrible when I can get such sweet August kisses and Maggie hugs and big kid hugs and hang out with some of my daughters and find treasures at the thrift store and give away some of the bounty of my garden. It feels as if some balance has been restored to my life, once again. And on top of all of it, Jessie and I watched a Swallow-Tailed Kite float over our heads this morning from the back yard, a bird so majestic that one feels as if one has been graced by its presence.

All right. I'm about to go pick some salad greens for our own supper tonight.