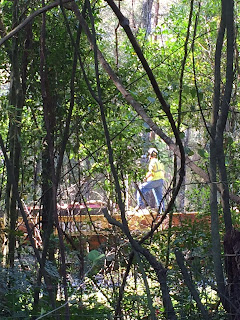 You probably can't really see much from that picture but it's a guy standing on a train track repairing thing. It's connected to a giant crane-like machine and they're working right behind my house with great machinery noises and yelling and squeaking of brakes and occasional big blasty BLAMS! and I have no idea what they're doing but I swear to god it seems like they've been working on that little piece of track forever and ever since dirt was clean and chickens were dinosaurs.

This cold or whatever I have is also annoying. I just feel so tired and shitty and not quite bad enough to get back in bed but not good enough to do anything. Mr. Moon sweated and froze for a few hours last night and did not eat any soup. He wanted some ginger ale and crackers so I drove down to the little store by the now-closed truck stop and purchased him some from the night-crawler lady who works there 24 hours a day, seven days a week as far as I can tell. She's not an albino, or at least I don't think she is, but she does look as if sunlight has not touched her in decades. The little store is owned and operated by the same family which has owned and operated it for one million years, or longer than they've been working on that little piece of railroad, and she has always been there. I have said before and I do believe this- I think she must sleep on a tiny cot in a back room.
If she is allowed to sleep.
Her fingers are practically translucent, her eyes never meet anyone else's eyes, but she sure can ring up your purchase and ask if you want a bag.
Also? They are now selling gator heads of various sizes at that store.
Lloyd is odd in some ways.
But. Back to Mr. Moon. So by bedtime he said he was feeling much better and he never did throw up and he's back at work again. I hear that Vergil never threw up either so this may be an entirely different illness than the one everyone else had because that illness certainly involved a great deal of throwing up, as well as other bathroom-related activities if you know what I mean and I feel sure that you do.

Violet is still sitting on those eggs. She appeared to have kicked another one out of the pile this morning and I took it and threw it in the woods. It's just a big pile of nasty mess at this point and truthfully, I need that tractor coop for Nicey and Dearie and Trinky and Tronky and Nora and Hawk because it's time for them to get out of the tub for at least a few hours a day and learn about dirt and bugs and so forth. When I went out to check on the situation a few moments ago, I found Trixie and Butterscotch perched on the side of the little coop. 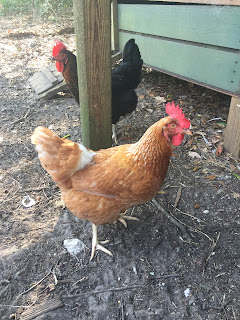 They jumped down when I started inspecting the nest but they certainly seem interested in whatever-in-hell is going on. I wish they could tell me. Frankly I believe that putrefaction is the only thing going on there but I guess I'm going to give little mama a few more days.
I have no idea why.

And that is all of the news from Lloyd although of course it's not. Every house and every mobile home and every residence of every sort whether man-made, bird-built or fox-hollowed has its own news and I would be most horribly speciescentric (I'm sure that's not a word) as well as egocentric and narcissistic to pretend otherwise.

Can I go back to bed now?