She Is Smooshing Him With Her Love 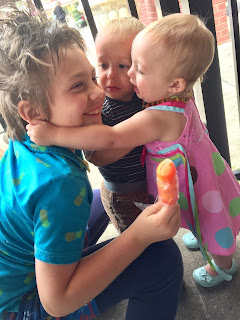 Well, here's what happened- I went and got my teeth cleaned. It was fine. I love my dental hygienist. She's about my same age and we talk about our grandkids and gardens and she's a sweetie. So that went fine. And then I thought I'd call Jessie to see if she wanted to go to Gramling's where they sell seeds and plants and cool farming stuff down south of town. It's not a modern-day tractor supply place but a very old Tallahassee institution. Although it's not time by the calendar to start planting beans and tomatoes and squash, I have the inner itch. Jessie wasn't at home, however, but on the north side of town and I said, "Well, do you want to go to Tan's?"
"Oh yes!" she texted back.
"I'll meet you there," I said. I wasn't far from Tan's which is right next door to another Tallahassee institution called Esposito's which is more of a nursery/Ace Hardware.
And then Lily called me. Owen had had yet another very small seizure at school and she had picked him up and was going to go get Gibson. I asked if she wanted to go to Tan's too.
"Sure," she said, her voice heavy with sadness and worry. She called Jason who had been to a meeting at the Tallahassee Epilepsy foundation and he met us at the restaurant too.
By the time we all got together, I had already bought two Cherokee purple heirloom tomato plants, one Homestead heirloom tomato plant, some zinnia seeds, some basil seeds, and some cilantro seeds. And a new pair of gloves.
We all ate our delicious Asian food and since we were eating outside on the patio and there were only a few other people eating out there, we let the babies wander about when they were through eating noodles and grapes and throwing what they didn't want on the floor.
And the hugging began again. 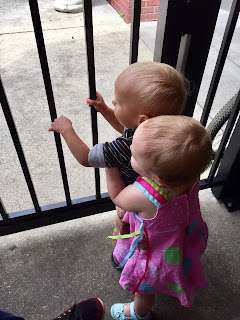 Poor August. He just doesn't know how to deal with the fierce force which is Magnolia June. 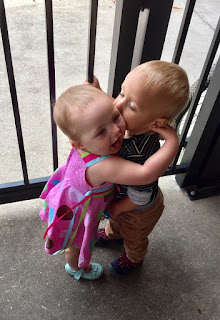 Every time we saved poor August from Maggie's embrace, she'd go right back to hug him again. 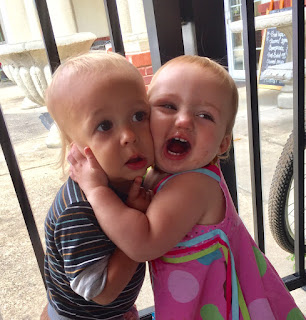 August finally cried (and I am pretty sure that some pinching was involved) and was taken up and comforted by his mama and finally all the good-byes were sorted out although Lily and Jason and her family and I all went back into Esposito's and I bought a tiny magnolia tree for them to plant over Maggie's placenta which actually went into the ground during Hurricane Hermine when all the power went out and it threatened to thaw in the freezer.

Good Lord. The child is almost fourteen months old and I've finally gotten around to getting her tree.

And then I went to Publix, came home, unloaded everything, swept up a surprising amount of feral cat-fur and dumped it outside in case a bird wants to use it as a luxury nest liner, and took a nap.
Mr. Moon has gone fishing and sent me this picture. 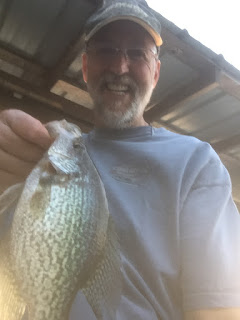 Tomorrow night we will be eating bream and crappie (that's a real true fish name) and beyond that, I have no idea what's happening.
I sure would like to plant my tomatoes and basil and cilantro seeds and maybe some zinnia seeds too. I have a rose bush bed that needs desperately to be cleaned out which is why I bought the new gloves and I'm just going to take it all as it comes because there's little use in trying to do anything else.

This has been an odd week to tell you the truth, I had to look at my phone after I went to the dentist to see if it was Wednesday or Thursday. I knew the date but not the day.

Happy Thursday, y'all. I think it's Thursday. I really do.