Dealing With What Is 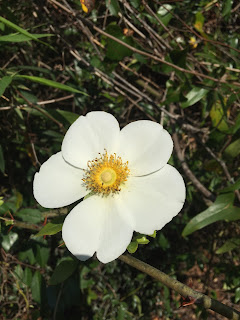 The Cherokee roses are blooming along fences and over bushes and trees in white and yellow profusion. They grow on thorny vines like gaudy necklaces for the religious who would mortify the flesh in joyful acceptance of pain.
Not me, baby.
Life is filled with enough pain for me, just on its own, thank you very much.

I woke up today with the morning anxiety and angst bad and forced myself out the door to walk. It's been in the eighties here the last few days and the humidity is already back to uncomfortable levels. As I walked and sweat, I got a call from Lily. Owen had had his third seizure in less than a week at school. The second one was very mild and this one didn't seem to be too bad either but the frequency is, to say the least, disturbing and disappointing and discomfiting and all sorts of dis-words.

I have to tell you though, that when he had the one day before yesterday, his best friend at school got an adult when he realized that Owen was acting unusual even though Owen told him he was fine. This happened in the school cafeteria, the third one to happen there which seems like more than coincidence. So it has been decided that Owen will be eating lunch in the classroom (although today's event happened in the classroom, I believe) and his friend, that good little boy who got help for him, will be eating with him every day so that Owen will not be alone. This makes me cry to think of.
There is no doubt that children can be cruel and thoughtless but it is just as true that children can be incredibly empathetic and caring and loving. And I am grateful to the school and Owen's teacher who are allowing these two best boy buddies to stick together at lunch time which will make eating in the classroom seem more of a privilege and fun than anything which sniffs of punishment or "other." Lily has already reached out to the little boy's mother to thank her for her son's loyalty and help.

Lily said that Owen was fine by the time they got home, seemed perfectly recovered, as he does usually, and then she sent a picture of Owen and Gibson and Magnolia and cousin Lenore having what Lily referred to as a "redneck pool party." Which looked like this. 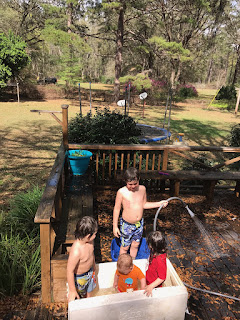 Lily is in touch with Owen's clinic and at this point we are wondering whether he is being underdosed or whether the medication itself is causing the increased frequency which can be a side-effect.
Oh, how simple we wanted this to be and it's just not going to be.

And so all of that happened today and as for me, I fretted and worried and finished my walk and came home and did the most simple of house-wifely chores which was exactly what I wanted to do. I hung sheets and clothes on the line and I spent hours and hours ironing, watching TV. I actually watched a Bridget Jones movie (what can I say?) and then a Jack Black movie which was listed as a comedy and it may have been a comedy, but a rather dark one, I would say. The D Train is the name of it and I'd never heard of it and didn't finish watching it either, although if I'd had more shirts to iron, I would have. It was one of those movies where the protagonist gets himself in so much self-induced trouble that it's painful to watch but I wouldn't have minded seeing how it all came out in the end.
There were some themes that were more intense than the usual movie-comedy-fuck-ups and that's for sure.

I swept and I cleaned out the hen house and tidied up a bit and I am tired and a bit downhearted but we go on. We may be tired and we may be downhearted, but we do go on and remember what a simple joy it is to tuck ourselves into fresh sheets, to have crisp, clean shirts to put on to face the day in, to play with a hose in a giant ice chest, to sit down to a good meal with someone we love.

Gonna go work on that now.

And here's another picture I got from the Redneck pool party event. 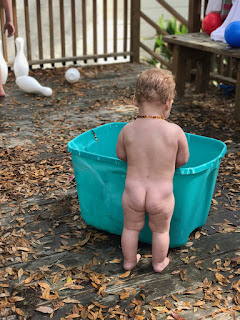 Oh, Maggie June. Please forgive your old Mer. But honestly- what could be better than that?