I swear. You want a health care provider who accepts the idea of some alternative forms of treatment, right? I mean, I do. And mine does. Perhaps to a degree that, well...
Okay. When I start talking about anxiety, she starts talking about supplements and electrical devices and, and, and...I don't know. I mean, sure, things like that might help.
But when the best two days of your past month have been the day you got oral surgery and the day following it, I just don't think that something I hook up to my earlobes to send an electric current through them is  going to cut it. I could be wrong. I surely could be.
But you know, it was okay. I got my basic exam which is not much and boy, do I need to lose weight! although she didn't say anything about that and my slips of paper to go get the mammogram and the blood work and she likes the lipid panels where they explore all different sorts of profiles instead of just the regular ones so that's good and I've already made my appointment for the mammogram and I MADE AN APPOINTMENT WITH A RETIRED PHYSICIAN WHO DOES ACUPUNCTURE AND HYPNOSIS! At the same time.
I am not kidding you.
And I asked for some anti-anxiety medication and she consulted with her back-up doc who is pretty darn alternative himself and they gave me...wait for it...a 'script for ten Valium!
Hey! Valium are cheap. Or at least the generic version of them. The ten of them cost me $1.43.
Do people even still take Valium? I guess we're fixing to find out.
Anyway, I feel pretty good and in no need to take anything at the moment, although I'm exhausted. The moral fiberous energy it took to walk in that office just about drained me. And then I went and had some documents scanned and sent and more on that later. And I ran by Fanny's to give Taylor a birthday card because it's her birthday and I love her and I also took her and May both little flowering plants from the Publix which will die but before they do, they'll be pretty. May is still sick and I should have taken her Sudafed but I didn't. I doubt the plant is going to help her very much but it won't hurt her either.

Okay. So finally we got some ice stuff falling from the sky here. Every one in the blog world and on Facebook from Tallahassee is posting pictures like this 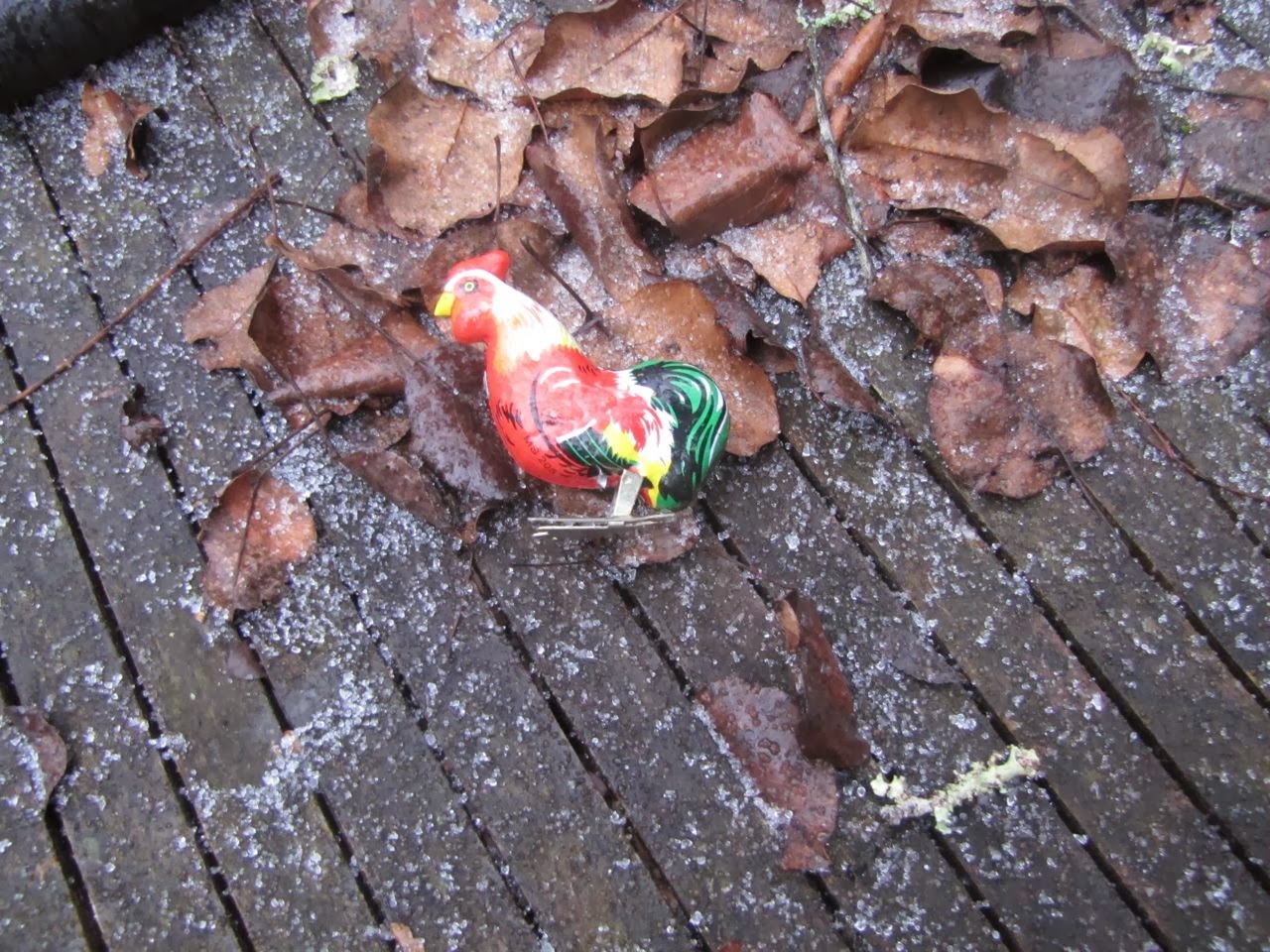 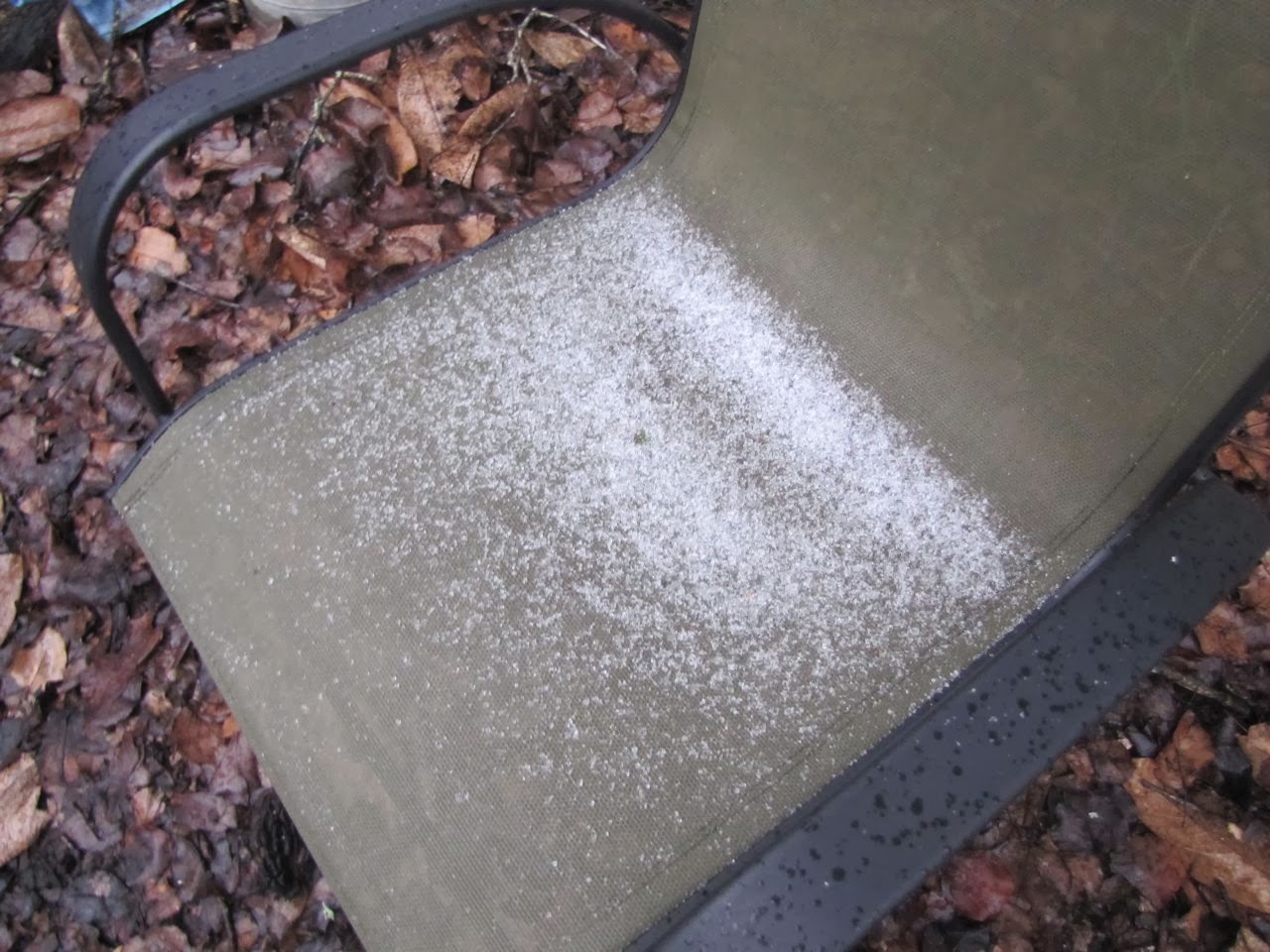 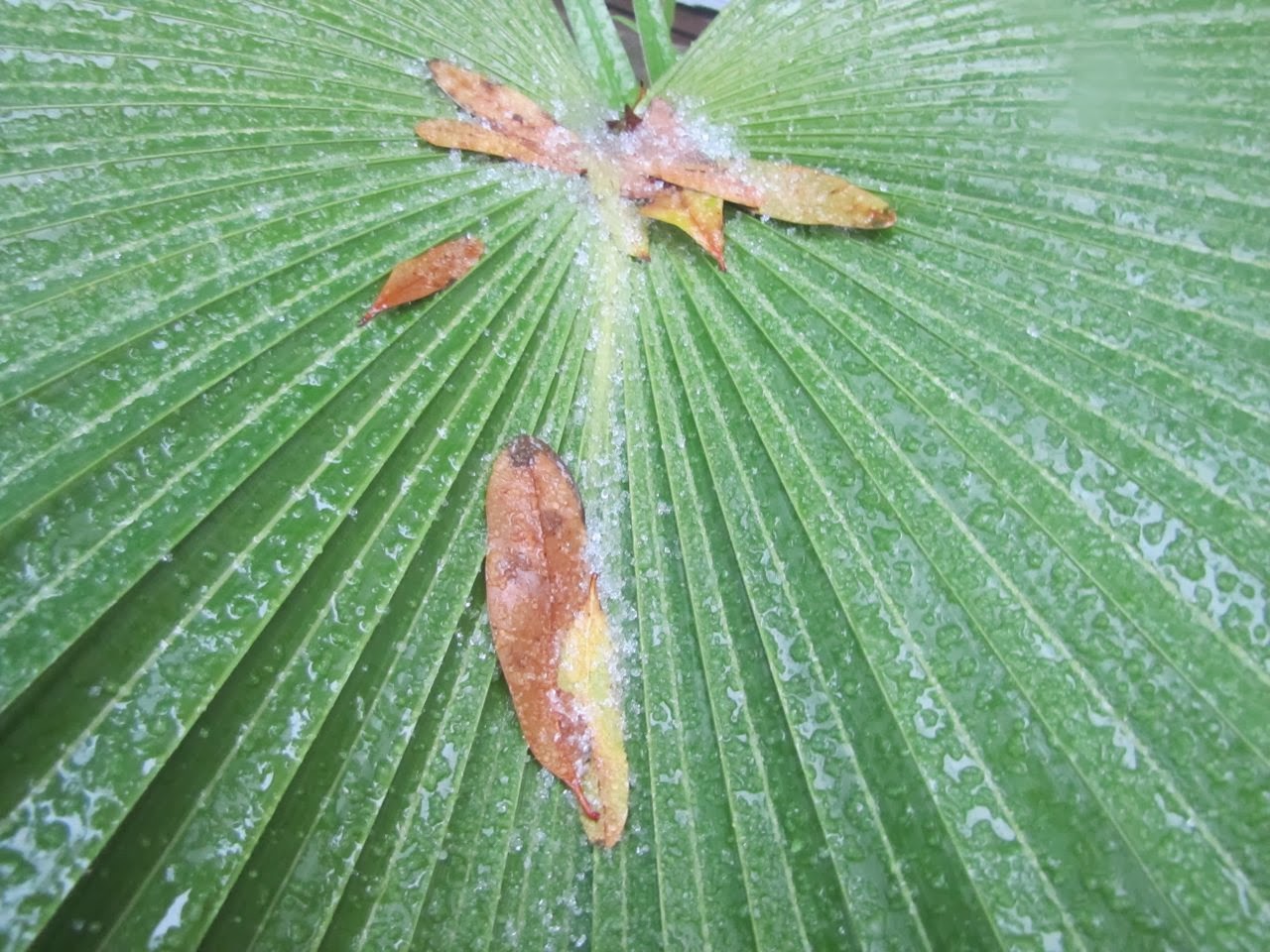 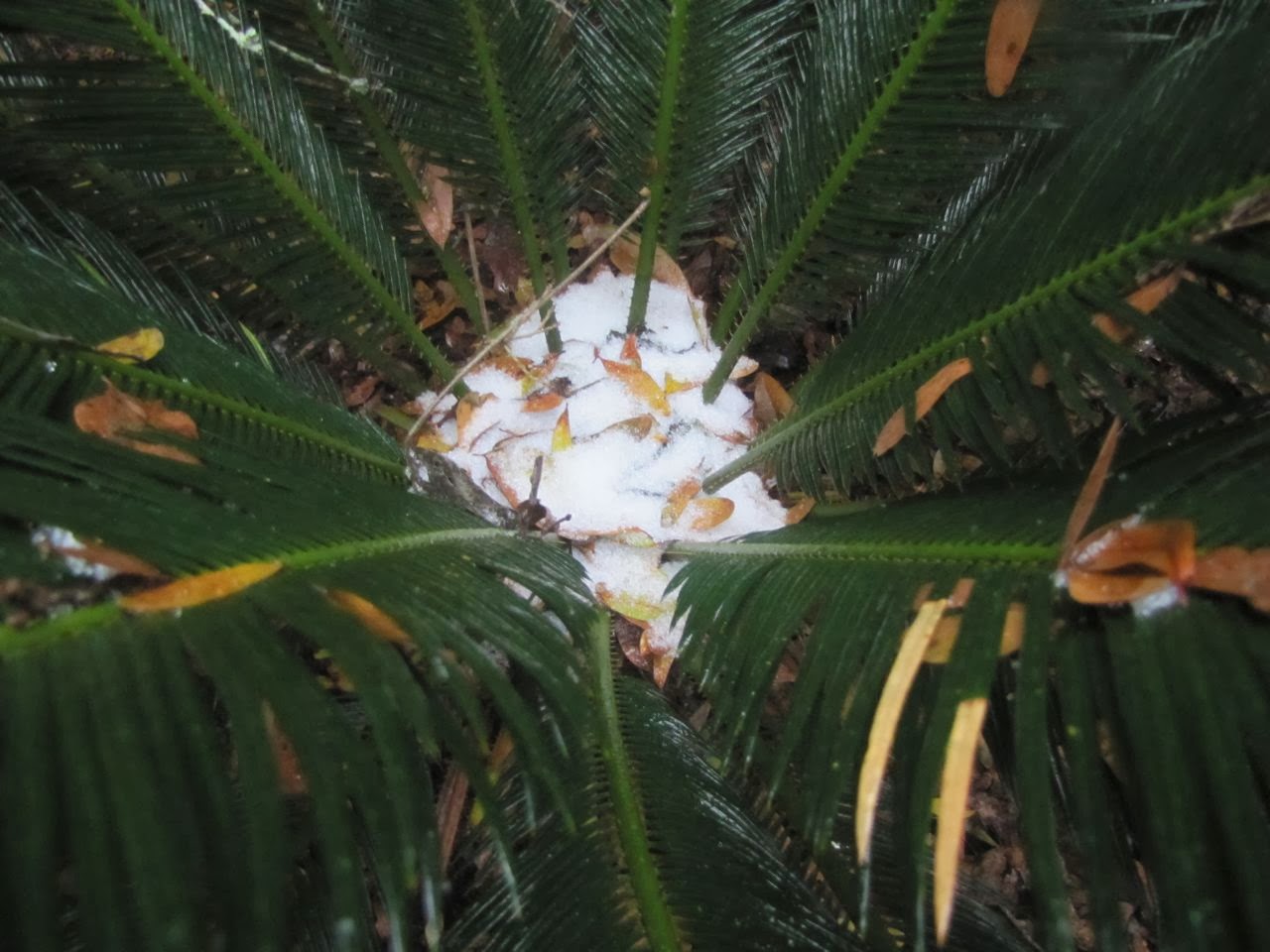 because we are so fucking amazed that ICE STUFF is falling from the sky.
So of course I had to as well. Just out of curiosity- is this what you call sleet?

Lily took the boys outside to play in it. She probably told them it was snow. She said they liked it for a few minutes and then that was enough and they wanted to go inside.
Gibson is going through a deviled egg stage. I got a text from Lily today that said, "Just had to make Gibson deviled eggs in like 5 seconds because he was screaming eggy and throwing himself on the ground."
He ate three halves of deviled eggs when we were at Fanny's yesterday. He would eaten fifty if we'd given them to him. The boys are coming over tomorrow morning and I've already boiled some eggs to make the child eggy. He did not want me to leave when I dropped by there for a short visit this afternoon.
"Mer-Mer!" he screamed, holding his hands out towards me. He was just tired. Owen barely looked at me. He had a friend over and he was too busy playing. I demanded a hug and he gave me one but I'm not sure his heart was in it. Oh well.

So it didn't turn out to be the worst day of my life. Not by a long shot. And I'm sure that my NP would prescribe me an antidepressant if I asked her for one. I'm just thinking/hoping that this run of anxiety is going to run its course like a bad case of the measles and I know I've had some good days in it and now I have a little back-up panic medication which is, in and of itself, a calming thing. Once I get this blood work and mammogram over with, I think I'll be okay.

All right. Time to make the supper. Chickens are up, all of the water spigots are dripping because it's supposed to get down to 22 degrees tonight. Speaking of chickens, they do not like the cold ground on their bare feet. They were all high-steppin' it today. Here's a picture of Elvis. Just because. Isn't he a handsome thing? 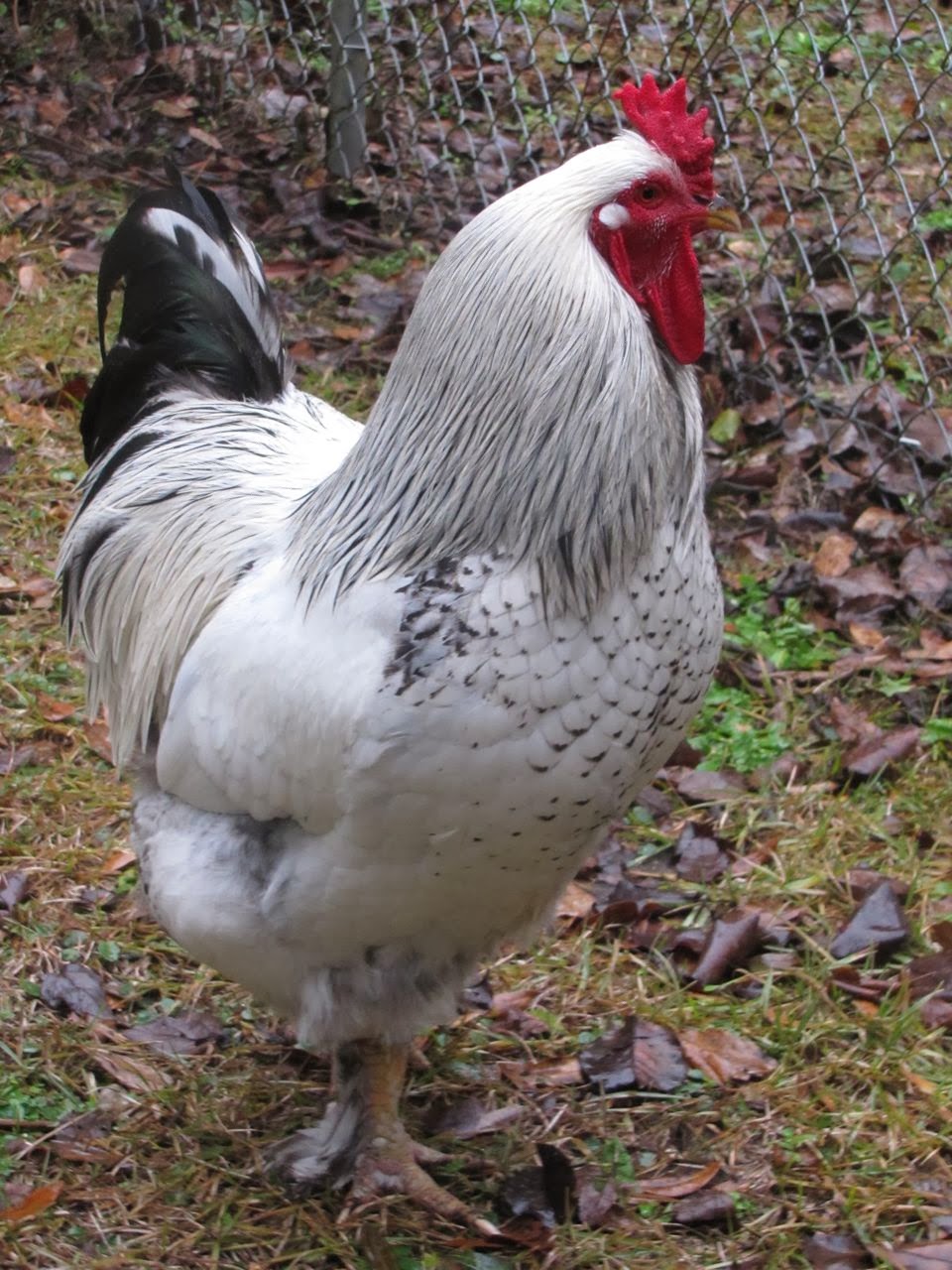 I have one more thing to say- I want to sincerely and truly and really tell all of you who have commented with your own stories of doctor and dentist fears, of anxiety and depression and the difficulty in getting through the most mundane of situations and days sometimes- I love you. You have made me feel so much less alone. You have given me hope and reminded me that I am probably not dying, just experiencing something which is so very human and which so very many humans experience.

Dang! I love you!