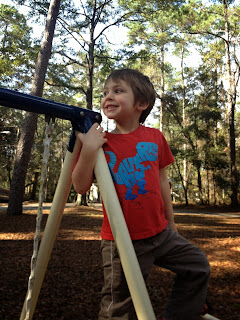 After Jason came home to relieve me of boy-watching duties I went into Publix to pick up a few things and I lolly-gagged around and chatted with Lily a little, and also Ms. Judy who does the meal demonstrations and when I left the store probably thirty minutes after I'd walked in, it was pouring rain. I mean, those big fat drops and lots of them and it was like, "Where the hell did THIS come from?"
And isn't that life? One minute the sky is clear and the kids are running around outside and it's warm and the next minute, clouds come scooting in like, "Oh! Sorry we're late! We'll get right to it!" and there you go.

But I just drove home the back way which is what I usually do anyway, slowly, as is my wont. I am now one of those sittin'-low, drivin'-slow old biddies. Fuck it. I'll get there when I get there.

Owen is on a kick of wanting to "in charge." This takes the form of, "I'm going to be in charge. You have to do what I say."
"Mmmmm," I tell him. "We'll see about that."
I do what he says if it's reasonable and I'm in the mood. Otherwise, nah. He deals with it. Plus, he's a fairly benevolent despot. The most outrageous thing he asked for was a smoothie and I made him one. It was delicious.
Gibson didn't have his Boppy around so I got all his hugs and kisses. Then he fell asleep on me. It was nice.

So it was a good day and now I'm home and Mr. Moon is out of town to go to auction and it's still pouring rain. I shut the chickens up sweet and dry and fed the kitty cat. I found another egg today in a pot on the porch and that makes two hens which have resumed laying some. After all these years, I still feel blessed when I get an egg and isn't that silly?

No, actually, it's not and I am glad to be a human being for whom the small miracles of life never cease to give me pause and wonder, whether they be an egg, a child falling asleep on my lap or a rainstorm coming up out of nowhere.

That's the news from Lloyd tonight.