Yep. This Is My Life 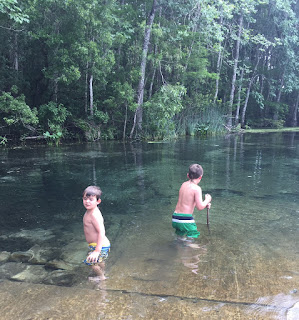 Lily and the kids and I went to the river today and we just never seemed to get into the groove with it. I don't know whether it was because Maggie was a little fussy or because Owen was being sort of an unhappy pre-teenish type child or what but it just wasn't the best trip ever to the Wacissa.
And then the yellow flies started biting and we said to hell with this, and packed up everything and left. But the water was refreshing and the world's population of yellow flies is three less than it was this morning so there is that.
May those fuckers roast in hell.

Speaking of insects, I had a run-in today with what might possibly have been the biggest roach I've ever seen. It was on my kitchen counter and I was paralyzed by its size and since I had neither a sledgehammer nor a Hazmat suit, I did nothing but let it crawl under the toaster oven.
I gathered myself and rolled up a sturdy magazine and gently lifted the toaster oven and the monster ran into the sink where there wasn't enough room to wield the magazine to good effect so I trapped it between a glass and a plate and threw it outside to the chickens but they were probably too terrified at the size of it to eat it.
Then again, maybe not. I've seen chickens eat lizards and I hear they also eat mice so...

So much nature. And what do you think of this? 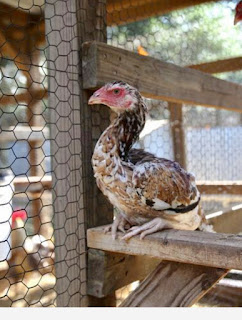 I stole that picture from the online version of the Tallahassee Democrat about a local lobbyist who raises chickens. That is a Shamo chick. The breed comes from Japan by way of Thailand about four thousand years ago and if that isn't the most dinosaur-looking critter you've ever seen then you're a time traveler and have seen the real thing. Here's what an adult can look like. 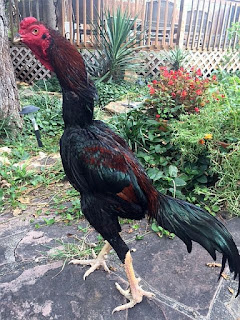 They are classified as "game fowl" and I'm not even sure why they're considered chickens but then again, I really don't know shit about the ins and outs of chicken breeds.
And no, I am not getting any. They cost a lot of money.

Since I'm being so random, here's a picture I took on my walk today. 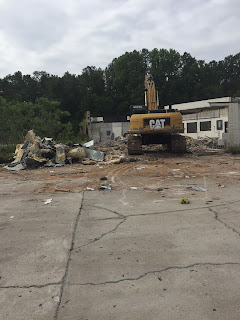 They're tearing down an old and long-closed convenience store across the street from the also torn-down truck stop.
Dammit. Lloyd appears to be devolving.
I swear, when I lived a few miles down the road from here back in the seventies, there was a beautiful country store run by Miss Ruby, Israel's store across the street from that, the truck stop and that convenience store. Miss Ruby's store got burned down, Israel had to retire because of health problems, the truck stop got torn down because it was an environmental hazard (that's my guess) and now there goes the abandoned convenience store. We're left with one other ratty convenience store- the one where the woman who appears never to have been exposed to direct sunlight in her life works, and a Subway.
Seriously. That's it. And a post office and about 597 churches.
So you can buy beer, ice, a sandwich and candy. And that's about it.

Well, that's life in Lloyd and obviously it doesn't bother me too much.

I'm going to make our noodle soup tonight and am cooking the last three collard leaves I have. The remaining few precious peas will go into it too. We've gotten a little shower which brought the temperature down some and Mr. Moon is going fishing tomorrow and will be leaving at 4:00 a.m.

I'm going to go pick some cilantro for the soup.