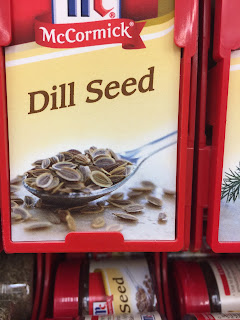 Well of course the Winn Dixie had dill seed. I bought four jars and that should do it. We opened a jar of my bread and butter pickles and Mr. Moon does not like them. He must absolutely not like them because he'd try to fake liking them if he just sort-of didn't like them.
I think they're great.
Oh well.
Maybe he'll like the dill pickles when I get around to making them. I also better get to it on the fourteen day pickles but that involves a lot of cucumbers.

I feel useless today and pretty much have been. I did finish Maggie's dress, buttonholes and all but I didn't do any embroidery. It's such a simple dress. I could have made it in two hours if I'd just gotten to it. I also fertilized my pepper plants which are all about eight inches tall except for the ones that are smaller. I have no idea why they haven't grown. They've gotten the same treatment as the rest of the garden which is growing fine. I also made a very decent weekend/holiday breakfast involving a fried biscuit. I made biscuits last night and Mr. Moon claimed they were the best biscuits I ever made and said, "Please remember how you did this."
I gave him a look and said, "You know how I cook."
Anyway, I made five biscuits and he ate four of them. I was lucky to get one. They were pretty decent, I have to say. Mr. Moon amused me by imitating Paul Hollywood and Mary Berry from the British Bake Off in describing them. He's a funny guy. I love him even if he doesn't like my bread and butter pickles.

And I have absolutely nothing else to talk about. Same-same-same-same-same-same-SAME!
Which is fine.
Just makes for boring reading.
It cracks me up when I read my posts from years past and realize that I do about the exact same thing every day that I have been doing for years. The main differences are the number of grandchildren and the names of chickens. Since my life is so swell, this is all fine by me. Some years it rains more than others. Some years the tomatoes do well and the cucumbers don't do squat. Some years my anxiety is terrible and some years it's not so bad. But overall, I grow the same things in the garden, I love my chickens whichever ones I have, I adore my grandchildren, whatever number and age they may be, I bemoan getting older, I water the same plants on the porch, I beat myself up for being such an anti-social hermit, I read a lot of books, and I am grateful beyond measure that I have this life with these trees and this little piece of dirt to play with and a husband whom I love and adore and who still makes me laugh after all this time.

And the Winn Dixie in Monticello still has dill seed.

Can you believe I've been using the same dill pickle recipe for forty years?

Hey. If it ain't broke, I'm not going to fix it.
Now...maybe the bread and butter pickle recipe needs tinkering with...

And here's a picture of August whom I miss so much it hurts my guts. 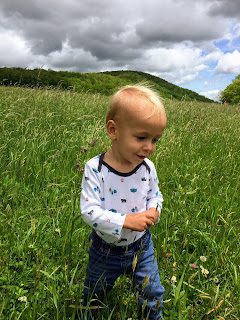