Life In Lloyd, Part A Million

That's a pretty crappy picture of a fallen pine in the swampy area that I pass on my walk. It's almost an entire city block (if Lloyd had blocks) of woods and ferns and palms. I can only imagine the animals who live in there. Nothing too big of course because it's surrounded by pavement and there are houses on one side of it, but I imagine that a lot of possums and coons and rabbits live back in there. I've seen hawks in that area so they're probably nesting there along with who-knows-what other kinds of birds.

As I got on the entrance to the interstate today to come home from town, I saw another hawk sitting on the grass fairly close to the road. This is not normal hawk behavior and I wondered if he was injured but he looked perfectly fine, merely sitting there, looking at everything with his hawk-eyes.
I took the interstate instead of the back roads because I wanted to get home. I'd started out my time in town with these two, having lunch and that part was lovely. 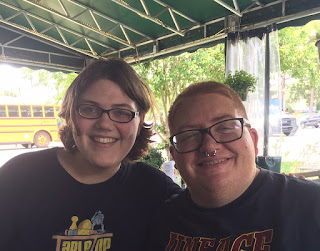 But then I decided to go to Target because I wanted a new dish drainer.
Jesus Christ. I don't even know why. Because mine was funky despite my efforts at cleaning it and I guess someone has to buy that shit made in China so it might as well be me. I had a small anxiety attack in the store and did not spend time leisurely looking at shit. I sped through, picking up a tank top, a black bathing suit bottom, a few personal hygiene items, and then bogged down completely trying to find the fucking dish drainers.
I finally found someone to ask and of course they aren't in the kitchen section because that would be too obvious but on the aisle down from the light bulbs. Then I panicked because I can never remember whether I need the LARGE dish drainer or the SMALL dish drainer and by god, I was not going to leave that store without a dish drainer and so I got the small one, figuring that even if it was too small, it would at least fit in the sink.
Guess what?
I needed a small one so that worked out well.

I was so glad to take the exit into Lloyd. So glad. I passed the place where they tore down the truck stop and are building another one if the local gossip is true, and then that spot of swamp and woods in the picture above. Took a right at the light and I was home, baby.
Phew.
Safe.

It's Friday night and so I'm sipping a martini and I have pizza dough rising. At Publix I almost just bought a frozen pizza but I couldn't do it. I am on the back porch and keeping half an eye on the activity by the chicken coop. The two young roosters I have named Little Richard and Joe Cocker (get it?) just had their evening bow-up and now Mr. Moon is setting up a trail cam. Why? Because last night we were negligent and didn't close the door to the hen house soon enough and some critter got in and took Hawk, that pretty little black hen I posted a picture of just a few days ago. I know that it was either a raccoon or a possum but Mr. Moon wants to know exactly what is stalking our chickens because- again, I don't know why.
He's a man.
We just need to close the damn door as soon as they go to roost.
But it gives him a project and that is important.

It's supposed to rain the next few days and I'm sure hoping it does. We're dry and I crave the smell of rain, the sound of thunder, the sight of cracking lightening.

And that's the news from Lloyd today. I hope everyone is having a happy Friday. Or at least a decent one.