Projects And So Forth 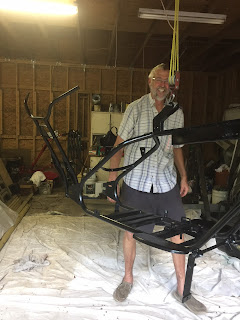 Don't quite know what you're seeing there? Well, it's not your fault.
That, my friends, is a man standing in the middle of some Cushman scooter parts which have been hung from the ceiling so that he can paint them.
Yes. That's right. I think it's rocking sort of a Calder mobile effect, don't you?

So that's what Mr. Moon has been working on today. Mostly.

I, of course, was determined to make pickles which meant I had to go to Publix. Before I left the house though, I got this text from Lily: 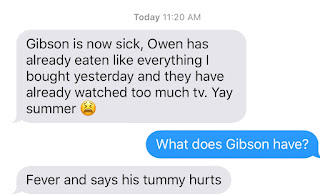 So of course I texted her back and asked what she needed from the store which gave me an excuse to play Benevolent Mother AND get to see the grands for a short visit. Now I swear to you- shopping at Publix is usually a pleasure but today I had a hard time. THERE WAS NO DILL SEED IN THE WHOLE ENTIRE DAMN STORE! They have canning jars and pickling salt and vinegars and pickling spice for sweet pickles and even jar lifters but NO DILL SEED! I can remember going through this painful realization before and as I recall, I had to go to Monticello to the Winn Dixie where making pickles is a way of life for dill seed. Anyway, I finally got everything I needed except for the dill seed and took Lily's groceries to her. Owen is doing that growing boy thing where he wants to eat endlessly and without ceasing and Lily is beside herself. I have suggested that every morning she give the boy his day's allotment of snacks and make him in charge of eating them when he wants. If he eats them all by 10:30 a.m. then so be it. He'll have to make do for the rest of the day with his regularly scheduled meals.
Lily would like any other suggestions that y'all might have, knowing that many of you have raised/are raising boys. She needs help because honestly, both Owen and Gibson act as if they're being starved if they don't get food every fifteen minutes.
But it was good to see the children and I swatted Owen on his butt when he told me that his mother doesn't feed him but only with a cloth grocery bag.

I came home and determined to make bread and butter pickles since I couldn't make dill pickles and so I did. 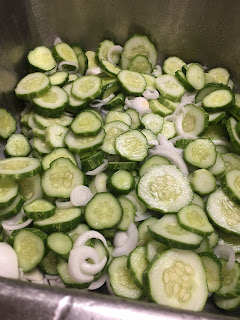 That is approximately nine pounds of sliced cucumbers and onions in my sink after they sat with salt and ice on them in the refrigerator for an hour and a half. 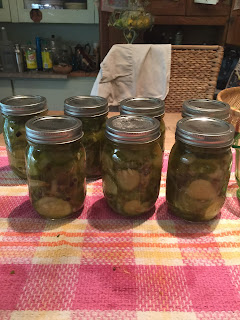 And that's what all those cukes and onions made. Seven pints of pickles. All of which popped and sealed and I am happy. I hope they're good. They probably will be. I mean- cucumbers, onions, vinegar, sugar, spices- what can go wrong?

I hope I didn't just curse myself.

After I got the kitchen semi-restored to order, I sat down with my sewing machine and my Greist Buttonholer attachment. This is an amazing little device which I love and which was created to fit on a Singer like my old one. I have used it many times before with great satisfaction and success but it's been so long that I had to get the booklet out to remember how to attach the attachment. 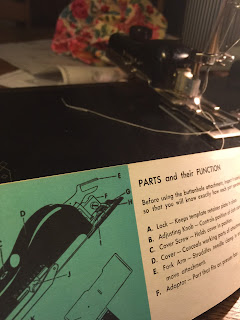 Just like the instruction manual that came with the Singer, the Greist buttonholer came with instructions that are perfectly written and illustrated so that even the most device-challenged among us can figure it out. And I was sailing along, changing out the template and screwing in the guard plate and blah, blah, blah when I realized that I do not have the required screw to attach the buttonholer to the machine.
Where did it go?
It's not in my sewing machine case. It's not in the box where the device and the templates live. It's not anywhere that I can find. I am hoping that Mr. Moon can help me find a suitable substitute but right now, he's working on his boat trailer. Which is another ongoing project. Which is to say it's been going on for about a year. 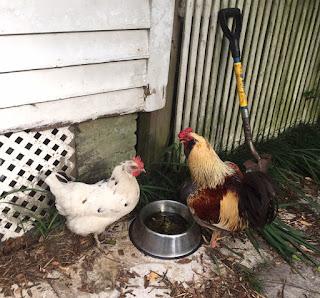 Mick and Dottie. Dottie lays an egg almost every day. 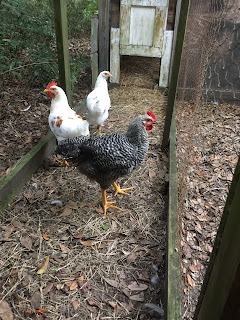 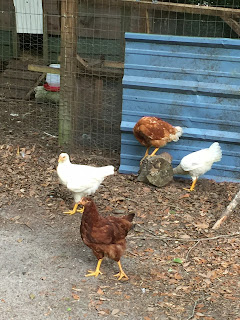 Trinky, Nicey, Nora, and Tronky.
Not a good picture but I do like the way Nicey's feet look. Are those some chicken feet or WHAT?

None of the young'uns are laying eggs yet and I am about to be frustrated. We've probably already spent hundreds of dollars on chicken feed, grapes, hay, special vitamins and probiotics getting these chicks raised and so far, they have given me nothing but, well, pleasure.
I guess it's a fair trade.

And that's what my day has looked like. I am hoping that Gibson feels better soon. When I left his house he was eating (of course) a salad made of Romaine lettuce and Ranch dressing which is what he had requested. I told all three children not to drive their mother insane because if they did, she'd have to go to the hospital and I'd have to take care of them (I'm not sure where Jason would be in this imagined scenario) and I'd just lock them in the chicken coop all day.
They were not impressed.
Nor were they scared.
I guess they know that I can't even stand to leave the chickens in the chicken coop all day.