Was This A Great Weekend Or What? 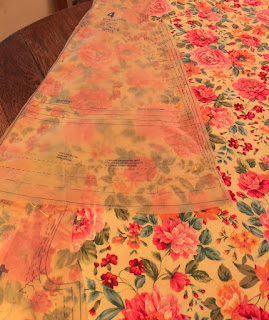 Well, it has been just about the perfect weekend for me. Yesterday I was fairly productive and got a lot of stuff done in the garden including planting, as I said, and it rained which bodes well for the little seeds in the dirt, and I made two great suppers and today I mostly rested. Seriously. The only thing I've done today is to make breakfast for Mr. Moon and Lily and me and to lay those two pieces of pattern out which will be part of a dress I'm making for Miss Magnolia June.
There was also a game of gin rummy (I lost- who cares?) and some watching of Miss Fisher's Murder Mystery, and some excellent marital snuggles.

The bug bites sucked but that's just life. If you live in North Florida, anyway.

So do you want to hear what I made for supper last night? 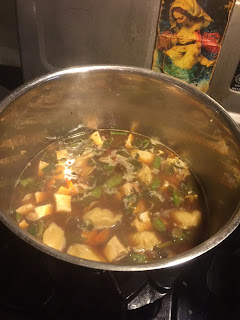 Okay, that doesn't look like much but in all actuality, it was the very best noodle soup I've ever made. And healthy? Put your hand on the Bible, babies, this soup would cure your ills. Broth and tofu and garden onions and carrots and snow peas and ginger and collards and millet and brown-rice noodles and a few dumplings. Mr. Moon kept saying, "This is the best supper ever!"
Which is weird because it didn't have any venison in it.
And to balance all the healthiness out, I made 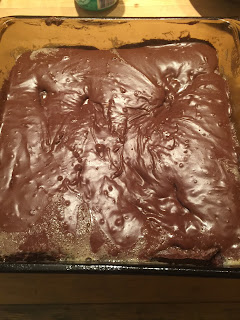 brownies with pecans and extra frosting!!!!!

So tonight we're having leftovers of pizza and noodle soup and brownies.
I'm way too excited about that to be a normal person.

So why did Lily come over for breakfast without her children?
BECAUSE SHE HAD THE FIRST WEEKEND TO HERSELF WITHOUT KIDS SINCE OWEN WAS BORN!

Jason and his mother and brother and sister-in-law and Owen and Gibson and Maggie and darling Lenore all went down to Cocoa Beach for a ceremony honoring Jason's dad (among others) who was a police officer who was killed when Jason was a little boy. Of course they did a lot of other fun things like go swimming in the motel pool. Jason posted this picture on Facebook. 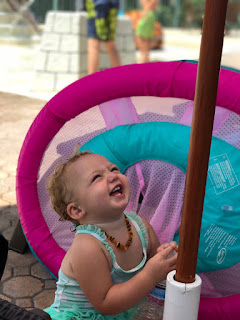 You can see just how much Maggie suffered, being away from her mother.
That child.
But Lily had some much needed rest and went out with Hank on Friday night for supper and drinks and came over here this morning to visit her old ma and pa and eat some eggs and biscuits and grits. I'm so glad she got the rest because good Lord, she needed it. And deserved it.
And Jason gets the Dad of the Year award for offering her the weekend off and having such fun with their babies.

I remember once when Mr. Moon took all of our kids to Nashville to visit his parents and gave me the weekend off.
No. I will not report what all I did but trust me when I tell you it was wonderful and delicious and mostly legal.

All right. To round things out, here's a picture that Jessie sent me. 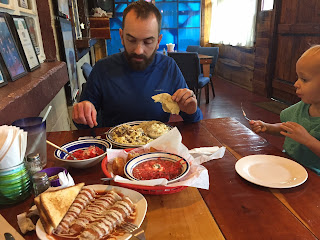 She and Vergil and August went to a family wedding in Lexington and on the way back to Asheville they stopped at a restaurant in Tennessee which is owned and operated by former Russian circus performers.
In the middle of nowhere.
They ate stroganoff and borsht and stuffed cabbage. 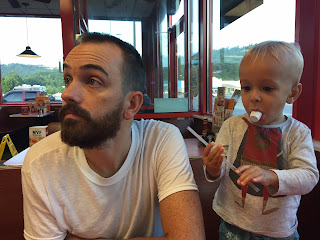 And here's another picture of her handsome lads at a Huddle House which for those of you who do not know is like the rip off version of the Waffle House but which can serve a mighty fine breakfast.

So it's been a good weekend and Lily just texted a picture of Maggie nursing and the words, "All is right with the world," and they are all home and they were all excited to see Mama. My chickens have made me laugh, my garden has made me feel wealthy and happy, and my husband has made me feel loved.

I could not and would not ask for anything more.