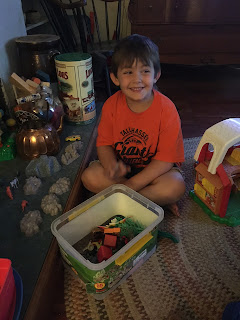 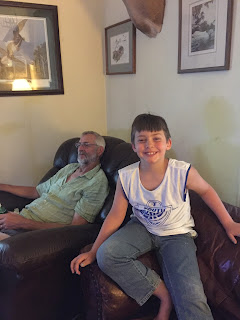 My big boys are here to spend the night and I'm glad to have them. Right now they're in the Glen Den, watching baseball with Boppy and building stuff. A little while ago Owen painted his brother's fingernails blue and I painted Owen's blue. Boppy was a little unsure about this but Owen pointed out that his mother had already painted his and Gibson's toenails bright sparkly red.
A real man is not threatened by corporeal decoration is what I say.
Plus, summer is here and the time is right for not only dancing in the street but also for trying out new ways to express personal style.
That's what I say, anyway.

I've had such a good day with plenty of energy. I went on a walk which started out tremendously. As I was just about to the corner, a van pulled up and in it was our dear Juancho and some of his kinfolks and they were on their way to the Florida Folk Festival and I got a stellar hug from Juancho. He's one of those people who, when they hug you, let you know for sure you've been hugged and you just feel better about the world in general and go on with a lighter step, which I did.
Both.

I came home and ate some lunch and then got out in the garden and dug up all the rest of the potatoes and did some weeding and pulled the spent lettuce and then harvested the rest of the onions and shallots, trimmed them and set them to dry with the others. I planted one packet's worth of edamame beans and then I picked green beans and cucumbers and Lord, it is past time to get out the canning kettle. I planted my little Ashe Magnolia and the other things I bought at the nursery the other day and gave the chickens fresh water.

Owen is helping me to write this by hanging over my shoulder and reading as I go. He asked me why I blog and I showed him by going back to 2011 when he was just a little guy and we looked at videos and pictures and saw Elvis and old Buster and even Trixie who is still alive. 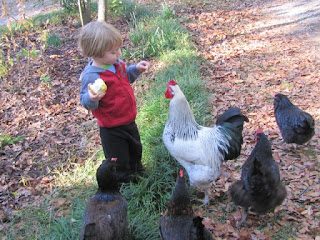 Do you remember when Owen was my little Prince Rock Star and Elvis was just a young rooster? 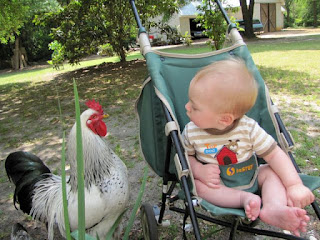