I'm in a fairly good mood, riding the waves of endorphins which were released when I left a doctor's office today. My doctor doesn't do the bio-identical hormones and doesn't feel comfortable prescribing them because he doesn't know enough about them so he sent me to another doc who does prescribe them and I had to go see him today.
I took my Ativan and made my way to the office and paid up front because that's what you do and looked at the pregnant ladies (this doctor is an Ob/Gyn) and read the book I'm reading right now (Connie May Fowler's, A Million Fragile Bones) until they called me and then I went through the little speech about having extreme doctor anxiety and white-coat hypertension and etc. and even with the Ativan my BP was pretty high but the doctor said, "Well, it could be worse," and then I felt a little better about it.
I had really thought I was just going to talk to him but he asked when my last Pap was and I said, "Oh, three years? I don't know," and he said, "Well, you want to do one today?" I figured Why not? because I was already disassociating so nicely that I might as well have been in a space capsule on my way to Mars or in a bistro in Paris waiting for my croissant and espresso or, in a coma for that matter.
That was all relatively painless and I have to say I liked the guy. He told me that he himself had just had his first physical in sixteen years and yeah, he knows that's not the way to be but...well.
He also told me that his wife goes to my primary physician and we agreed that he's great and I do feel lucky to have him as my own doctor.
So this guy is going to prescribe my hormones and that's good but when I went out to wait for my paperwork, I noticed a lot of Trump stuff. Yeah. In the area where they do blood pressures and weigh you and chart.
"So you're a Trump supporter?" I asked, and he went off on a mild rant about health care and how awful the ACA has been and how we're headed to one-payer and we can't let that happen because it's awful, just ask anyone in any country who has it.
I tried real hard not to raise a ruckus. I mean- what good would it do? I'm not going to change his mind and he's not going to change mine and I need those hormones.
Does this make me an asshole? A cowardly asshole?
I did tell him that I have kids who have health care now for the first time because of Obama Care but he insisted that it probably wasn't very good health care and that anyone in this country can get health care by going to the ER. I said that that wasn't really the best way to get it and he agreed but we both sort of let it drop after that.
What do you do? It takes everything in my body and mind to get me to call and make an appointment and then an act of Congress and a dispensation from the Holy Father before I can actually walk into a doctor's office and I had done both of those things and the appointment was over and so fuck it.
I am not ignorant of the fact that it's a sad day when a doctor who has chosen to take care of women and deliver their babies voted for the pussy-grabber but for some reason I'm feeling rather sanguine about it. If there's one thing that Trump's election has shown me it's that even seemingly intelligent people can have completely different beliefs than mine and that's just the way it is. I can choose to spend my whole life making every choice I need to make based on those beliefs or I can speak my piece in a rational way and get on with my life.
I'm not hiring him to be my friend. I just don't want to have a life of one constant hot flash after another, and urinary continence is definitely something to cherish.

So that was my going-to-the-doctor story and I went to Publix and then I came home and had to take a nap due to not only the Ativan but also the adrenalin drain. I still feel a little hazy and weird.
I picked another ten thousand green beans and pulled up two more collards and now I'm going to make supper.

Jessie sent me a picture of August today. 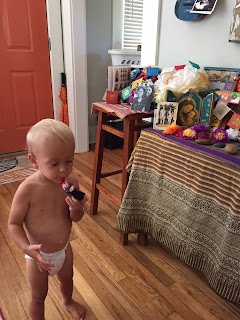 Her text read, "August loves to take the little animals and dolls off of Dana's altar and kiss them over and over again."
She and Vergil are staying in Asheville with their friends, Matthew and Dana and Dana is pregnant too. Who knew August was so spiritual but I remember when Owen used to love to go out and see the Buddha which he called "Buddhy" every day when he was here and kiss its bald head. And remember when he used to put the turtle door stop on my own altar and cover it with my woods-found turtle shell?

My little babies. My precious little sweetlings. Who KNOWS what goes on their heads? I surely don't. All I know is that I love to observe what they do and get whatever kisses I can get from them.

Life goes on and I don't pretend to understand one bit of it.
Or, to be succinct, I don't know shit.