I Kissed My Babies A Lot 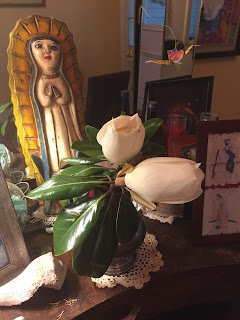 Woke up this morning after another house dream where my friend Lynn was still alive and although I could definitely remember seeing her dead for sure, she was also definitely still alive and I reconciled these facts by saying, 'Honey, they really misdiagnosed you."
She helped me move an ancient couch up some stairs and she was completely her old self- strong and smart and capable.
Ah, dreams.
Checked my phone to see what time it was and found three texts between Lily and Jessie. This virus has hit Lily hard and she said she could hardly sleep last night for her ear hurting and she was thinking about going to the doctor and so I knew it was time for me to get the hell up and go take care of Maggie so she could do that, and so I did.
Jessie brought August over to play and Jessie and I watched them move things from one place to another and walk around and run around and talk their words, some English, some Baby. Maggie still does that thing where she has complete conversations with perfect expression in which not one word is recognizable but you know that she absolutely knows what she's saying and positively assumes that we do too. Both of those children are so precious I sort of want to just scoop them up and eat their toes off and I know I've said this before but it's a miracle that I've never chewed a baby digit off. You know how some people, when they're standing on something really, really high have the almost uncontrollable fear that they'll fling themselves over the edge? I have the same fear about biting a baby's toe or finger off. I mean- I know I won't but GOD! what if I did?
Maggie went in for the big hug on August at least once, holding him tightly around the neck while closing her eyes and smiling as if in ecstasy while August appeared to be afraid to so much as take a breath.
"The woman child animal gives her prey the Baby Death Grip which paralyzes him completely."
They finally both got tired and Jessie took August home and I gave Maggie a peanut butter bread and she climbed up on my lap and I showed her pictures on my phone which strangely enough are almost all of either her or August or her brothers. She stared at them intently and I began to sing a little song, incorporating the names of all the people in the photos and before I knew it, she was breathing so regularly and she dropped her peanut butter bread and fell asleep, her head on my old bosom. I put the phone down and took her into her parent's room and laid her on the bed.
Soon after that, Lily got home with Gibson. After waiting for hours to see a doctor in a freezing exam room, she had been told that what she had was probably not an ear infection yet, but that it might become one, blah, blah, blah. She was told to take decongestants and was given a prescription for an antibiotic if the decongestants don't work.
I kissed Gibson and packed up my stuff and came on home and that was the important part of my day.

I experienced some vast relief this morning when I was perusing Facebook. I had seen an acceptance of the Rolling Stones for a music award a few weeks ago and they were all there except for Keith and so I was worried that there might be something wrong with him but the Stones had posted this


which leads me to believe that Keith is just fine.
You may think I'm joking but this really was a relief to me.
Yes. I am insane. So what?

I also saw on Facebook that our Sophie is in the hospital and I've been thinking about her and Elizabeth all day long as I'm sure most of you have too.  May that girl be right as rain soon.

I got the zinnias planted. Mr. Moon got the garden sprinklers working. He brought me those magnolias. Tomorrow they will be as open and large as Jimmy Carter's heart.
I'll take their picture.
I promise.