Things I Do Not Know And Things I Did Not Do

I did not make pickles today although I did get out the canning kettle. I began to peruse my recipes and realized that my dill seed was a bit old and that I didn't have enough of it anyway. Also, I probably need more pickling salt. And I might as well get more jars while I'm at it. And lids and bands.
But besides that, I have everything I need!
Haha.
I want to make dill pickles and I also want to make fourteen day pickles. Fourteen day pickles are called fourteen day pickles because it takes fourteen days to make them. It's an investment in time and cucumbers and sugar and they are terrible for you but so what? They are delicious. There is no candy on earth as sweet as these pickles plus they also have a ton of salt in them which makes them even more toxic. I should make some mustard pickles with onions and green beans and maybe I will. When I was a good hippie woman I used to make all sorts of pickles and preserves and canned sauces and I know I've discussed this before but at one time I did all of this and had no air-conditioning so it was like 129 degrees in the kitchen as jars bubbled away and vinegar simmered on the stove and I filled up the sink washing things I had grown before I sliced or diced or did whatever I had to do to them before I packed them into hot jars, poured simmering vinegar or whatever over them, put their lids on and canned them.
Then I moved to town and didn't have much of a garden and went to nursing school and met Mr. Moon and got married and had two more kids and got back into the gardening business and sometimes did a little preserving or pickling on the side but I've never filled up the kitchen the way I used to back when I was in my young twenties.
Which is fine. I am not a Mormon.
I am still a hippie though, in my own way.
Which is all to say that I did not make any pickles today.

I did do a lot of laundry and hung it on the line and finished Maggie's dress except for the buttons and buttonholes and also, I sort of want to do a little simple embroidery on it. I may not, though, as it is a summer dress and summer is only going to last for about another six months and if I start embroidering it might take longer than that.
I don't know.
I don't know shit.

I do know that I am making spaghetti for supper. Not pasta but spaghetti. The kind with hamburger and onions and garlic and peppers and tomatoes and sauce. Like your mama used to make but not really. If you are my age, you probably grew up eating your mama's spaghetti at least once a week and if your mama was like my mama, spaghetti may have been one of the best things she made. Every woman had her own spaghetti recipe and I believe they all included a pound of hamburger, a can of tomato sauce and a can of tomato paste. At that time, no one had thought to make spaghetti sauce and put it in jars although Hunts may have had a canned sauce. I don't know. My mother's spaghetti sauce was fairly exotic in that she put a drop of Tabasco sauce in it. Only the one drop because Tabasco was considered to be nuclear in its hotness. Two drops surely would have melted our tongues. That bottle of Tabasco was brown because it had been in the cabinet so long. One drop a week doesn't do much to use up even the tiny bottle of Tabasco which is what my mother's was. And of course, there was always the green can of Kraft Parmesan "cheese" on the table when spaghetti was served.
Well, that's a tale from long ago and I would be interested to hear how your mama made spaghetti. I even knew a woman who used a can of tomato soup in her sauce and I have to tell you, it wasn't bad sauce. Of course, I was about sixteen years old when I ate it so what did I know?
I didn't know anymore then than I do now which means I didn't know shit.

Well. Here's a picture of August that Jessie just sent me. 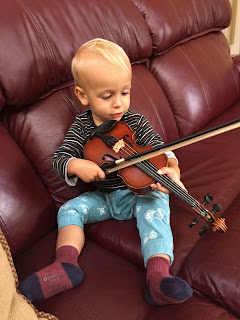 He is getting so big. He'll probably be playing Carnegie Hall by the end of the summer or maybe the Opry House in Nashville. Either one or both. He may also be potty trained but maybe not. We shall see.

Mick's out calling the girls to bed. A rooster's job is never done. Do you suppose that the derivation of the word "rooster" comes from the word "roost" and the male chicken's job of getting the hens to come in to it every night?
Golly. I can't believe I never thought of that.