It is quiet in Lloyd again, just the occasional car going by, the birds, the washing machine chugging its swishy rhythm.
The boys have gone home.
Owen slept until at least 9:30 this morning after having fallen asleep before one word of Mr. Peep and Gibson said, "No Mr. Peep. Tomorrow."
And then he fell asleep.
They were tired boys. With tired grandparents who fell asleep not soon after.

I made pancakes this morning and bacon too, of course. And when all of that was over they begged me to let them give me a makeover.

I did. They made me over to be the Queen of the Ocean. 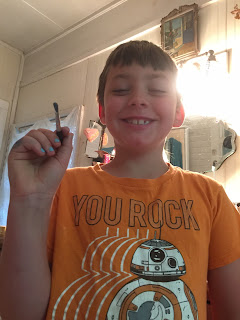 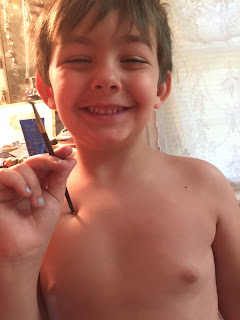 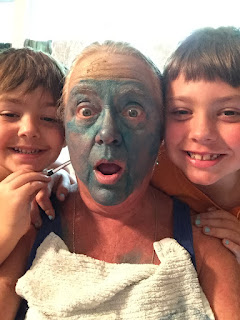 I have managed to wash most of it off.

We had such a good time.
Well, Gibson had a moment.
I found him lying on the Love Couch in the library, gazing up at his mother's beautiful high school portrait. He had a tiny tear in his eye.
"Gibson, do you miss your mommy?"
"Yes," he sniffed.
"Come have a piece of bacon," I said.
"Okay!" he said, and jumped off the couch and ran into the kitchen and all was well and he was merry again.

When Jason came to pick them up, he had Maggie with him dressed in the most darling seersucker sundress and she gave us all hugs and kisses and called out for "Owee!" and when I got up this morning Gibson greeted me with a giant hug and the words, "I love you!" and Owen let me rock him in the rocking chair where JUST YESTERDAY I held him as an infant and gave him his bottle. Now his legs are almost as long as mine, his feet reach to the floor, even when he's on my lap.
But he is in no way too heavy for me to hold.

They are the most loving children. And this is why. 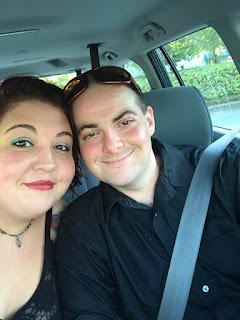 All right. Time for me to wipe my eyes and get on with the day. I think I better make some pickles.