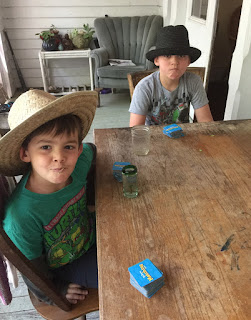 I didn't get squat done today and I really don't care. I felt fine and no excuse there, but those two Buckeroos in the picture above came over to hang out and that's where I put most of my attention. They named themselves Buckaroos, by the way, and Owen at least would not respond unless I called him "Sheriff." We played a rousing game of Matching and then a sort of slow and pitiful game of Battle.

Boppy had thought that he might take them either fishing or to a car museum today but that didn't end up happening. He started to work on what he thought would be a simple spigot repair and, well, he's still working on the thing which is now a project and we don't have water for the garden but we will. I have great faith in his fixing abilities, plus, he has a lot of serious looking tools and knows how to use them. But that wasn't the only thing he did. He and Owen also dug up some more potatoes. 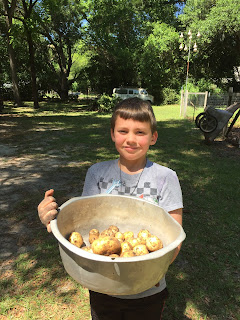 Owen washed them for me and did such a good job that I had to stop him and inform him that if you scrub all the skin off, the potatoes will rot.
He also helped me pick peas and for his efforts he got to take all we picked home, plus some potatoes. He does not personally like potatoes (how can you not like potatoes?) but he is learning that it feels good to take home vegetables to feed the family.

There was also a lot of eating. We started with the traditional pancakes and bacon. 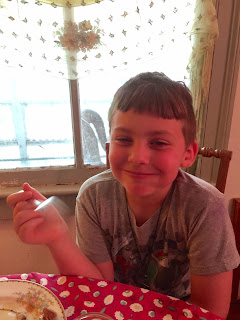 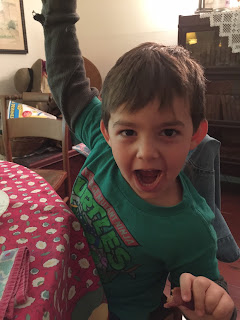 There was also cheese toast eating, Chex Mix eating, and purple cow slurping. Purple cows are (this is for you, Birdie) lime sherbet, a little bit of ginger ale, and grape juice. But you can make them with whatever sorts of sherbet and soda and juice you want. It's all a rip-off of what we call Methodist Punch, and it's delicious.
Not all of that eating happened at one time. It was sort of spaced throughout the afternoon. And at some point, Boppy got a tuna salad sandwich and a whole lot of peas were eaten as well. Sometimes I feel like I'm running the MerMer Short Order Cafe around here and I have no idea how Lily's going to keep up with those boys' appetites this summer.

Anyway, that's what happened here today. And Gibson made buildings and towns with blocks and Owen made a castle with a pile of glass blocks we've had outside (which Mr. Moon is going to do something with some day, I swear) and he was quite proud of his achievement. 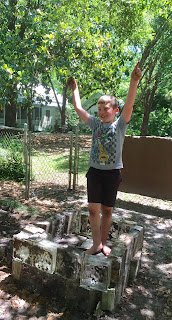 He and Boppy also took a break from their work and tried to make a fire using a magnifying glass. They got smoke but no fire but I'm pretty sure they had a good time, anyway.

Jessie and Vergil and August went to St. George Island today and although August is still a little sick and fussy, Jessie reports that he had a good time and that they got some of the best boiled peanuts ever. 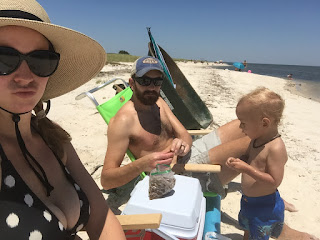 Looks like a good time to me. Jessie's been loving boiled peanuts since she was August's age and I still remember with huge fondness Glen's daddy saying that the best meal in the world was boiled peanuts and a Coors Lite on the way to the beach.
He may have been right.

I loved being with my boys today. We had some good chats and some good laughs and Owen and I high-fived when we discussed the fact that soon it'll be summer vacation from school and we can all go to Japanica! again. The boy may not like potatoes but he sure does like miso soup and sushi. And he knows where potatoes come from, even if he doesn't want to eat them, and he truly learned today how to pick peas using his thumbnail to spare the vine when you go for a pod. AND we found tiny green beans and I swear to you- they had grown dramatically from the time we first spied them this morning to when we went to check on them this afternoon again.
He may never be a gardener on his own, or he may be. Either way, that's all right, but if he does have the gene, he'll remember instinctually and viscerally a lot of what he's learning here in Lloyd.
That makes me happy.

Good Sunday to you. Let's check in tomorrow because Monday's are truly when we need the prayer services, don't you think?