From Sushi To Murder To Literary Works To The Giant Armadillo. Plus. Other Stuff.

This morning Lily asked me if I wanted to go with her to get a pedicure because she had a small window of opportunity with Jason home for the morning and of course I said, "Yes," because Lily never gets treats like that and she should have someone to go with her and besides, it's lovely to get a pedicure, especially with your daughter sitting beside you.
And so we did but we got a call that Owen had had a very short, very small seizure at school. Jason went and got him and reported that he was fine. It's been a long time since Owen's had a seizure and it does appear that the medication is helping tremendously. But he'd fallen and his best friend Chase got the teacher and there was no vomiting and like I said- it was extremely short. I cried a little bit but Lily said, "It's all right. He's fine," and I snuffed it up because I knew she was right.
I cry too damn much.

After our pedicures we went back to Lily's and got Magnolia and Owen and then we picked up Gibson and met May and Michael at Japanica! for our lunch. We hadn't gone there in forever because we don't like to go without Owen since it's his favorite restaurant and it just doesn't seem fair.
Here's what Gibson looked like, hugging his sister. 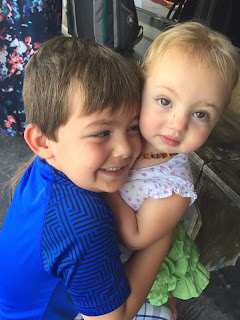 And here's what Owen and Magnolia looked like on the comfy couch. 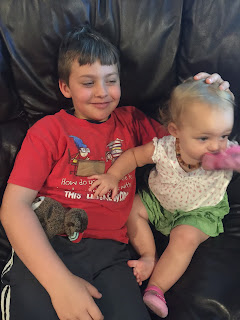 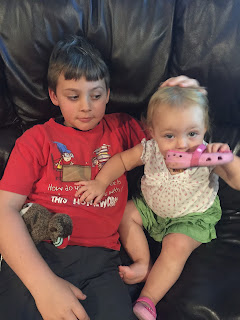 That little girl has no idea in this world that every little sister isn't loved and cuddled and carried and tickled and kissed and held almost every moment of every day.
And yes, she is chewing on her shoe.

So we ate our sushi and miso soup and salads with ginger dressing and green curry tofu and all of the deliciousness. We missed Hank but he'd had a jury duty summons and couldn't join us. It turned out that the trial was for a murder case and they kept him for a long time although they didn't even ask one question of him. He's so glad he doesn't have to serve because it was a horrible and grisly murder.
For some reason, it's never truly occurred to me how deeply jury duty could affect someone. I mean- sure, of course, but not really. To have to see all of the pictures, to have to listen to all of the testimony, to have to watch the families of the victim and of the suspect. Their tears, their reactions, their so separate and yet now eternally-bound grief...
Well.
I'm glad Hank didn't have to go through that as well.

May and I talked about books and she and Michael gave me a gorgeous Talavera sun and moon wall decoration. 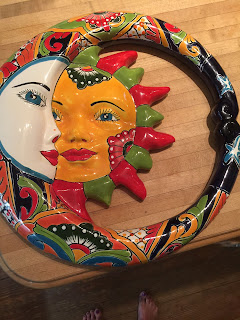 Look at those pretty faces! I'm not sure where I'm going to hang it yet but I may hang it right here beside me on the porch where I sit to write. Where I watch the birds and observe my chickens and I can see the squirrels skittering up the trees and running across branches in games of tag and of love. What a sweet present! May knows her mama so well.

We went to Big Lots and the boys were wild. Owen is often on Full Tilt after a seizure and today was no exception. They were like puppies tumbling and jumping and running and nipping and after we left the store, we walked down to the Goodwill Bookstore and there was more of the same. I had promised to get Owen a journal and so I did, along with their books, and on the way back to Lily's house, Owen borrowed a pen to begin to write in his journal.
"How do you spell brother?" he asked.
Lily told him.
"How do you spell hate?" he asked next.
Lily and I cracked up.
By the time we'd gotten to their house, he had written three separate stories, one about his brother, one about his mother, and one about me. Here is the one he wrote about me. He gave it to me to keep. 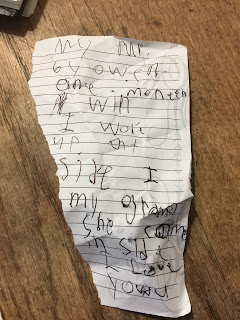 "My Mer by Owen. One morning when I woke up outside I saw my grandmother. She came inside. I love you."

Well, that's just about my favorite story ever written in this world. And I will keep it forever.

So that was my day and I also pulled the pea vines and a few more collards and cleaned out the hen house and did some laundry and have bread just about ready to go in the oven. I'm going to make a crab and corn chowder and a salad. Every time I pick any of the very, very last lettuces and arugula, I get a little sad. I don't know how in hell I'm going to survive without the beautiful salads I've been making since last fall. Just the smell of arugula still makes me swoon. Familiarity has not bred contempt in the least.

One more thing- I had given up having hope that my Roseland mango had survived the winter and have been kicking myself for months for not bringing it in despite the mild winter we had. I covered it, but every leaf died and I cut it back and continued to water it but it was showing absolutely no signs of life until today.
And look- 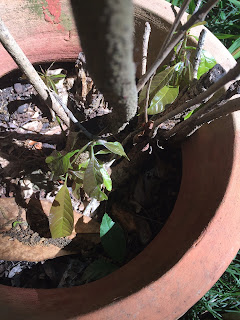 That may look like nothing more than a sad, raggedy mess to you but to me, it looks like rewarded hope and memory made visible. That mango was grown from a fruit I took from underneath a tree that I ate the mangoes from when I was a child. That was so long ago that I and my other fellow feral child friends from the community had to rassle with the giant sloths, saber tooted tigers and armadillos the size of Volkswagens for the tart, sweet, turpentine-y fruit of that tree.

I swear to god.