It's The Emo Virus 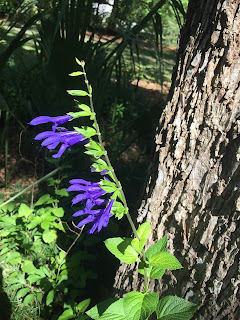 I knew I was not feeling well last night when I couldn't even finish one martini.
Nor my entire artichoke. And the food on the episode of the British Bake-Off we were watching made me feel slightly queasy, just looking at it.
Sigh...
Whatever August and Magnolia have had recently has caused them to be so unhappy and tearful and wanting their mommies and I'm pretty sure that I have a touch of the same thing because this morning after I made Mr. Moon a nice egg sandwich and it slid off the plate as I was handing it to him and it landed all in pieces in the dishwasher, I cried a little.
I don't want my mommy but a gentle hug sure would be nice. And I wouldn't mind it if someone came along and patted me on the shoulder and said, "There, there," and led me to the bed and tucked me in and gave me a cool kiss on the forehead.
Instead, Maurice just attacked my hands. I guess she's just being nurturing in the only way she knows.

It's so cool and so beautiful and the light is so perfect this morning. Here are some of the young chickens. 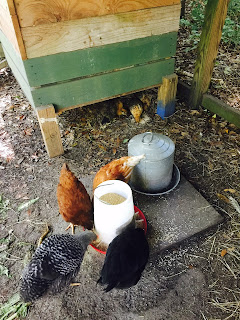 Aren't they getting big? If you look closely under the edge of that little box nest, you can see the four Ace Hardware babies. They're getting big too and still are as shy as they can be.

All I really wanted to do this weekend was to pull the kale, and weed and maybe get rid of some of the collards and perhaps plant a few more zipper peas while it's so nice and cool and I'm going to try to do a little of that but I know that when I go to pulling that kale and those collards whose stalks are bigger around than a super model's thigh I'll probably end up whimpering.
We'll see.

Meanwhile, I can't imagine a more beautiful day to sit and do nothing if that's what it all comes down to. I would happily sit on the porch swing, rocking and weeping gently, whether for the gorgeousness or the virus, not caring either way.