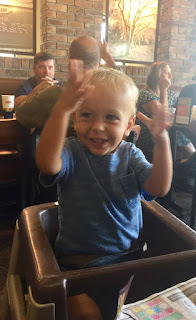 Mr. Moon and I stopped in town on our way to the beach to have lunch with this guy. We let his parents come along.
That's a joke because we wanted to see them too. So much.
By the time we get back on Sunday, they'll be headed up to Asheville and I had the hardest time letting go of that boy. I mean literally. From the time we got to the restaurant to the time we left. I did not want him out of my arms.
The fact that half the time I was crying did not bother him one bit. He was in the goofiest, happiest mood, eating everything he could get his hands on, laughing at his Boppy and his mama and his daddy.
But finally Jessie drove away with him in the back seat, waving his hands and me waving my hands, my face crumpled in crying
.
"It's okay," I told Mr. Moon. "It's all fine. This is just how I am."
And it was and it is.

We drove through Crawfordville and Panacea and Carabelle and Eastpoint and finally crossed the bridge to St. George Island and here we are in the old Simmons which is as comfortable and cozy as you could wish. We can't figure a damn thing out concerning the remote operation but that's okay. Mr. Moon has already done a little fishing 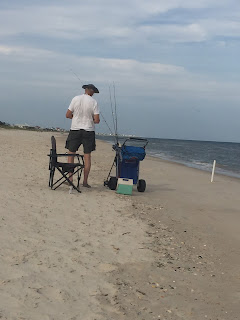 although he only caught one tiny whiting and gave it back to the Gulf to get a little more size on him.
I went into the water and it was a bit chilly for this Southern gal but by tomorrow when it heats up during the day, I'll enjoy it tremendously.

We stopped in Panacea and bought shrimp and blue crab claw meat and we went to the St. George Piggly Wiggly Express when we got here and tonight's menu is going to be garden greens salad and cheese grits and shrimp. They had the real grits at the Pig which take an hour to cook and I have some of those simmering now. I'm always amazed at the choices in the Piggly Wiggly, the amount of Bob's Mills products, the generous number of choices of pickled green beans, the hummus, the suntan lotion and craft beer and frozen pizzas and beautiful cuts of meat and some decent produce, including great bunches of fresh-looking cilantro.
Plus, of course, there's a bait refrigerator.

And so it goes. I've seen seagulls and osprey and pelicans. I've come back to the island where I spent three summers with my children in a cement block apartment, two rooms big which we made into a magical and wonderful place to be with fairy lights and a futon and books and dolphin sightings and walks to the store for ice cream and yes, a TV that had many reruns of the Brady Bunch.

I should be walking on the beach right now. I just can't. My body and soul aren't there yet.
Tomorrow.

Anyway, here we are and I am glad.