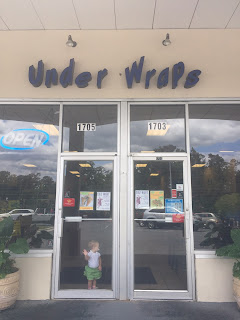 We went to a different place for lunch today, "we" being Boppa and Hank and Lily and Maggie and Gibson and me. August has a little virus and so Jessie kept him separate from the other children and Rachel had to work and of course May was at work so it was just the six of us.
Under Wraps is a new little place that serves Mediterranean food as well as wraps and salads and Hank does trivia there on Mondays. 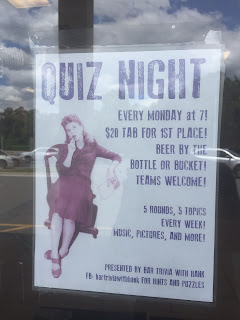 The food was delicious and very reasonable. Lily and I both got the falafel platter which came with falafel, of course, and pita bread and hummus and tabouli and fantastic tzatziki and Mr. Moon got a gyro and Hank got a chicken pita and we got some extra grape leaves and Gibson got a corn dog and french fries which he declared to be very, very good and he also tried grape leaves and liked them very much.

So that was fun as it could be but the very best part of the day in my opinion was Gibson making me laugh in the car and I can't even remember what he said for the most part but I do know that at one point I thought perhaps I was hysterical and that someone needed to slap me but not really. I do recall him saying that the only four things that are brown are poop, coffee, crayons, and...something else I don't remember. Lily and I pointed out many other things which are brown and I said, "Do you know what the prettiest brown thing is?"
And he said, "No," and I said, "Your eyes," and he said, "I know."

Maggie was her darling self, all dressed up in a green cha-cha skirt, giving hugs and kisses as she does. And here's a picture of her that Lily sent me yesterday. 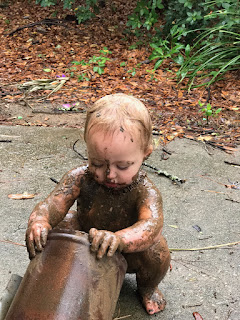 Speaking of things which are brown.
There was mud play yesterday at the Hartmann residence. I think that perhaps the boys painted their sister with it.

Anyway, that was all great fun and left my soul feeling plum-damn light and airy.

I was going to write about something that had absolutely nothing to do with lunch but I can't, for the life of me, remember what it was. But that's okay and it's Friday evening and Mr. Moon just shook up martinis and the church next door is vibrating with the drums and the singing and I'm watching my chickens as I do every evening from the back porch as they race around to get their last bits of scratch for the day, talking about it all with chirps and whistles, and the magnolias are blooming and Joan Didion may have been right in that there is a darkness to the south, things here are in an eternal state of decomposition, but she completely missed the mysterious dappled loveliness it can hold, the joy of words and music and flowers and towering, sheltering trees which can only arise from the fertile, hot, wet atmosphere, born of that very same decomposition she shuddered at.

I suppose the south is an acquired taste and I have certainly acquired it. It makes my mouth water.
Speaking of, Mr. Moon just came in from checking out the potato situation in the garden. 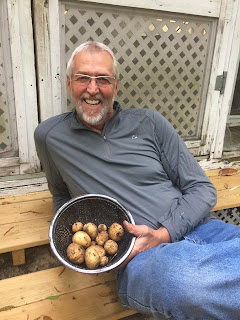