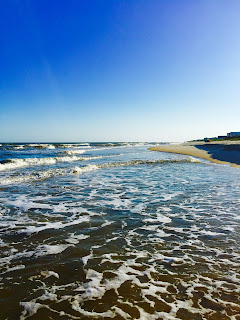 Mr. Moon and I played a little late afternoon cards and then we took a walk on the beach. Just a little walk. For me, once I get started walking on the beach, if the sand is nice and packed and the temperature is good, I get into a Zen-like thing and feel as if I could walk for days. And of course, it's so hard to judge distance on the beach. A lighthouse that looks like it's just a few hundred yards down the beach could actually be two miles away and you have to take all of that into consideration.
It's a kind of magic which I am sure science can explain but I just accept that I'm going to walk farther than I thought I would and I'll probably have sand blisters on my toes when I get back.

But. That's one of the things I love about the beach. The organic meditation of one foot in front of the other on the long sand road bordered by water which is as alive as anything on this earth.
Also- little sand pipers, scurrying in front of you as you walk, seagulls and pelicans above you, guarding, gliding, falling into great dives to catch fish in that living water.

As hard as I try, I can't get a good picture of the pelicans. I see them coming in long formations, I grab my phone and click the camera app and aim and shoot and I get stuff like this. 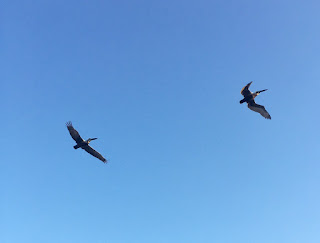 Suck. They are the living pterodactyls, they are magnificent, and I love them. 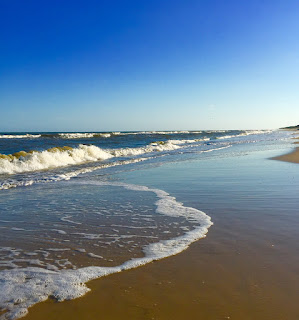 I am going to go heat up some crab cakes leftover from last night and make more cocktail sauce for the fat, sweet shrimp I boiled two nights ago. We had lunch today at the restaurant where the one and only server, a woman older than I am I believe whose name is Barbara, says things like, "I know they want their soup. I don't give a shit."
But then turns around and calls everyone "baby" and "sugar" and gets the soup to the table as if she did care. I honestly can't figure out which attitude is true and which is not.
I do know that the owner who was shucking oysters said, "I wouldn't give two dollars for a dozen of these oysters."
Hey. The month doesn't have an R in it. It may be legal to harvest and serve them, but it don't make it right.
When we left, Barbara said, "Happy Mother's Day. I hope you have a good one."
"You too," I told her.
"Oh. I will. I plan to just lay on the couch and relax."
Trust me. She deserves it.