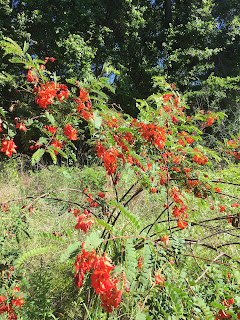 So I went to town today and decided to go to Joanne's Fabric and Everything Else In The World Especially Stuff That Smells Artificial to see if I could find a pattern and some material to make Ms. Maggie a dress which is ridiculous because you can buy a perfectly lovely baby dress for about a third of what a pattern and fabric and thread and buttons and okay, rick rack (I love rick rack) cost, especially if you go to the kid consignment shop but whatever. I like to sew.
Fabric stores sure ain't what they used to be and the mess in the pattern drawers upsets me terribly. I remember opening those huge metal cabinets, the way they rolled out so nicely, the patterns all arranged by their numbers so carefully. Simplicity here, McCalls here, Vogue here.
Now you're lucky if the number you're looking for is there and all of the divider labels look as if they've been bent and handled for at least five years apiece instead of being all crisp and lovely.
But hey- times change and who sews anyway?
Well, someone does because the fabric cutters seem to always be busy.

When I got in line to pay, the woman who was at the register before me was talking to the cashier. They were discussing some place that sold fabric where the clerks acted like they were doing you a major and stinky favor if they waited on you and so when I got up to the register I said, "So where were y'all talking about with such lousy service?"
(Yes. This is how I talk.)
"Hobby Lobby," said the cashier.
"Oh," I said. "Well, I never go there. They're too eat up with" (and here I wanted to say Jesus or religion) but instead said, "No birth control."
The cashier said, "I know!" and the women behind me in line said, "I wouldn't go there if you paid me for that very reason."
I had noticed this woman while we were waiting. She was probably about my age and was wearing a skull ring like Keith Richards' and a bracelet with skulls on it and I was going to say something about them but I did not. And she didn't look like someone who would wear a big old silver skull ring either. She looked like someone's grandma.
Anyway, it was a fine bonding moment at the Joanne's between two old liberal grandmas and I enjoyed it.

I have some very sad chicken news. Last night two of the Ace Hardware babies got snatched before we closed up the hen house. One of them being Little Bear. Mr. Moon came in from putting the chickens to bed and stuck his head in the door and said, "Not good," and told me the news.
We both feel terrible.
The two remaining chicks have stayed in the coop all day long.
Fuck. Just...fuck, you know?
I went out and gave them some grapes and they did eat them so they are not stunned into starvation.
Miss Trixie seems to be mourning the loss of Miss Butterscotch who was her oldest and closest friend. Chickens do mourn, I swear. She hasn't moved much past the coop or the hen house recently either and when she does, she seems to come and rest by that pottery hen I have on the kitchen porch with succulents in it. I know that sounds crazy, but Mr. Moon noticed it too.

And so it goes in the chicken world at my house. From twenty-one birds we're down to eighteen, and that's the way of it.

In other news, non-chicken related, this happened today: 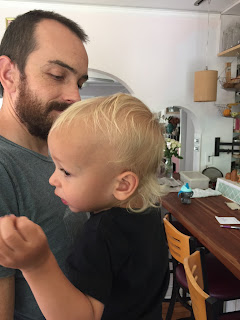 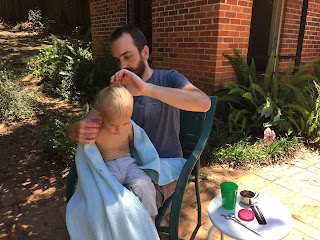 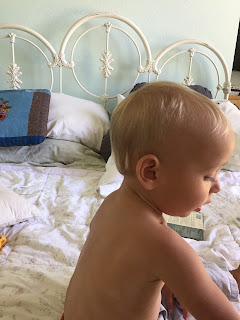 Jessie decided that it was time to cut August's curls and his papa did the job.
After Jessie texted me these pictures, I texted back that I felt stabbed in the heart but realized immediately that this was the wrong response. August is her baby, her son, and his hair was a bit mullet-y. And he is gorgeous and adorable, with or without his curls. I'm sure he doesn't care one bit. He probably enjoyed getting his hair cut. He's like that. Jess says that even if he's getting blood drawn, or a shot, he doesn't fuss because he's just so interested in what's going on.
Our little engineer/scientist. I think he's a lot like his daddy and I see Jessie in him too. She was always a very pragmatic child for the most part, taking things as they came, working through the hard things with a quiet strength she still has.
Which she most definitely did not get from HER mother.

Speaking of which, Mr. Moon is back outside, working on that plumbing issue.
He'll figure it out.
He always does.