Laugh All You Can 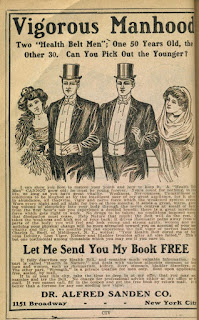 This cracked me up so much. The image came from the website of MessyNessy Chic which is generally filled with all sorts of interesting things from all over the world and today's post was entitled "Radioactive Jockstraps and Other Lethal Cures to Improve One's Sex Life."
Can YOU tell which man is the younger?
And we can laugh all we want at the very idea of someone ingesting radioactive-infused water or wearing radioactive or electronic medical devices (or, in some cases sticking radioactive suppositories up their bums) to cure what we so lovingly call "ED" but just ask Elizabeth how very, very helpful and side-effect-free the drugs which have been prescribed for her daughter's epilepsy have been.
Doesn't seem so funny now, does it?

Anyway, that's not what I came here to talk about. I came here to talk about the day I had with my daughters and August in Thomasville, Georgia, which is a lovely old town a few miles up the highway from where we live. Thomasville is often described as a place where there is a lot of money and honey, it shows. I described it today as looking like a place where a great many of the population look like they could be either presidential candidates or else related to a presidential candidate.
And they have great shops!
Okay. So mostly what we bought came from the Goodwill (which is a really nice Goodwill, as you can imagine) but we did buy the boys a few things at a place downtown called Firefly which is one of those places where you just want one of everything, thank you, yes, I'd love to have that gift-wrapped.
I'd take one of those necklaces and one of those candles and one of those little hedgehogs so cleverly crafted in a little woodland blanket and one of those bars of soap and one of those leather bags (okay, I'll take two of those) and that silk scarf painted with magnolia flowers and some of those adorable cards and of course a pair of those beribboned calf-skin booties for the baby. 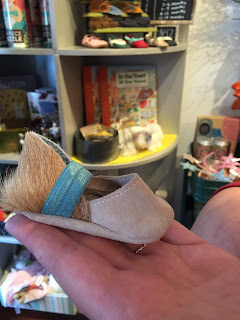 Please, yes, on the white cotton nightgown and also the tiny mouse house with all the little felt mice to go with it and that Mexican tin nativity which folds up like a laptop and the crocheted mama monkey with the crocheted baby monkey on her back and the two-hundred dollar salad servers? Of course! Must have! And hey- throw in half a dozen of those tin pirana toys that you wind up. Because everyone will want a wind-up tin pirana!
Hell, I'd even take one of their seasonal decorations (not for sale) made of cotton bolls and magnolia leaves. What could possibly be more southern than that? 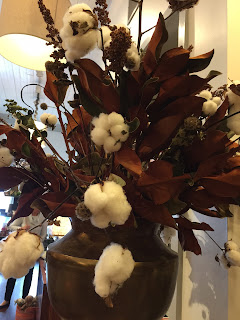 We walked around, oohing-and-ahhing and saying, "Look at this! Did you see this? Smell this." Etc.

But of course the most important thing we did today was eat lunch.
We were all starving for some reason and it appeared as if everyone in Thomasville was also starving (and hey- a lot of the women who live there look like they might actually be starving but that's another topic) and we went to one restaurant which had a line and passed that up to go to an old favorite called George and Louie's where we stood in another line to order where we salivated reading and rereading the menu. We got Greek salads and grilled shrimps and salmon and fried green tomatoes and fried onion rings and one of us got the Big Louie burger and the rest of us helped her eat it. 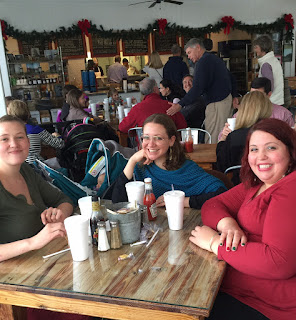 (See what I mean about the presidential candidate thing?)

And August was the best boy! He never once fussed. He rode around in his little seat in his stroller as if he were the king of the universe and got nursed and changed when he needed those things and he laughed and talked and even sang. He looks a little solemn here but trust me- he was happy. 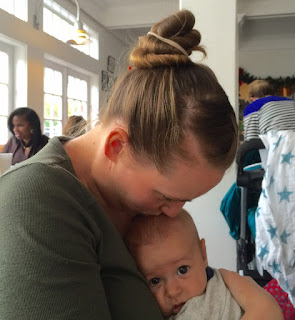 I was devastated to find that one of my favorite places in town is closed. A jewelry store which had been in business at the same location since before the Civil War. Oh, darlings! The lusting I have done in that place! I used to go in there and drool over the estate jewelry, wondering just how many times those very same pieces had been sold and bought and resold and bought in the same store. I actually have a tiny gold band with teeny diamonds in it that Mr. Moon bought me for an anniversary there.
But. BUT. It's been turned into a shop that sells the most exquisite clothes. A lot of Johnny Was whom I love and hate because his things are so expensive. Silks and velvets done simply and gorgeously and tastefully and drapefully and just...fucking perfect.

No. We didn't buy anything there but I did give them my blessing when we left which I'm sure they appreciated beyond belief.

We would have shopped more but Lily had to be back to go into work and so it was a short and sweet visit and I lied about lunch being the best thing. The best thing was laughing. No one in this world can make me laugh like my kids. Except for maybe Billy but he's like my kid too.
My first big laugh came before we even got through Monticello. Lily was talking about the food she's going to make for her Christmas Eve party. She said that she was thinking about making some Jello Jigglers because the boys would like doing that.
"Are you going to put alcohol in them?" asked Jessie.
"No!" said Lily. "I'm not paying for y'all to get drunk on my Jello."
"May," I said. "Write that down."

I wish I remembered everything that made me laugh but of course I don't. Well, some things I remember but I don't think I'll repeat them here. As I have said before, there is nothing like having grown daughters to joke with, especially daughters who have great earthy, womanly senses of humor. I will tell you another thing Lily said which was that Owen came into the living room a few nights ago to find her and Jason...
eating ice cream out of separate containers.
"What is this?" Owen asked. "A date?"
"Yes," his father said. "Yes it is."

We had such a good time on a gray chilly day and we resolved that we need to do this more often. It's good for all of us and if all we do is laugh and get lunch, our job is done, our lives are better.

And now I'm home in Lloyd and it's so very quiet and Mr. Moon has gone to auction. My hips have been screaming today, whether from the weather or from yesterday's leisurely yard work, I do not know. But I will be so happy to lay down in my bed and read in a few hours.

It is supposed to begin raining tonight and will rain all day tomorrow. We shall see how well the "drying-in" works and the tarps will hopefully prove their worth.

It is, I think, the longest night of the year and tomorrow is the solstice. I feel the subtlest sense of lightening in my own soul and that may be entirely imaginary or it may not.
Who knows?
Not me.

I think I'll go eat some leftover meatloaf and mustard, kale and collard greens.
Life is good. For some moments at least. And when it is, it is best to pay attention.