Some people are just so damn entwined in your life that you can't pick their colors out of the fabric if you had to. Impossible. And it's not just them, it's their mamas, their brothers, their step-brothers and step-sisters, their daddies and step-daddies and so on and on and on, all twisted up together and if you DID manage to pick their colors out, the entire cloth of your life would be destroyed.
You simply would not be who you are or where you are and that is the simple truth.
And when a person like this, whom you have maybe (definitely) known for oh, say forty-five damn years, comes to visit you, even if you haven't seen them in 12 years or so, you can still put your foot in their lap and get a foot massage. 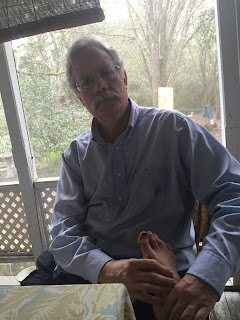 That's what this man is in my life. David.
This morning I drove even farther out in the boonies where David's mama and her husband live to pick him up along with his newly adopted son, Darius, to bring them home to make pancakes for their breakfast. I had never met Darius and was excited to see this young man whom David has taken as his son, who indeed, calls David Dad, and who says he never had a daddy until David came along.
A bit unorthodox but trust me- there is nothing about David which has ever been orthodox in the least and that is just the way it is.

What a wonderful day. I fell in love with Darius immediately. 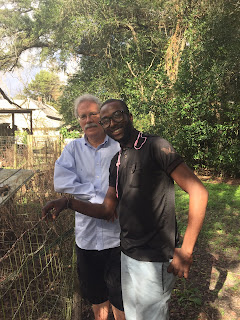 Is he darling or what?

We ate pancakes and bacon and sausage. We sat on the porch and talked and talked and talked. We fed the chickens scraps of leftover pancakes and walked around the property and Darius was taking pictures of everything. The goats next door enchanted him. "I want a goat!" he kept saying. He loved the old oaks, the honey tree, the camellias. He munched raw mustard and arugula and kale from the garden and made David taste it all too. When Darius was an eighth grade science teacher, he had his students make a garden so he knows far more about those things than David does. They both live in Atlanta and live a far more city-life than I do. David was not that impressed but Darius seemed to love it all. When I told him that this house is my dream house, he said, "This is what my dream house looks like too."
So you know I love him.
After the yard ramble, we talked some more. Darius knows far more about his father's past than he did before today. Let me just say that David and I, along with our friends back in high school, did some pretty outrageous stuff and it is a bit of a miracle that neither one of us ended up in either prison or just plain dead.
But here we are. David teaches at a historically black university in Atlanta. He has a PhD. I am a grandmother.
And oh, how we laughed and laughed, the stories pouring out of us and Darius told us some of his stories and showed me pictures of his beautiful little daughter.
I mean- who could ask for a better day than that? I kept tearing up and telling David I love him. He is a rather brusque man and his emotions are not as close to the surface as mine but he didn't mind. And I know he loves me too.
And he rubbed my feet.

When I took them home, I visited some with David's mama whom I have known as long as I've known David and with his step-daddy too whom I have known possibly longer than either David or his mother because he was my eye-doctor, back in Winter Haven. He is also the father of another very close friend of mine from another marriage.
The twining. The braiding. The history.
David's mama is an incredibly beautiful woman who seems to be simply ageless. And she is so sweet. She said, "You can't be a grandmother. You are still our little Mary Miller."
Oh Lord, y'all.
And her husband, Dr. D., might be in his nineties. I don't know. But he is still a damn good-looking man and now he manages thousands of acres here in North Florida and keeps cows.

So. That's what I did today and I didn't wash the breakfast dishes until almost six o'clock this evening and guess what? The world did not come to an end.

I have begged David and Darius to come back and stay with us. I want to take them down the river in Mr. Moon's boat and drink beer and eat shrimp and oysters. I want to drive them around to see the little towns and let them meet (or in David's case, re-meet) my children. And my grandchildren.
I want to laugh some more with them.
Darius has told me that they will.

I am trusting in that.

And if all of that wasn't good enough, I saw the biggest pig I've ever seen in my life today when I was on my way to pick up the fellows. That pig was as big as any cow I've ever seen.

Plus- we're having pizza tonight. That I am making.

I hope yours was a good one too.