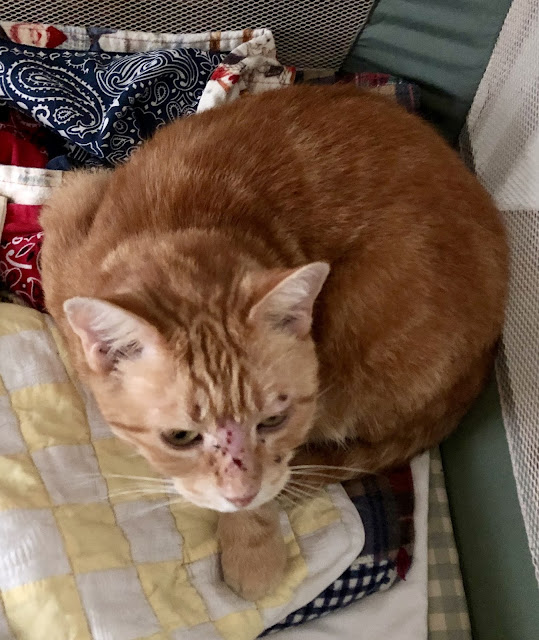 That is what Maurice looked like yesterday. She was napping in the Pac 'n' Play that I still have up in the guest bedroom for Levon, although he's never yet spent the night and will soon be too big for it. But I suppose that Maurice felt safe it it. Jack rarely goes into that part of the house and she's somewhat hidden from view. Poor baby. Her face still looks rough. And I heard her and Jack have another spat yesterday. This is an eternal feud. Hate without end, amen. Amen.

Did you ever have a friend to whom you were so close that you were practically inseparable? That you loved so much that it was just this side of inappropriate? Who carried you on her back during the hardest times and you did the same for her? Whom you talked to endlessly on the phone and whose voice never failed to make you happy? Whom you told EVERYTHING to? Who knew you better than any other human on earth and vice versa?
And then, over the years- something happened. Could have been anything. A disagreement or more likely a slow change in one or both of you and resentments and bitterness began to creep in and add up. Whether you or she changed or both of you changed or whether you started to realize that certain things about her drove you crazy, things that had always been there but that you had been blinded to or chose not to notice, it all started to tip the scales to the point where the friendship was unstable and then untenable.
This has happened to me several times. And it's always heartbreaking, although always a little different. For me, the relationship I was in with a friend whom I never thought I would not love and want to talk to every day slipped cog after cog until eventually the mechanism simply did not work anymore. The chemistry was gone, disappeared. Because there is chemistry in these friendships whether same sex or not. There simply has to be to form this sort of bond in which there is a closeness that for a time, at least, is unbreakable. In this case, it suddenly seemed to me that my friend was going crazy. She had huge problems with other people and would complain endlessly about them but I could never get her to tell me exactly what she was so angry about, just that she was. So, so angry. Her habit of going on and on and on about how much she loved a family member drove me crazy. She was often unkind, although I don't think she meant to be, it's just that she was not very sensitive to others' feelings.
Over the years it occurred to me that she is probably a narcissist. Everything, in the end, was about her. And whatever slights she perceived from others were not forgiven. Ever.
We tried, a couple of times over the years to meet up, to catch up, and there was always a deep element of anticipation to that for me. I missed her terribly. Or at least I missed the part of her that I loved for so long. Because parts of her were beautiful in every way.
But after an hour or so, I would realize that no, nothing had really changed. It was still all about her, mostly. And the things that had annoyed me to the point of not wanting to see her, talk to her, were still very much a part of her.

I dreamed about this woman last night. I do dream of her occasionally but this dream was quite vivid and we were reconnecting in some ways. I suppose I miss and need companionship now more than ever and in my deepest heart I miss that connection I had with her which was so special and so pure for so long. All day I've been thinking of her and when I went to town to do my shopping, I decided to actually go by Joann's Fabrics. The route there took me through my old neighborhood. The one I'd mostly lived in when this woman and I were such close friends. She lived less than a mile away in a house I am almost certain she still lives in. I drove by my old house and was hit hard with memories of the times when I lived there. I was in nursing school, a single mama, struggling with all my might to keep my life together, going through a depression and a divorce. I don't know how I did it and I will tell you right now that I never could have without this friend's help. It was also the place I was living when I met Mr. Moon. The place I was living when my darling Sue and I were such good friends. The place where my nursing school friends would all gather to study together, drink coffee together, get ready to go out to dance together. Where Hank and May lived as little ones, where I felt that I was failing them in every way, almost every day. The place where Lily was born.
I stopped in front of the house for a moment to take in the changes. It's still a small but very handsome house. Glen and his daddy turned a screened side-porch into a huge master bedroom and bathroom before we were even married. That's the room Lily was born in. My friend was there when Lily was born but I can remember even then feeling uncomfortable with her.
I could have closed my eyes and driven to her house by muscle memory alone. But I didn't want to drive past her house, much less stop and visit. There is too much water under that bridge.

I went on to Joann's where I spent a relatively fruitless (but expensive) forty-five minutes. I did not find the quilt flannel I wanted but did buy a few yards of unprinted solid-colored flannel and a few yards of cotton to make more masks with if I want although I don't know why I would. Masks are a dime a dozen these days, almost literally. It was so odd being out. That might have been my first shopping excursion besides Publix and Costco since last March. I kept feeling like I would run into my old friend. I think she works in that neighborhood.
I didn't.
I went on to Publix and Costco and not only pandemic shopped but hurricane-shopped too. There is a category 4 storm named Delta about to slam into the Yucatan tonight and then it will head north, of course. 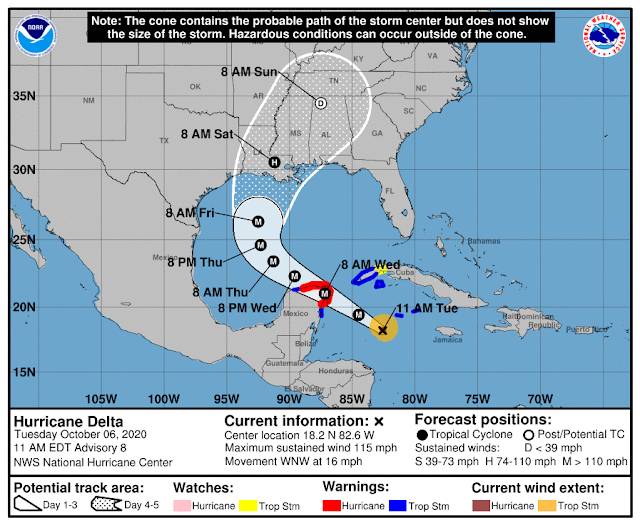 It's "supposed" to hit west of here but of course one never knows and it is definitely going to hit Cozumel which is right off the coast where that red part of the map is. I've been thinking about that all day too. As if those people haven't been through enough recently with the pandemic and very, very limited tourism and no cruise ships. I know it's crazy but my heart will always be there in those jungles, in that water of seven colors, with those people who smile so beautifully and love their children so dearly.
Emotional day. But I got out of the house! I did that. I have enough supplies to last through a hurricane should Delta change her mind, her track, her course. Enough for maybe one one hundredth of a pandemic.
I don't have an ending. I guess if I did, it would just be to say that I honor the love and friendship that I had for my friend and also honor the grief that I will always hold for what was and what can never be again.
This is life. We are humans. We fall in love, we fall out of love, we hold on tight to that which is real and learn to let go of that which is not.
Or something like that.
Love...Ms. Moon
Posted by Ms. Moon at 6:31 PM