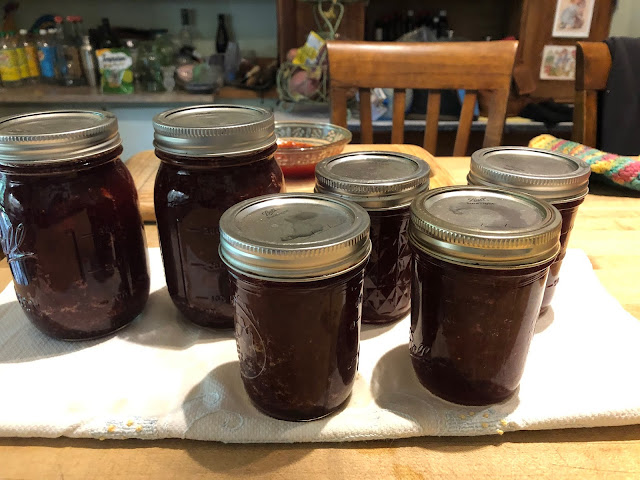 I spent a good part of the day wondering if I was having a stroke, knowing that I wasn't, but was merely instead anxious as hell.
There is no "merely" about anxiety.

Before I went to sleep last night, not even knowing that Trump was infected, I started wondering what in hell would happen if he did get the virus and died before the election. I knew he'd been exposed to Hope Hicks and who knows who all else and although I will admit that for four years the idea of him dying did not exactly upset me, to put it nicely, it occurred to me that his death now would throw yet another complication out there to any sort of honest election and although it WOULD mean that he wouldn't be president again, how would it affect everything? Would the RNC have to choose another candidate? And how would that work? So every time I woke up in the night I fretted over this possibility because fretting and worrying are what I do best. It all resulted in me having another one of my museum-house dreams in which there were many, many bedrooms and bathrooms all completely filled with dirty bedding and towels and other assorted left-behind laundry that needed to be done.
Have I moved on from the filthy kitchen? Is this progress?
There were a great many guests in the house and more to come. I was frantically trying to create some order, which was a Sisyphean task so daunting that I was grateful to wake up and realize I'd only been dreaming and then the next thing I knew, I was reading that Trump had indeed tested positive for covid.

And now I have just heard that he's being flown to Walter Reed.
Ooh boy.

As I wrote to a friend of mine today, if there is one thing that Donald Trump is really, truly good at it is FUCKING THINGS UP!

Do we even need to mention how truly ironic it is that the man has the virus? Or how predictable that he would get it?
I think not. Some things are, as the Declaration of Independence says,  self-evident.

Rachel sent a group text with a link to an election law blog about how the situation would be handled should DT succumb to the Chinese Hoax Virus. I didn't really understand it all and didn't really try but there are answers. HERE is the link if you care to read it. I would advise having  more than one-half cup of coffee before you do.

So yes- anxiety and I had no motivation to do anything but crossword puzzles and getting the sheets on the line. So I did those things. And then I decided that trying to make jam wouldn't be too stressful but might actually be therapeutic so I did that. I used the frozen strawberries along with some frozen Roseland mango puree and I cooked those down and down and down with sugar and lemon juice and that was all until it was of the right consistency and filled up my sterile jars and processed them in the canning kettle. I am quite pleased with the consistency and the flavor. I used the new large Dutch oven and it worked beautifully. At this point, I am very glad I bought those pots. It's nice to cook in a white-coated pot because it's so much easier to see what you're cooking. Does this make sense? It does to me. And the jam-making did alleviate my anxiety and made me feel as if I had accomplished something, at least.

I realize that anything I do which gives me the slightest illusion of control is good thing to do and honestly, I need to remind myself of this frequently while knowing all along that it is all illusion but if it makes me feel better, then who cares?

Here's a picture of Owen and one of the new rats his mama drove all the way to Jacksonville to a qualified breeder to get. 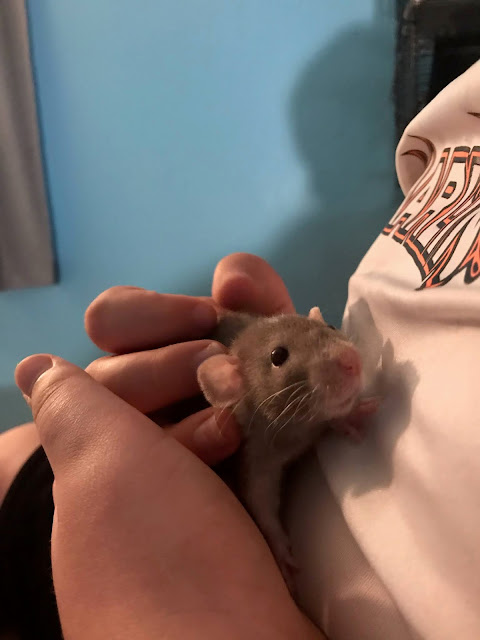 This batch o' rats appears to be healthy and hearty. Lily said that when she took this, Owen was saying, "Dang girl! You got some big ears!" I think it's awesome that the kids have these little pets to take care of and tame and love on. I wish them long lives.
And that's it. I mean, I could go on for days about Trump having covid but what's the point? If the past year has shown me anything, it's that I can't begin to predict what in hell is going to happen next and I don't even want to try. One thing I have learned is that it is not in the least helpful to say, "It can't get any worse."
Oh baby. Hold my beer.
I am going to go tell Mr. Moon that it's time for him to make me a martini. It is Friday, right? I think so. Time has lost all meaning. It was two o'clock this afternoon before I realized I hadn't eaten lunch. I was astonished when I saw what time it was, truly thinking it was around 12:30.
So. On we go.
Happy Friday, y'all.
Love...Ms. Moon
P.S. Please, please, PLEASE do not let Joe Biden get covid. Jesus take the wheel and protect him from the vile, germ-ridden spittle that flew from Trump's mouth on Tuesday night.
Just saying.