A Boy And His Dog, A Woman And Her Skillets 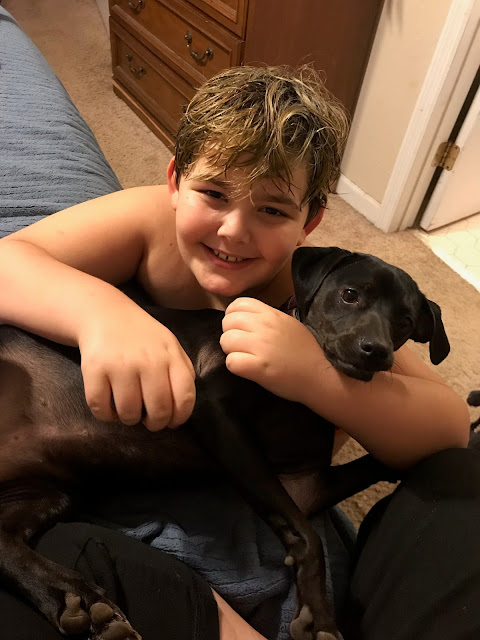 There's a nice picture of our gorgeous Gibson with Pepper that Lily sent on our text-family posts. I can't believe how grown-up Gibson is becoming. Pepper, on the other hand, is as big as she's going to get. She's a spritely little doggo and I hear that when she's not surrounded by people and chickens she can do quite a few tricks. You can tell she's smart just by looking at her. Or perhaps I just feel that way because I think she's smart and so there you go... 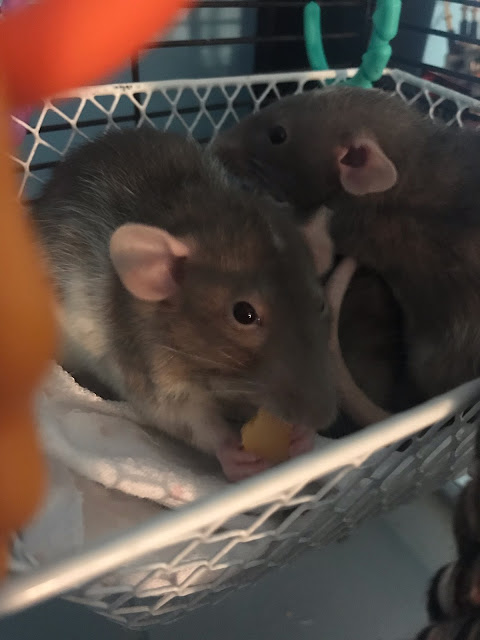 Don't ask me their names. I don't know them. But the text that came with the image said, "Did y'all know that rats really do love cheese?" Well I certainly did not. She says that she has come to love the little rat critters. They do look soft, don't they? And what big ears they have!
It's been one of the most flat days I think I've ever had. Well, probably not. I just cannot seem to get started doing anything. I took a walk but it was horribly humid and still so hot and I hated it. There was not one thing about it that I liked except being waved at by a guy driving a very old, very noisy tractor down the road. He looked joyful. So that was nice.
I've already started obsessing about what to take to the beach. Not clothes-wise but things like flour and salt and olive oil and vinegar and should I take baking powder? Yeast? Rice? Potatoes? Cheese? Surely I have to take onions and garlic. When I go to town tomorrow should I pick up fruit and vegetables to take? There's a Piggly Wiggly Jr. on the island but we won't want to have to buy everything there as surely things will be more expensive. It's not quite like going to Dog Island where if you want it, you better bring it. We'll be able to buy seafood, I'm sure, and probably decent meat if we want it or hotdogs if we don't. As with all of my neuroses, I can tell myself until the cows come home that it doesn't make a rat's ass of difference if I take things or buy them there. We're not going to go broke if don't take ketchup and horseradish and have to get them at the Little Pig. And we won't starve no matter what. So what's the problem, old lady?
Same as it ever was- I'm freakin' crazy.
And obsessed with food. I remember how all the patrols in our Girl Scout troop would make up menus for our camping trips and one of the moms would take us shopping for the things we needed. We made delicious dishes like campfire stew (ground beef, canned soup and canned vegetables- I think) and well, I don't remember what else. Basically campfire stew. Although I do remember pancakes for breakfast and also once when our leader showed us how to make doughnuts by making a hole in pop-out refrigerator biscuits with our fingers and frying them in a huge skillet of oil and then dusting them with powdered sugar.
Surprisingly delicious.
Also? I still have that skillet and use it all the time.
Speaking of skillets, last night I made skillet spanakopita from a NYT's cooking app recipe and it looked like this. 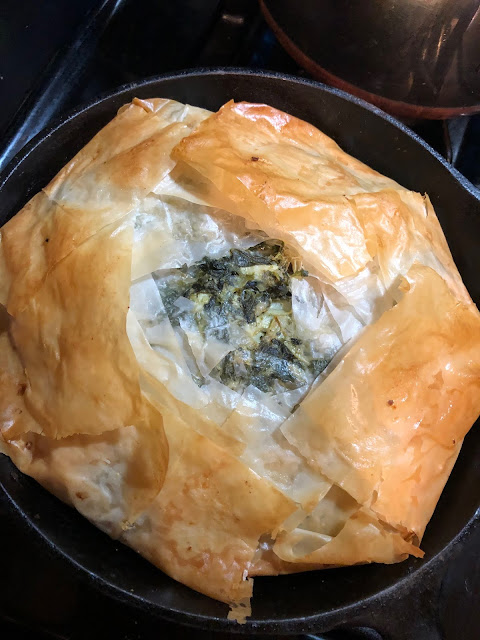 Yeah. I should have baked it a little longer. But it was delicious. I didn't have a few of the ingredients like feta and leeks so I substituted onions and shallots and goat cheese and also added some artichoke hearts and I have to say those things did it no harm. Ever since I saw the recipe I've been wanting to make it which is why I bought phyllo dough last time I shopped. I used a small skillet and basically halved the recipe so I cut the roll of dough in half before I thawed it and it worked beautifully.
Maurice news: Last week after the boys had been here with their matchbox cars, Maurice found one under a piece of furniture in the hallway, I guess, and spent about forty-five minutes PLAYING WITH IT! I couldn't believe it. She'd bat the car and then chase it and sit beside it for awhile as if trying to make up her mind whether or not to continue or perhaps to try and pretend she wasn't playing, and then she'd bat it again. I was stunned. Maurice does not play. Not in any sense of the word. And then last night, she went to sleep with us on a pillow at the head of the bed and when I woke up this morning, she was cuddled up next to my hip. She stayed in bed for quite awhile. Until she got hungry, I guess. 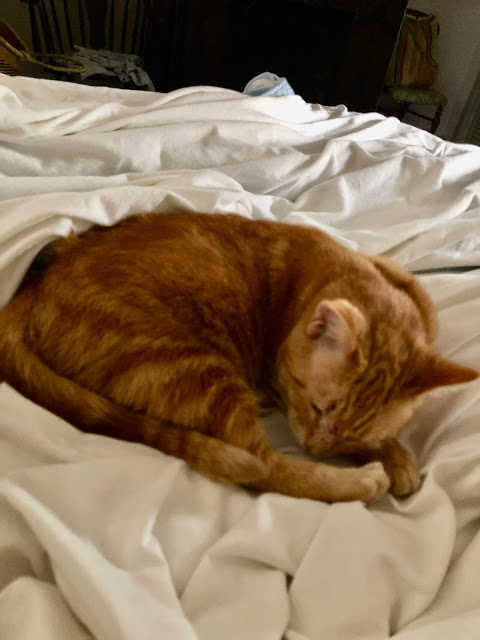 The most amazing part of that whole story is that JACK LET HER SLEEP ON THE BED! He didn't challenge her all night long. In fact, Mr. Moon said that when he got up once to visit the bathroom, she jumped off the bed, went into the kitchen to eat a few friskies and then got back on the bed.
I am gobsmacked. Perhaps she is mellowing a bit? Perhaps Jack is too? Although I have to say I did hear them have a bit of a yowling, hissing confrontation at one point today. But I don't notice any new bleeding on the poor girl so I guess it didn't come to that.
And as much as I'd like to have something of more vital interest to talk about, I just don't. Mr. Moon has been building sidewalls for his trailer all day long so that he can haul a load of mushroom compost for our garden and for Lily's garden. That man knows how to live during a pandemic. Start projects that take all of your attention and which lead to other projects and do them. Meanwhile, I ripped out some embroidery and watched a documentary about a guy who treated his suicidal depression by finding a shaman in Peru and spending a huge amount of time with him, taking various plant medicines including ayahuasca. He spent 119 days isolated in a hut, talking to no one and only ingesting the shaman-prescribed plants, fish and rice. That was only part of the journey. And he feels better now! There was a lot more to it but that was the gist. As he said at the end of the film, "I'm still here."
I'm still here too. I may be floundering and I may feel lost and I definitely feel useless and the high point of my day may be (is) going to bed but I do get out of bed and I suppose there is something to be said for that.
Love...Ms. Moon
Posted by Ms. Moon at 6:26 PM