Those Of The Male Persuasion Might Want To Skip This One 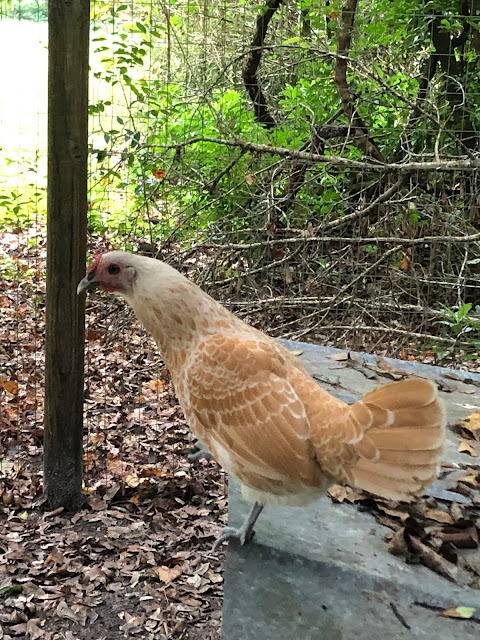 There's my little canary-hen, Miss Tweety. Every morning when I go to let the chickens out and throw them their scratch, she's the last one out of the coop. She hangs out on that little shelter roof until everyone else has pushed through the run to wait expectantly for their scratch to be thrown. She's a very skittish little lady as is Miss Violet, another banty, but I will point out that Miss V. is the longest-living chicken I think I've ever had. I haven't gotten an egg from Tweety in quite a few days so I think she must be laying somewhere else. Not only is she skittish, she's sneaky. Some hens are like that. She's not a fancy hen at all but I do love the designs that her feather-colorings make. A pretty little thing.

So of course I had to get all worked up about the procedure I got today. Which was ridiculous. It was what they call a transvaginal ultrasound to determine the thickness of my uterus. Not, as I had said, because I was having any problems but just as a way for my hormone-prescribing doctor to cover his ass. It was nothing, really. The hardest part was that they did an external ultrasound first which meant that I had to have a full bladder. My instructions had been to drink a quart of water an hour before the appointment and to "hold it." I was a bit worried about this. I mean- I'm a sixty-six year old woman who has given birth to four babies but it turned out to be okay. The tech lady was great. She didn't even make me change into a gown because I was wearing a dress with easy access to the important parts. She said she'd step out of the room while I took off my panties and handed me a sheet. I said, "Don't bother. You're about to see it all."
She laughed and said, "I see it all all day long."
Even the sheet was entirely unnecessary but I clutched it to me like it was serving some purpose. The whole thing was over in a few minutes and she said that it didn't look like I had anything to worry about which was what I expected and before you knew it, I was out the door and on my way.

And any men who have made it this far should just remember that this is only one of many, many things that women have to go through in their lives involving putting their feet in stirrups. For some bizarre reason, these sorts of exams don't bother me so much or cause too much anxiety in me. That's probably because my lady parts have been nothing but faithful and true my entire life and if anything, far too apt to work too well than to malfunction. I dreamed two nights ago that I was pregnant, and I was not best pleased about that, thinking that when the child graduated high school I'd be 84 (dream math!) but still, I put my hands on my belly in my dream and thought, "Well, here we go again."
Can't say I wasn't relieved when I woke up though, to realize that I was not pregnant and that I would not be attending a high school graduation on a walker. If I was lucky.

After all of that I went to Costco. Even though I had bought everything in the stores only a week before, I still had a very long list. Two lists, actually. One for Costco and one for Publix. I got through Costco quickly and didn't impulse-buy a darn thing which is no fun at all. Then I went to Publix and once again, overbought. I am still in a bit of a hoarding mindset. I realize that but I can't seem to stop it. It's not to the red-line level of crazy but it tilts in that direction.
Please remind me that I do not need ANY MORE CHICKEN to go into the freezer. Not for quite awhile. I even bought a package of frozen filo dough and when the check-out lady asked me what I was going to do with it I did not have a definitive answer.

"Maybe make a spinach casserole?"
We shall see. Meanwhile, it's in the freezer, taking up space.

And tonight we're having leftover chili and a salad along with leftover cornbread. So. Leftovers, basically. And I'm glad. For whatever reason, by the time I'd carried everything into the house and and put it all away, I was truly exhausted. I absolutely had to go lay down and sleep for awhile and I can't even remember the last time I took a nap.

I listened to more of the Amy Coney Barrett hearings and Ted Cruz made me want to vomit. He went on and on about how Democrats are attacking Barrett for her Catholic faith and how this country is built on religious freedom and rambled on about the ten commandments on courthouse lawns and Hobby Lobby (really- he did) and then completely changed direction to ask Barrett about whether or not she played the piano and oh! did her children "do" the piano too?

Well, here we are.

Oh! Here's a picture that Lily took of her daddy working on her garden today. 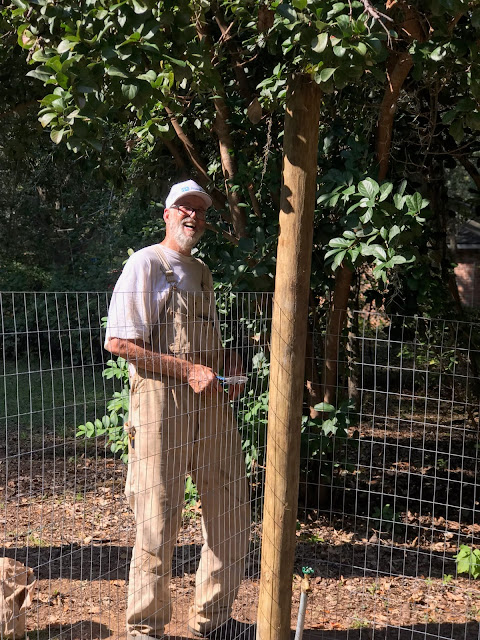 She wrote, "Y'all, Boppy just left and as usual I'm wiped and he seemed fit as a fiddle! Always amazing me!" But Mr. Moon did tell me that Lily did a lot of hard work too and that he was really proud of her.
Strong woman! Strong man. Made me feel even worse about having to take a nap after the huge effort of going grocery shopping.