Y'all Can Have Your Green Juice. I Want To Eat My Greens 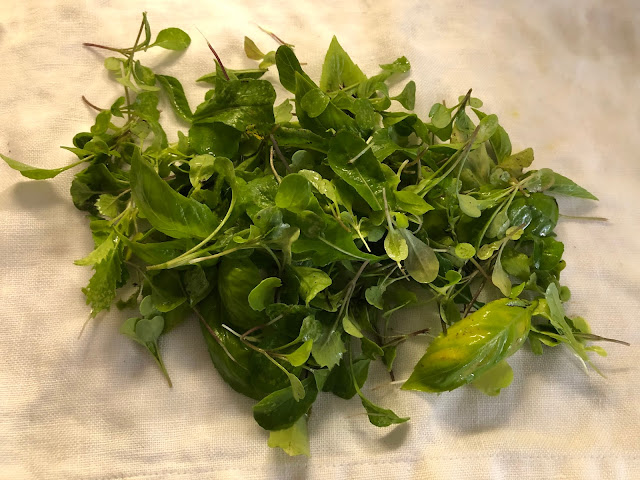 Mark it on the calendar. Tonight's supper will include a salad made not just with store-bought lettuce but also the first tiny thinnings of the garden greens. In there are newborn kale, lettuces, arugula, and collards. Also two types of basil. And a few leaves of mature bonsai arugula which I planted in a pot where they have not, to say the least, thrived. But each piece of each leaf will add its own peppery goodness to the bowl. I love that when I pinch the almost microscopic roots from the arugula babies I can already smell their essence. It's almost like human babies who have their very own self-ness from birth, just in infant form. Anyway, aren't they beautiful, those clean, wet wisps of living green life? Sometimes it occurs to me that those people who believe that they can live on sunlight are correct, in a way. Plants take sunlight and turn it into food that we can eat and thrive on but the sun-eaters do forget that there are other elements (quite literally) involved and that trying to forego those elements and the steps that the plants go through to produce the calories and nutrients we need is a bit ridiculous. I don't care what certain yogis have claimed to do, the human body just doesn't work like that.
I just looked it up. People who believe that are called "breatharians." Good luck with that!

Why must humans always want to go right on past the true miracles of life on this earth like the Krebs cycle and evolution and sunrise and sunset and gravity and tides and physics and love and oak trees and octopuses and Keith Richards and eggs and butterfly migration to believe in bullshit like living on prana and psychic healing and walking on water and there being a god who only managed to have one son despite the fact that he's a god, who sends that son to earth to be tortured and killed for the tenuous purpose of saving the very people that the god supposedly created from the original sin that he supposedly allowed those people to become infected with so that those people can go to a supposed eternal life which will be perfect when they die their earthly death? 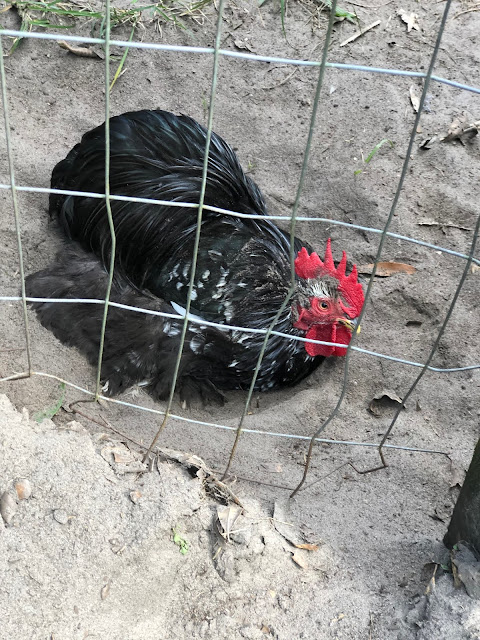 This is Mr. Fancy Pants taking a dust bath. He was flinging his head into the dirt to work it down into his feathers and wallowing like boar hog. He's the funniest little guy. Today I watched as Liberace chased him away from one of the hens and then, as soon as Liberace ran to see to another situation, Fancy Pants jumped up on the hen and had his way with her. It's not a graceful act, y'all. He's so small that he has to sort of perch on the ladies instead of covering them with authority but he manages. I'm not sure why Liberace hasn't just slayed him with his sharp spurs and lethal beak yet. I don't think he really takes the banty rooster seriously but I'm here to tell you that if another hen sits on a clutch of eggs around here, old Lib ain't gonna be the daddy of all of 'em.
I have to go make supper now.
Shrimp and grits.
And...a beautiful green salad made of fresh pulled miracles.
Amen.
Love...Ms. Moon
Posted by Ms. Moon at 6:24 PM