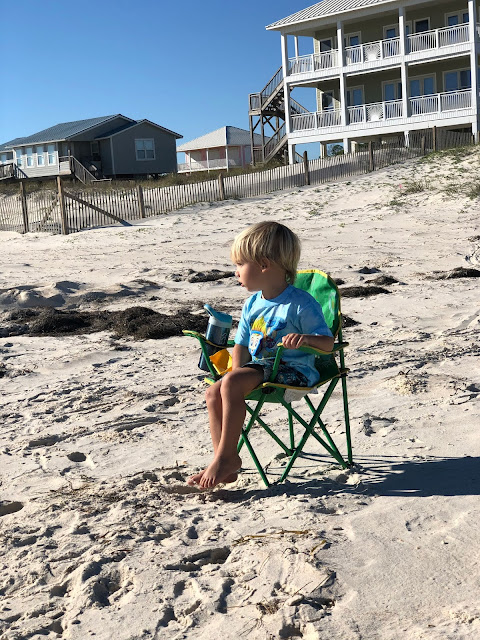 This was Levon at the beach yesterday. He sat in that chair and just watched the water and listened to music and thought his thoughts for a very long time. Boppy was a few yards away, fishing in the surf, his mama and brother were in the water, and I was sitting a few feet away from him, reading my book and feeling a sort of peace and contentment that I've not felt in a very long time. 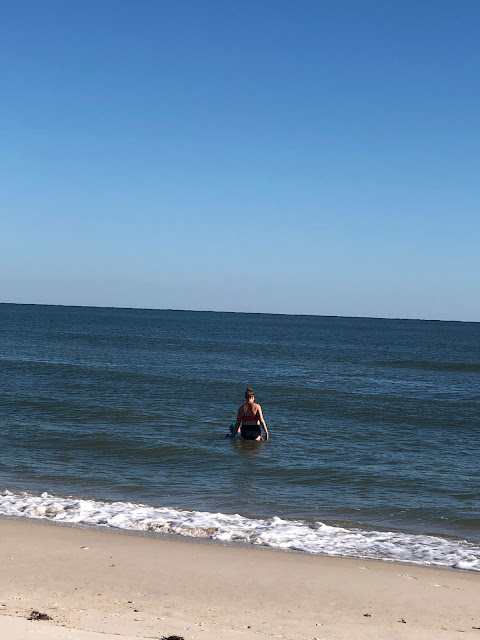 This has been the mellowest of vacations, of beach stays. We follow the schedule of August and Levon and weave our activities around them. There are meals and teeth-brushing and TV and stories and bike riding and chalk drawing, sand castle building and trackhoeing and picture-making and many, many conversations about trackhoes and magical inventions and whatever comes up to talk about. There is coffee going half the day and there is rum and pineapple juice at sunset time and every now and then a shot of tequila because...well. Of course. There are boys in the bathtub and naked boys running around the house and pajamas and and there is laundry.
Because...of course.

Tequila and laundry. They go surprisingly well together.

It is sweet and easy and we watch the seagulls and pelicans and the gulf fritillaries fly, sometimes solo, sometimes in pairs, and sometimes rising in a miniature whirlwind of three together, twisting and floating up into the sky. We pick sandspurs out of little boy feet and we get stern at bedtime, sometimes, and other times all it takes is a little back-rubbing and slumber comes.

I am amazed at how smart these boys are sometimes. Last night we read The Frog Prince from a book of fairy tales and Levon said, "This story is funny and scary."
And it was.
If I read something that August doesn't quite understand he says, "Why you fink?" I love that he says "fink" instead of "think." He's my little cockney lad.

There has been so much cuddling and kisses, too. Sometimes begrudgingly accepted, sometimes sweetly given. Jessie and her father giggle all day long. Fart jokes abound. Brushed teeth must be inspected and described as "Perfect!" Clean hands, too. Jessie is far better at hygiene than I ever was as a mother. She is far better at a great deal of this mothering thing than I ever was. Her patience is astounding and her boys are joyful and loving and polite. When we played Go Fish the other day, August would say, "If you have any twos, can I please have one?" Levon however, has indeed grasped the spirit of the game and from Boppy's lap would say, "GO FISH!"

We've had pancakes twice. Shrimp twice. We got pizza one night and yesterday we went to a playground and the sky was so blue that it was like the dreamy dream of a blue sky. 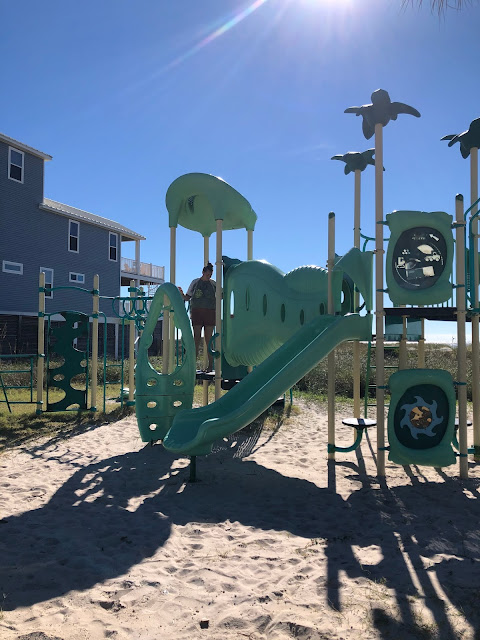 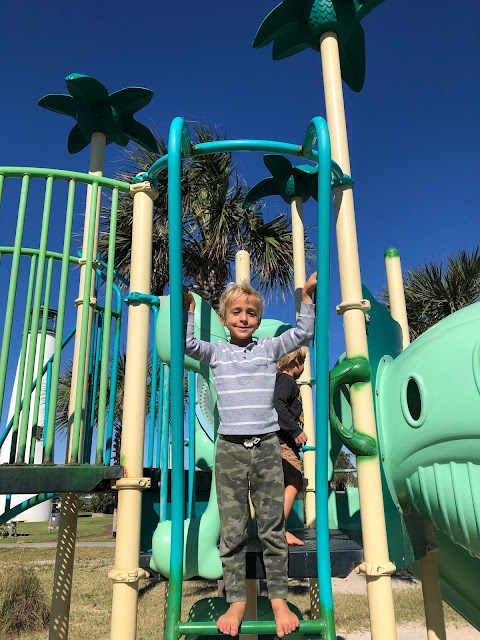 And the sea did indeed lay down. 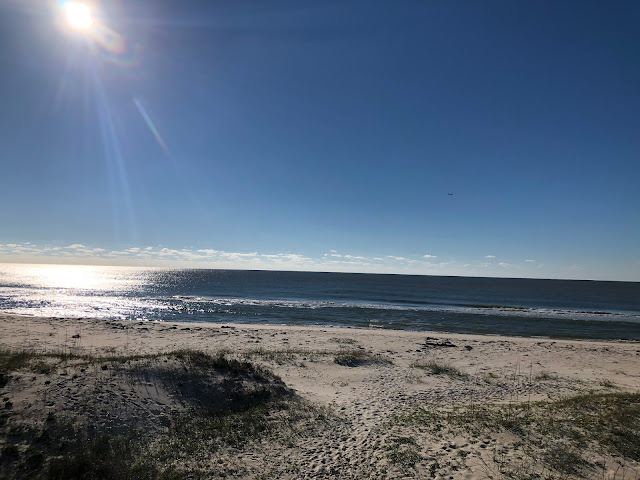 After the playground Boppy took the boys, and Jessie and I went and had lunch at a place by the bay where we sat outside at a picnic table and ate oysters and a shrimp wrap and then we shopped a little and bought hoodies for her and Boppy because they didn't bring warm clothes and we got tie-dyed T-shirts for the boys. In one shop which we walked into and thought, "Nope, nothing here for us," Jessie found the prettiest flowery, flowy wrap dress, a frock, a fairy tale in itself of a dress. Half price.

We masked and felt okay about it all. It was the first time I'd eaten at a restaurant, the first anything-but-grocery-shopping I'd done since March. Except for that one fraught trip to Joanne's fabrics. When we got back to the house, Levon was asleep on the couch, August happy to have his Bop to himself.

This morning there is pumpkin carving. 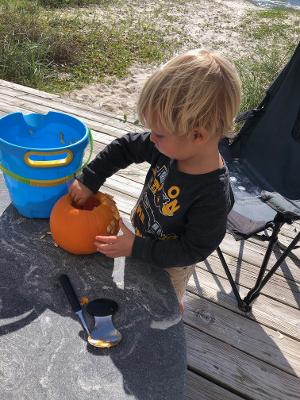 To no one's surprise, this is going to be a trackhoe pumpkin. 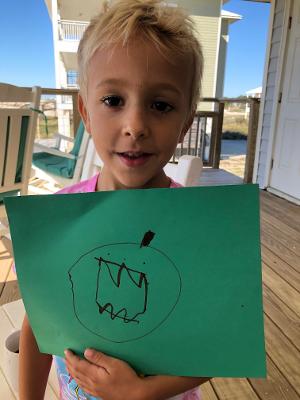 I think I'll go take a little walk. It is neither hot nor chilly. It is perfect and the gulf is moving just enough to play its hypnotic shushy song. And then maybe there will be more of this. 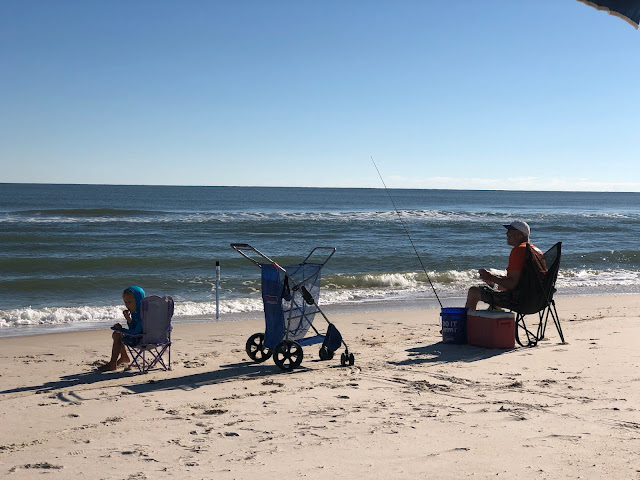 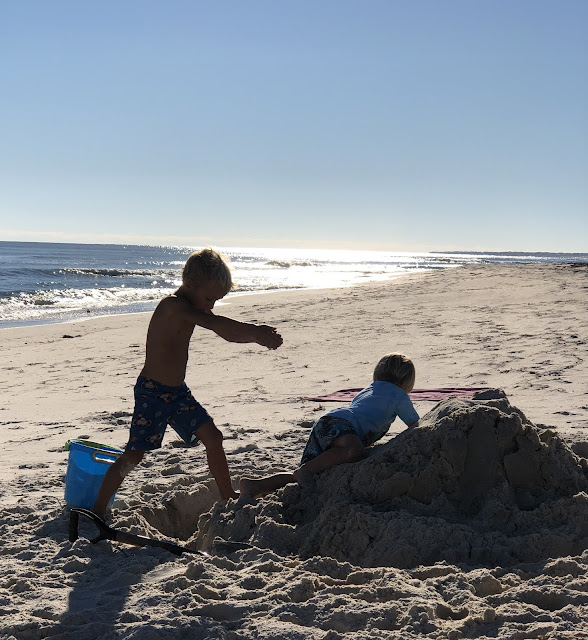 Tomorrow we leave this dream. It's passed like one deep sigh in sleep.