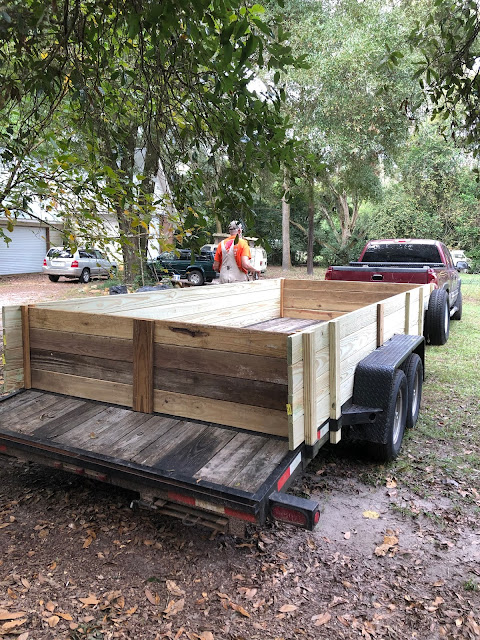 Those are the trailer sides that Mr. Moon built yesterday. Aren't they beautiful? He's so handy. And precise. He follows his father's admonition that anything worth doing is worth doing right. He said that to me the other day and I, because I am a worthless and lazy person, said, "Well, that's not always entirely true."
I wonder what sort of advice my father would have given me if I'd grown up with him around. Probably something like, "Always take the beer at the bottom of the ice chest."
Which is not bad advice, really.

He got up this morning and drove his new and improved trailer to Quincy, Florida, where he'd found a mushroom compost connection. He was so excited. And happy. And then, when he discovered how much mushroom compost he could get for sixty dollars, he was beyond thrilled. Check this out: 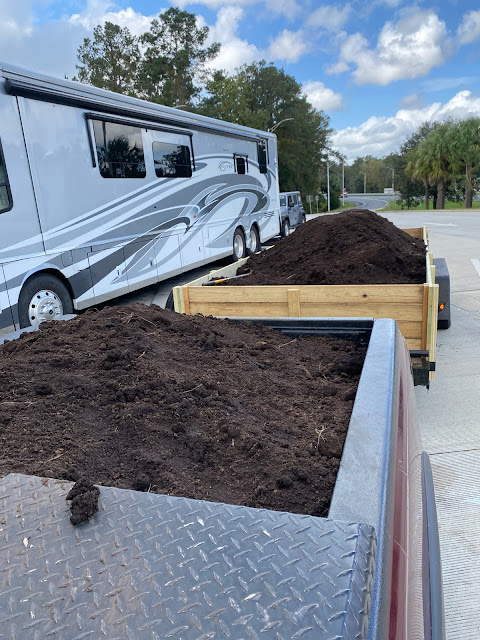 The truck AND the trailer, filled to the tops. He said that he drove the trailer over to Lily's, parked it by the garden, unhooked it and said, "There you go."
I hope Lily feels like shoveling. I used to like to shovel stuff. Not so much anymore. Mr. Moon is shoveling the compost onto our garden from the truck bed. I went out to pick some micro-greens and I have to say that that's some mighty pretty mushroom compost. And a fine looking man, as well.
So I went to town today. Had to pick up my new hormones and also a prescription at Publix so I did some Costco and Publix shopping too. I didn't really need that much but I picked up a few things for our trip. I talked to Jessie and we decided to go ahead and get little bottles of things to take like vinegar and oil and just make all of this as easy as possible. My children are so smart. I was going to get little bags of flour and cornmeal but I forgot about that. Oh well. I'm sure they sell those on St. George Island. I got cherry tomatoes to take and onions and little potatoes. Also a huge amount of butter lettuce because I love butter lettuce and Costco only sells it by the cartload.
I procrastinated so long this morning before leaving the house that by the time I got home and got everything unloaded and put away, it was almost four o'clock. This means that I have a great excuse for not doing a damn thing today that actually needed doing. Okay, I cleaned out the hen house and watered porch plants.
We need rain. It'll probably wait until I go to the beach and then it'll rain daily, all day long. Which will be fine. We'll still have fun. We can sit on the little porch and watch the rain on the ocean. I remember one time I took Hank and May to the beach for Easter break and the place we rented was simply foul. Smelled horribly of rat shit and it was not exactly clean and besides that, it was windy and cold and it did indeed rain every day. I don't remember having very much fun and I seriously doubt the children did either. I'd even saved a new book to read- an Isabel Allende novel- and it turned out to be sadly disappointing.
Well, every day at the beach isn't exactly a day at the beach if you know what I mean.
And honestly, the forecast does not call for much rain next week although it's going to be a little cooler. Which will be fine. Good for walks. I hope we get to see dolphins. No matter how many times I've seen them, every time I do is a magical and mystical experience for me.
Are you going to watch any of the debate tonight? I might watch a few minutes to see how The Orange Blob handles his mic being muted. Can you believe that we live in a country where they have to mute the  president because he can't follow the rules of common courtesy at a debate? It's all so insane. Every fucking day of his "rule" has included at least one incident or report of an incident that staggers the mind. There is no bottom to his ability to descend to the limits of uncivilized behavior. You could write an entire book entitled, "Can You Believe?" listing one outrageous and formerly not-to-be-believed action or quote after another. It would go on for hundreds of pages.
And the saddest thing is that we've become, if not completely inured of the crap he does and says, the lies he tells, the actions he takes, somewhat deadened in the heart to the belief that no president would ever act this way.
"Oh yeah. They're going to mute his mic for two minutes when it's Biden's turn to talk. Makes sense."
He's just going to scream anyway. He'll spit his vile hatred, lies, and contagion even louder and harder. He'll scream about mythical Hunter Biden hard drives and China. He'll swear he's the been the best friend Black Americans ever had. He'll insist that his health plan is amazing, the best, the most cheapest and wonderfullest and beautifullest and he'll get around to presenting it when...hell freezes over? He releases his tax returns? He tells us about his bank account in CHINA?
Have you noticed that when he "dances" he looks like a marionette being jerked about by a particularly inept and ungraceful puppet master?
Fitting.
He truly is the absolute epitome of a rich, horrible white man whose daddy didn't love him. Or his mama either.
And on that cheerful note, I'm going to go make supper!
See you tomorrow.
Love...Ms. Moon
Posted by Ms. Moon at 6:30 PM