I'm Lazy Even If My Hens Are Not 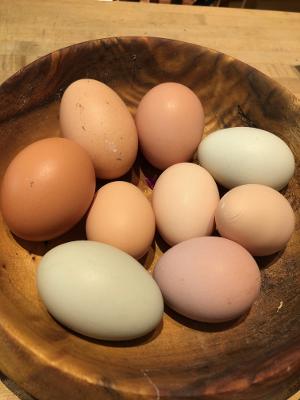 This morning Mr. Moon made himself egg-in-a-hole which he loves but because I had given away all but two of our eggs, we had none when Vergil came by after sitting in the woods and hoping for a deer this morning. Jessie and the boys were going to come and meet him here and I wanted to make him a little breakfast and just as I was bemoaning the fact that we had no eggs, I heard a hen singing her "Come get me, Liberace! I have laid an egg!" song and sure enough, there was an egg in the pump house nest and I made Vergil the freshest egg sandwich on the planet.
The egg bowl now looks like this, though, as nine hens gave me eggs throughout the day and I can't say for sure there aren't any more. I sure do wish I could figure out where Tweety is laying her tiny eggs. Sometimes you just need a tiny egg for a recipe, you know? Like if you're cutting a recipe in half and it calls for an egg. One Tweety egg would be the perfect size for your needs.

I've been lazy today. Lazy as can be. I've mostly sat on my ass and done some crosswords and that is about all. I did a little more weeding and then flattered my husband into making two rows for me to plant some carrots and celery in, which he did. The flattery was sincere- as I have said many times, his rows are as straight and true as Elvis Costello's aim. It hasn't been too horribly hot today. Maybe up to eighty. But it was cool last night and we opened up the house and turned off the noisy, planet-destroying AC. Heaven. And I still have the house open and am glad for it.

I finished listening to a book today that I thoroughly enjoyed. 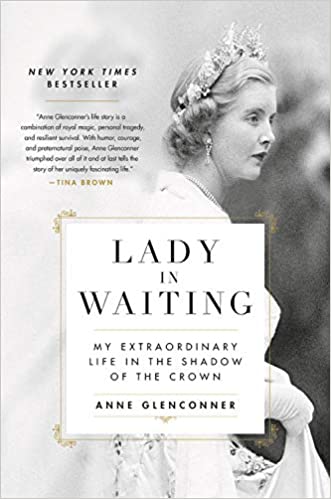 Anne Glenconner (that's LADY Anne to you and me) has indeed led a most extraordinary life. Now eighty-eight years old she has written a book about that life and narrated the audio version herself which is just absolutely a treat. Those regal tones describing some of the raucous and raunchy events from her life is worth the price of admission. Not only was she Princess Margaret's Lady in Waiting, she was also married to a man who was, to put it mildly, extremely eccentric and hard to live with as well as being fabulously wealthy, charming when he wanted to be, and a visionary in his own way. They had five children, two of whom died tragically at young ages and she's traveled all over the world. The name-dropping in the book is bountiful and as natural to the narrative as it could possibly be. The woman has known everyone from Mick Jagger to the Queen. Of course. And this isn't a tell-all book by any means. As one might suppose, she is never vulgar or without grace. But she does have some stories.
I highly recommend this if you listen to audio books. I got it from my library.
I don't suppose that Trump has died today, has he? Not hoping he has or anything, of course. Just, well...wondering.
As I have been since November 9, 2016.
Did you see where he said that if he lost the election he just might have to move out of the country? I do believe that's the truest thing he's ever said. And one of the most heart-lifting, too. Let's make it happen!
Have a sweet Saturday night.
Love...Ms. Moon
Posted by Ms. Moon at 6:06 PM