The Good, The Bad, And The Downright Evil 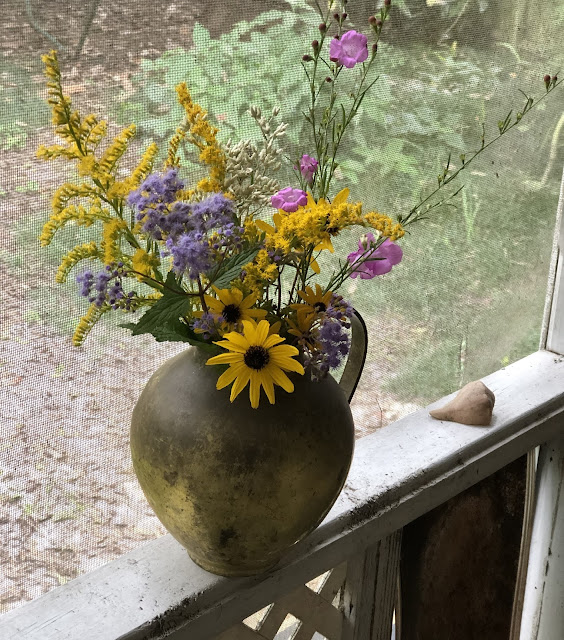 I picked those pretties on my walk today. It is the time of the fall yellow and lavender flowers. I can hardly bring myself to pick wildflowers any more because I don't want to rob a pollinator of even one blossom but there is such abundance right now that I figure just a few of each won't matter much. 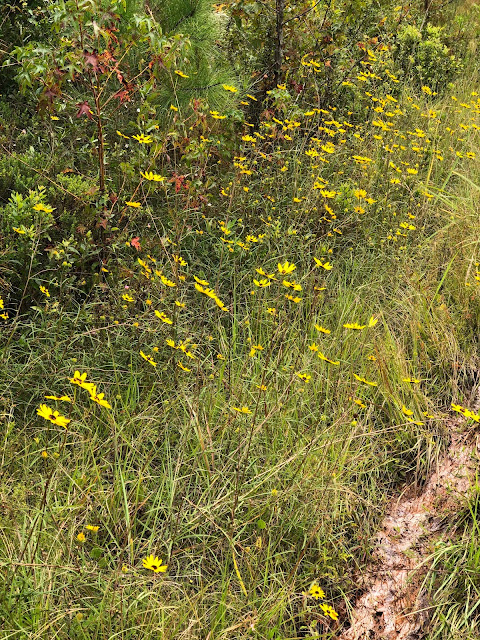 That's a very boring picture. Why didn't I take it from another angle? I really am not a visual person which I blame on the fact that I was half-blind nearsighted by the time I was prescribed glasses at the age of eight.
I don't have much to say about today. I wandered about doing a few things, each of which took far more time than they should have. One of the things I did was to cut down and hem an old sheet that Mr. Moon can hopefully use for a new blanket. I've spoken before how very, very differently we feel temperature and our responses to it. My half of the bed can have a quilt, folded over double, and a blanket, folded over double while his side has a sheet and his thin, thin flannel blanket. I mean, you can see through this thing. And over the years it has gotten thinner and thinner to the point where it has holes in it which cannot be mended because the fabric really can't hold the thread to patch it with. So I've been trying to figure out a substitute for him and I found this old sheet which I don't even remember owning which is as soft as it can be through years of use (I guess) and I cut off about eighteen inches to make it a more reasonable width for one man's needs and hemmed that up.
Now this should have taken about ten minutes. But it took me about an hour. Or more.
I had to get the sewing machine back out and rethread it with white thread and find a white bobbin and iron the hem into the sheet before I could begin. The white thread I had absolutely did not work because it is some sort of quilting thread and the way I knew it didn't work was because when I tried to sew, it only knotted and completely fouled up between needle and bobbin which required some surgery involving removing the foot, and then I rethreaded with more reasonable white thread and I could not find my bobbin and the bobbin case. It was like they had disappeared off the face of the earth. I had only moved from my seat at the table to where the sewing dresser is which is a distance of less than ten feet and I searched through the trash in case I had accidentally tossed it there and I looked through various bowls on the sewing chest where I keep extra thread spools and elastic and bias tape and a bunch of other assorted unorganized stuff and it was just nowhere and I thought I'd lost my mind.
I finally found it on the floor beneath the table where I sew and one would have thought I'd have heard it when it fell but no, I did not.
So that took another twenty minutes but it's done now.
I sure hope it works for my husband's sleeping comfort.
On a positive note, last night's gumbo was superb! 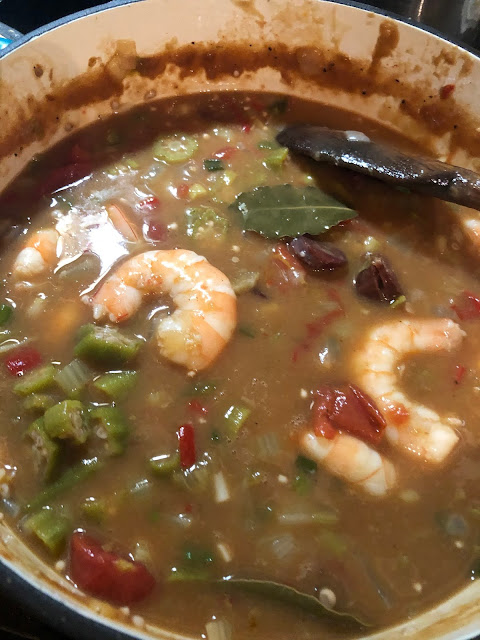 I absolutely could not have been happier with it. We're having leftovers tonight. And the bread came out beautifully too. I have discovered that using the food processor for the initial mixing and kneading and adding perhaps a quarter of a cup of milk and a teaspoon of sugar or honey to the ingredients (sourdough heresy, I am sure) creates a loaf that is what my husband likes to call "fluffy." And that's with it being one third whole wheat, too. Mr. Moon cracks me up when he describes my bread in his best Paul Hollywood voice. He never fails to mention the "croom" which is how Paul pronounces "crumb".
It never ceases to amuse us. 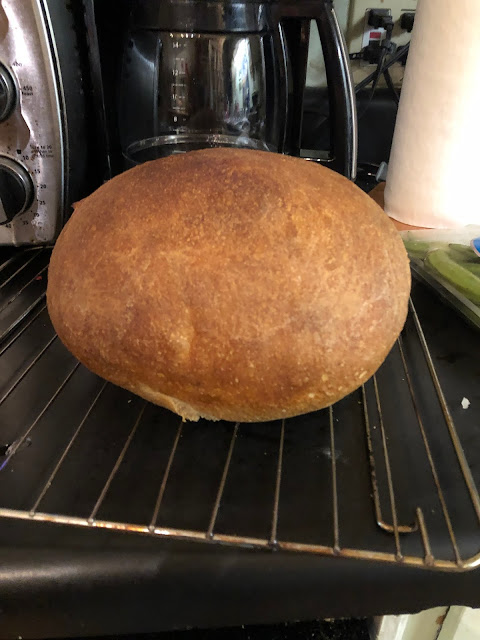 I was going to plant some today but just never got around to it. I am still finding myself completely unmotivated. I just feel so flat. I truly do want to plant some of the fall garden though. I know it would be good for me and also, it's just so much more meaningful to see the tiny seeds begin to sprout if I'm the one who put them in their birth rows.
I don't know. I really do not know what's going on with me. A sort of ennui, I suppose, inspired by the strange times we're living in. There's an almost "what's the point" feeling about all of it when I consider the current Washington situation to the Supreme Court nominee to the upcoming election.
If anyone thinks that this is going to be a free and open and honest election they are simply wrong. If you want to have nightmares as interesting as mine, read THIS ARTICLE.
And I see that the narcissist in chief is going to be discharged back to the White House this evening. He may already be there. The thing that's striking me most about this whole situation is that because he and his people have lied so much to the American people, we truly do not know what the status of his health is.
We have come to that.
And I know that presidents have lied about their health forever. Franklin Roosevelt not being photographed in his wheel chair, JFK not be forthcoming about his chronic use of pain medication. There's a long history of these sorts of prevarications and deceptions. But this is 2020 and we the people deserve to know what's going on with the president's physical and mental status and what the lingering effects of his illness might mean. Not that the man was stable in any way, shape or form before he inevitably caught covid or started taking medications which can cause all sorts of unwanted side effects, both of the body and the mind.
Oh well.
Here. Here's some joy. 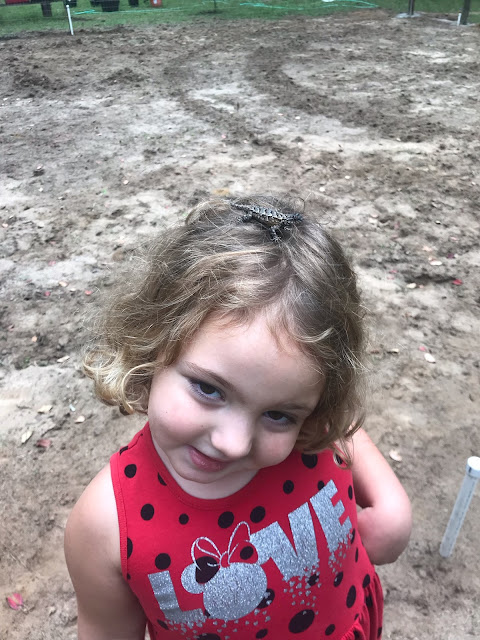 I'm trying to convince her to take it back to the tree I found it in but she's not about it. I even told her it would poop on her head and she said "it's ok, I love baths."

Oh, our darling little naturalist. I thought the lizard was a Cuban lizard but Lily informed me that it's an Eastern Fence lizard. Learn something new every day. Whatever it is, it's a fine fashion accessory for our Magnolia June.

And here's a picture of some of the chickens, scratching and dirt bathing right outside the garden which it would appear that Mr. Moon has successfully secured from their entering it. 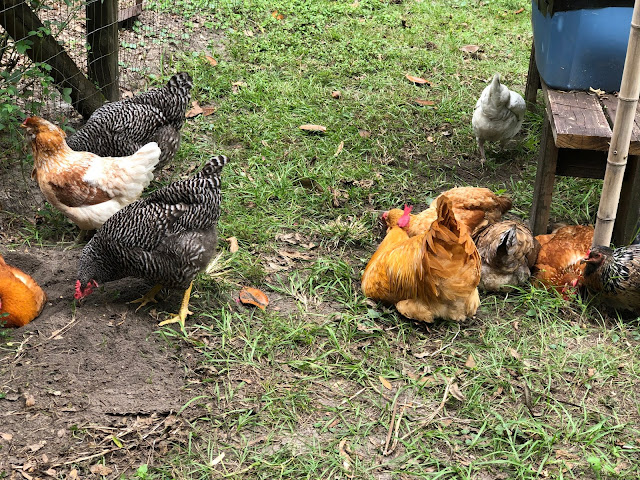 As you can see, Miss Pinto is looking longingly through the fence at the rich dirt which always has worms and other tasty treats which she is now so tragically denied.
See you tomorrow.
Love...Ms. Moon
Posted by Ms. Moon at 6:45 PM