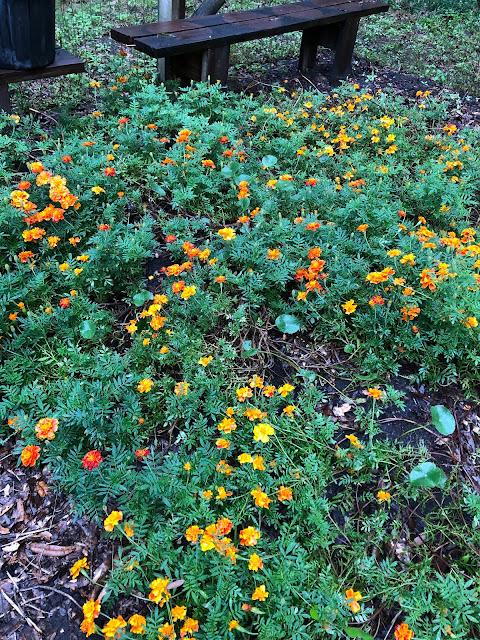 Months ago I planted the contents of one small pot of marigolds into the ground and somehow, by some miracle it has spread to cover at least a six by six foot space and until just a week or so ago, the marigolds did not bloom at all, just grew bigger and stronger leaves until suddenly- kaboom! Here they came and I am calling it my Day of the Dead flower garden. Perhaps they were just waiting until they would be ready for November 1. Perhaps they are Mexican marigolds. Perhaps they will call forth the souls of our beloveds who have gone on ahead.

My thoughts have been a bit dreary today. Not too dreary but this morning's dreams were beyond disturbing and it's always so hard to shake that mess. And then, something happened that broke my heart in every way that a heart can be broken. And it wasn't even a bad thing. Just something that I never, in my entire life, thought I'd do.

Lily, knowing that we're leaving tomorrow texted to see if I wanted a visit from her and the children and of course I did. They came over and when they first got here she said, "Get a sheet so we can hug you through it." And I thought to myself- Never. I will never stoop to hugging through a sheet. That is the most absurd thing I've ever heard."

Things moved on. Maggie found six eggs. She fed leaves to the goats next door. 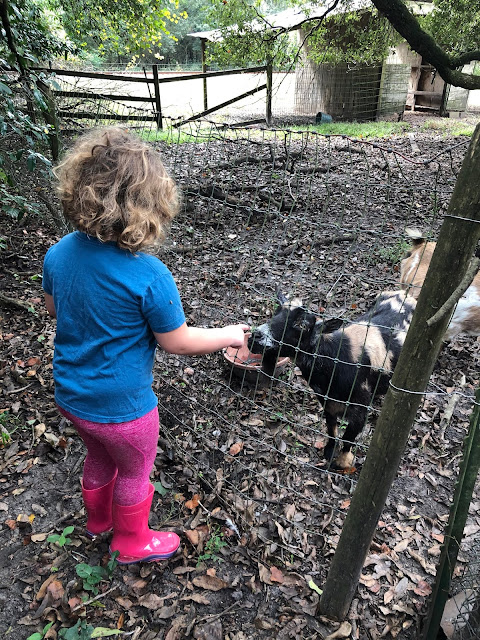 She desperately wanted to get into the pen so that she could pet them but alas, she could not. She did get to pet one of them on the head who licked her hand and that thrilled her. I'm not sure I've ever seen a child so undaunted by animals and insects as Maggie although Maurice scares the dickens out of her which shows she's smart. I love the woman baby's pink pants and hot pink boots.
She showed us her child-strong tablet that she'd gotten from the library, loaded with learning games. How cool! How wonderful! Is there anything better than a library?
We settled around the table in the back yard to chat after I got Magnolia the farm for her to play with on the steps. I passed out our fancy fans for keeping cool and deterring mosquitoes from our faces. 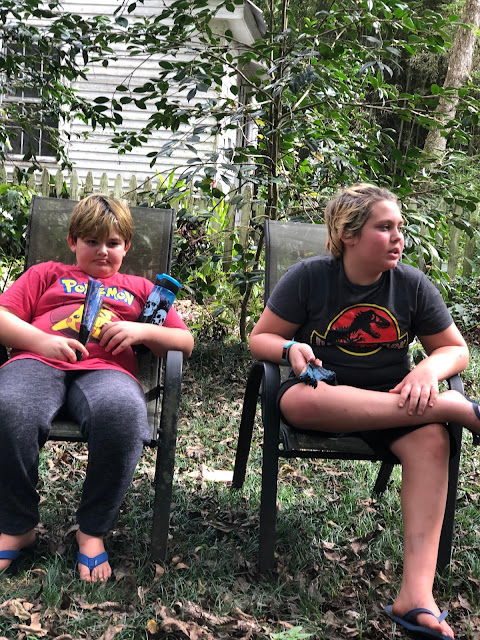 It was not too hot and the bugs weren't so bad and it was pleasant. The boys told us about how school is going. Gibson is getting all A's except for one B and Owen is doing pretty well too although I did not get the breakdown of his grades. Here's a picture that Lily sent yesterday of him doing his digital learning with Dottie on his shoulder. 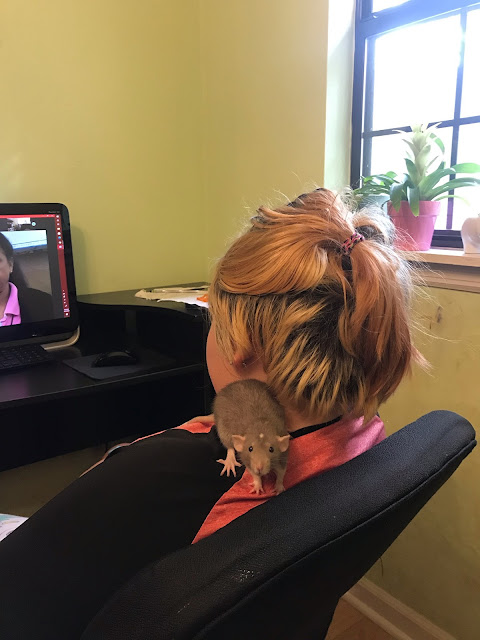 How nice to be able to have your pet with you in school! I love that.
Anyway, our visit was a good one and I told Owen my plan that when he is sixteen he will move in with us and he can help Boppy restore the old pick-up that he's been promised and can help us out. I think that in five years we might appreciate a little young-man strength around here. It's a sweet dream, anyway. I promised that I would cook for him.
And then, it was time for them to leave. Magnolia had borrowed a baby doll and settled it on her hip the same way I always carried my babies. 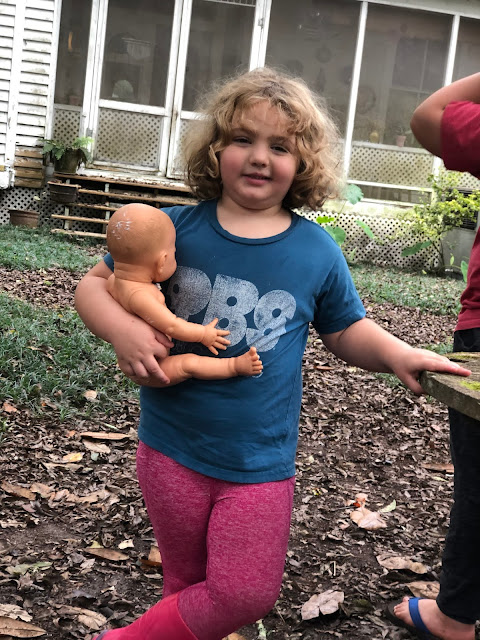 She was so happy.
They were getting into the car when I said, "Stop! Wait! I'm going to go get a sheet."
And I by god did.
We made it like a joke, you know, to hug through a sheet.
But it wasn't a joke for me or for Glen or for Lily. I hugged Owen first. He's almost as tall as I am now and as I put my arms around him, draped like a tricker-or-treater in his mama's sheet to be a ghost, I almost couldn't stand it. Yes. A sheet was separating us but I could feel him and his warmth. And tears came to my eyes. Then his grandfather hugged him. 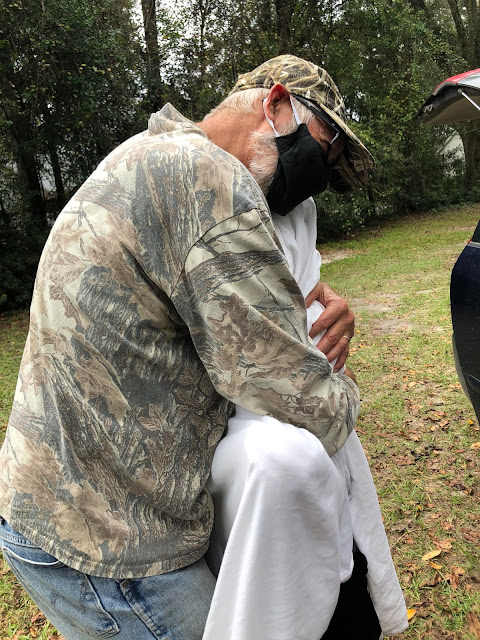 And I began to cry in earnest. Lily and the children wore masks as did Mr. Moon, as you can see. I didn't. I'm to the point where I really do not care but Lily won't let me get away with that. They are all exposed to their loved ones who deal with the public daily. And then I hugged Maggie and she hugged back hard and giggled and giggled and her Boppy had his turn and then we hugged Gibson and I told him, "Hug me back" and he did and he's so strong and so my Gibson and I kissed them and kissed them all over and over and then it was Lily's turn to drape the sheet over her and I cried so much. She did too.
And like I said- it broke my heart even as it was the best thing ever or at least in all these months and it could not have been more absurd and it could not have been anything that I ever, in my entire life would have predicted doing.
They all piled in the car then for real as I held the folded sheet and Maggie asked if she could buckle in her doll and I said of course. I asked her what she was going to call her and she asked what I thought. "Tina?" I asked. I suppose I was thinking of Eggy Tina.
"I like cool names," she said.
"Is Tina a cool name?" I asked.
"No. I mean, her name is Cool."
And thus, they drove away, Owen and Gibson and Maggie and Lily and Baby Cool all strapped in and as they left they yelled, "We love you!" and I cried some more and I'm crying now.
What strange times.
Well. Tomorrow Mr. Moon and I will have been married for thirty-six years. We were only thirty when we married so yes, we've been married to each other for over half our lives. I think back on how it was when we married. We were not babies. I'd had two babies. But we were still so young. I was so messed up in my mind and emotions but despite that, despite everything, my heart told me with no uncertainty that this was the man. There was nothing about him that I needed to fix or change. He was fine the way he was. Loving and strong, kind and good. Funny and upright and just enough of an outlaw to satisfy my bad-girl soul. And of course, beautiful.
I did have second thoughts when he told me right after we were married that one day he'd really like to raise some beef cows.
"What have I done?" I thought.
Of course now the idea of raising beef cows is far from the worst thing that I can contemplate a husband doing and of course we have both changed over the years. I'm not nearly as crazy and he's...well, actually, he hasn't changed that much. He's still exactly who he was and I would marry him again every day of my life.
My heart was completely and utterly right and I am so glad I listened to it. 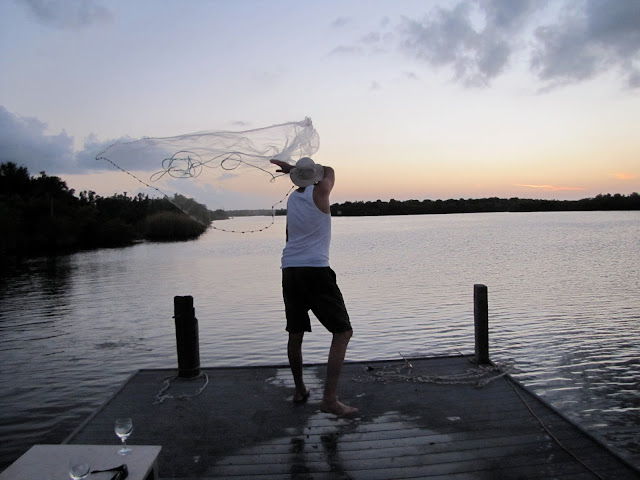 Here's a picture that came up on my Facebook memories today. This was ten years ago and we were in Roseland on the dock of that magical place we stay on the bank of the Sebastian River, my childhood heart's salvation, the fertile Nile of my imagination and wonder.
Maybe he'll take his cast net with us to St. George. I still love to watch him throw it.
Peace, y'all.
Love...Ms. Moon
Posted by Ms. Moon at 6:35 PM