I Think That For The Rest Of The Year Every One Of My Posts Is Going To Be Titled WHAT THE FUCK?! 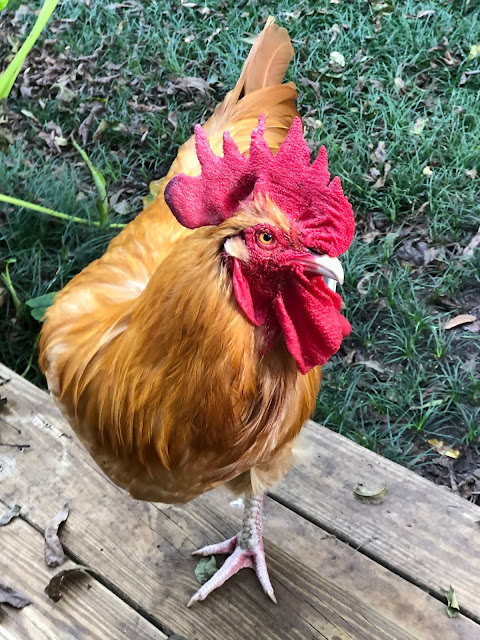 Welcome to Lloyd where the temperature is quite pleasant, the mosquitoes are not quite as bad as they were and the gnats are trying to to populate the earth fed on our blood. Gnats seem to especially enjoy the combs of roosters and it was quite a feat to get that shot because Liberace is constantly tossing his head to try and get rid of the tiny demons. I've even seen the hens helpfully pecking at the gnats tormenting their manbird and I wish I could get a picture of the ladies standing on tippy claw to try and snatch the bloodsucking pests.

So how have you been today? I've been a wart on the butt of the world. I swear to god. I haven't even got any jam to show for my...whatever it is I'm going through. I cleaned the hen house but it'll be all pooped up again by tomorrow morning. I was invited to a fish fry this afternoon. Or my husband was, and wives and partners were invited too. The guys Mr. Moon fishes with took a fishing trip awhile back that he wasn't able to go on but they asked him to come and share some of the bounty. I wasn't even aware that I was invited until a few days ago at which point my entire being screamed NOOOOOOOOOOOOOO! and I told my husband that really, I just couldn't.
Surprisingly he was a bit shocked. I have no idea why. Has he not known me since 1983? Yes. Yes he has. I told him to just tell the host that I have an anxiety disorder and could not attend. Which is the truth.
Anyway, I did make potato salad and tartar sauce for him to take. I hope it was enjoyed. So I guess I did do that.

Before he left he planted collards and arugula and mesclun seeds. Man, his rows are straight. He uses devices to make straight rows. Like, bamboo poles and pieces of PVC to line 'em up. When I plant, the rows wander and weave like my thoughts. I don't think we need to search here for a metaphor, really.

Well. What in hell is going on? When I woke up this morning I wondered if Trump was still alive. It would appear that he is although who knows? I watched the dog and pony show of many physicians and nurses in front of Walter Reed, reporting on the president's health status. That was all full of smiles and reassuring little jokes and eel-like maneuvers to avoid saying whether or not Trump had been on any supplemental oxygen ("He's not on it at the present time!") or when exactly Trump knew he had the virus despite reporters' best efforts at trying to get this information out of the man. But it was reported that his fever is normal, his oxygen levels are great, his BP and so on and so forth are within the range of normalcy for Trump and blah, blah, blah. He also referred to Trump as "slightly overweight" so I don't know how much we can trust him either as a doctor or a person.

After that, someone told someone that in fact, Trump's symptoms are troubling. Meaning...what?

Let's face it- we are not going to get the truth out of anyone on the record. The man could be laying up in Walter Reed, watching Fox News and eating take-out McDonalds that some poor Secret Service guy had to go out and buy, dipping his french fries in the pools of ketchup that his nurse (an Army major) squeezed out of the little packets she'd torn open for him, or he could be laying in a bed in a medically induced coma on a vent. Or anything in between. Who knows? Not me. And not you. And certainly not your crazy ass uncle who uses the little praying hands and American flag emojis on everything he puts on FB praising Trump. I would love to go to the FB page that I used to occasionally visit called Trumpified News to see what his base is saying about all of this. I used to comment on that page and got blocked but I still used it for insight into the demented minds of the deplorables. But guess what? It's gone. Disappeared. No sign of it. Guess they forgot to send me a memo.

Anyway, here's my favorite take on it all. Trae Crowder. The Liberal Redneck.

He's got some good points.

And have you heard the audio of Melania saying, "Fuck Christmas, who cares."?

Oh gosh. Bless her heart. I'd be saying the same thing if I had to turn the White House into a winter wunderland, to tell you the truth. Hearing her say Fuck Christmas gave me a lot more insight into that horrible REDRUM! REDRUM decor she came up with a few years ago. But hey! She married the guy.
Mr. Moon is home and he brought me some beautiful fried fish including mullet, baked beans, cole slaw, some of my potato salad, a cup of banana pudding and a piece of red velvet cake. Like three meals worth of food. And he says he's so full that he has to sit in his chair and fall asleep now.
DID YOU KNOW THAT SEASON SIX OF SHITT'S CREEK HAS DROPPED ON NETFLIX?
That's the best thing I've heard in months.
Take care, y'all. We're all living in Crazy Town and there is no limit to the number of clowns in the car.
Love...Ms. Moon
Posted by Ms. Moon at 6:44 PM