I'm Surprised It Took Me This Long To Panic 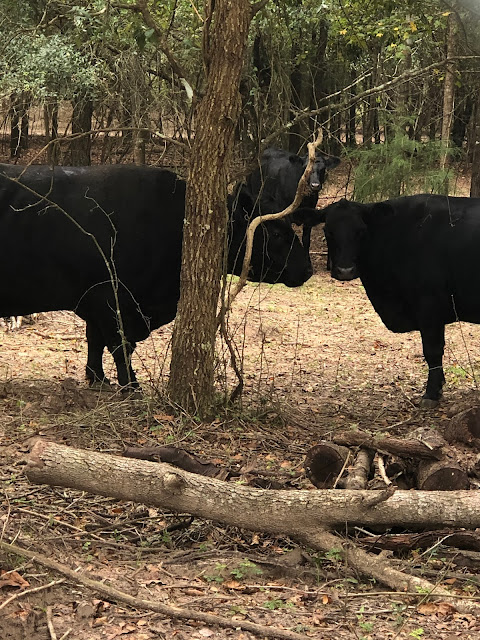 Well, there's a lousy picture of three big black cows that I took on my walk. I took the picture through a chain link fence, so there you go. Nothing else of note happened on the walk. I restuck a Biden sign back in the dirt that was laying down. The other day at the same yard I picked up a homemade "Black Lives Matter" sign that had slipped off the chair which it had been propped on and settled it back where it belonged. My goodly deeds for the days. I also took a picture of this amazing bloom today. 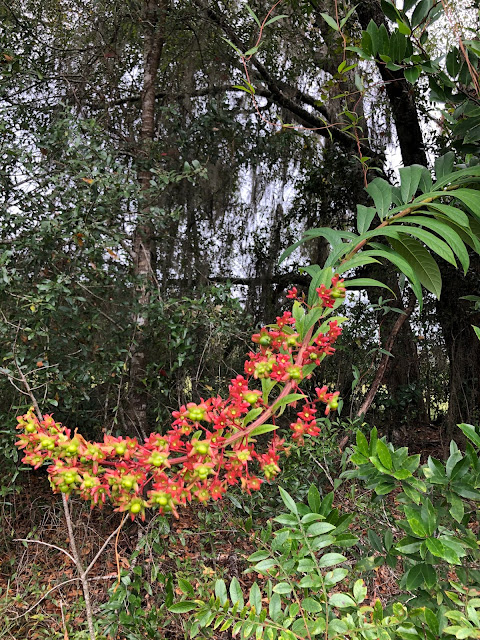 I took a picture of this same plant in bloom a few years ago and it was identified on a wildflower page on FB but I can't remember what it was. I do remember that it's horribly invasive. I tried using my PictureThis app to ID it but it gave me two answers, neither of which were correct. This was the first time that app has failed me. The little flowerlets are almost waxy. It's a gorgeous thing but I'm half afraid to pick it and bring it into my house to stick in a vase. Just my luck it would somehow escape and next thing you know I'd be fighting and despairing over it along with all of the other invasive plants growing in my yard that someone thought were a good idea to plant at one time or another.
I woke up anxious as hell today and the walk didn't help. As the day progressed, so did the anxiety. And then I got a call from my OB/GYN's office informing me that my uterus is "borderline" meaning that anything over a 5 cm lining is a problem (don't ask me why) and my uterine lining is exactly 5 cm. Which they consider something to be wary of. Here are my options:
1. Get a uterine biopsy.
I have had one of those before. No thank you.
2. Have a D&C.
WTF?
3. Wait four months and get another ultrasound.
Guess what I chose?
But because I have that completely illogical and neurotic fear surrounding medical diagnoses, this call kicked my anxiety from level orange to level DING!DING!DING!DING! RED ALERT! RED ALERT!
Next thing I knew I was weeping silently to myself and decided to take an Ativan, which I did, which helped tremendously but I haven't done a damn thing since I took it.
Well. That's not true. I did a few things. Someone made banana bread and did the laundry. I suppose it was me.
One of the things I did for sure was to book a house on St. George Island for next week. I've been wanting to go to the beach for forever. Mr. Moon and I have our 36th anniversary coming up on October 25 and we'll go spend a few days by ourselves and then Jessie and the boys are going to come join us. Vergil has to be out of town for two weeks for work and so that'll be good timing. Whether Mr. Moon can stay for the entire week I do not know. He has a lot of projects going on. But we shall see. I feel so bad that the rest of the kids probably won't be coming to stay due to Covid concerns but who knows? Maybe there can be day visits? I hope so.
The house is nothing special except for the fact that it is right on the gulf which makes it every thing I want. And not especially cheap, either, although when you think about all the lunches I have not eaten out since last March, I've probably saved more than enough money to pay for the rent.
Time to get out the old Jimmy Buffet CD's, y'all.
I think we're going to Monticello to early vote tomorrow. We have mail-in ballots but I want to make sure that every tick is tocked, every signature is witnessed. I want to get it done.
And that's life today for me. It hasn't been an easy day but I've survived. And I have something very precious to look forward to although even doing something as glorious and fun as going to the beach for a week disturbs my sense of tranquility (or, whatever semblance of tranquility I may have) as I know that my routine will be altered, the carefully crafted and constructed walls of my rut will have to be breached. I absolutely know that there will be at least one moment, and probably far more than one, when I am looking at the sea and listening to the hissing waves and I will think, "I do not want to leave here."
This is a given.
I hang on to that even as I begin worrying about the most insignificant and unimportant details one could imagine.
Here are two pictures that I love.

That was Lily the night she went to homecoming in high school. She asked me to crop out her date because he's sort of well-known in Tallahassee these days. For good things! For really good things! And isn't Lily beautiful? She was so happy to have found a plaid formal dress that she thought was cool. It had originally been longer but it hit her at an odd place and so I shortened it for her.
All the better to see her ultra-hip fishnet stockings. Am I right?
And the last picture. 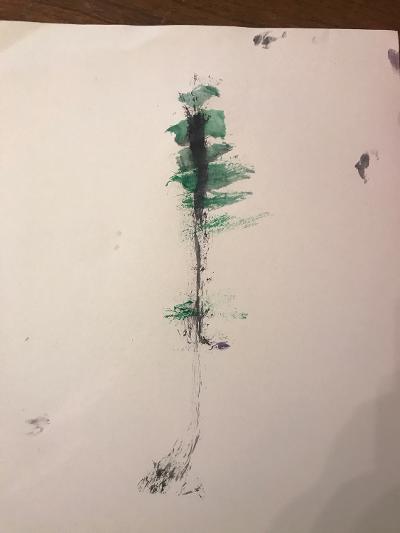 I just can't tell you how much I love this. Magnolia was assigned the task of drawing or painting a tree for school and this is what she painted. Does it not remind you of a Chinese watercolor? I think it is exceptional and lovely and graceful and I think it should be framed.
I had a friend who played guitar amazingly well and as he said, "It's not the notes you play, it's the notes you don't play."
I think that most art is like this. And if that is indeed true, Ms. Maggie is well on her way to being an artist. At the age of not-quite five.
Love...Ms. Moon
Posted by Ms. Moon at 6:34 PM