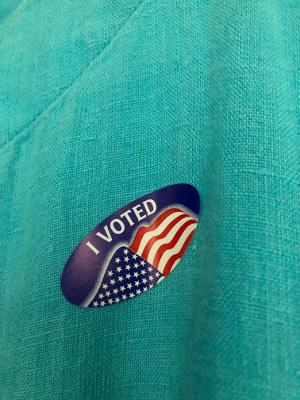 Woke up this morning from one of my house dreams but this one wasn't so bad. There was as much laundry to do as there usually is but somehow I didn't feel quite the time constraints as there normally are- the frantic rush to get a Sisyphean task completed in a few hours. And I had time to actually go through some of the beautiful things that had been left behind in the old house. A jewelry box with silk fans, embroidered with roses. silver pendents, lovely shoes left just where the former occupant of a room had left them. A beautiful straw bag that obviously been a souvenir from a tropical cruise, the straw as tightly woven and soft as it could be.

I am not sure at all where I think these people have gone in my dreaming house but everything is so old that whenever it was, it was long, long ago.

Still, even though the dream was not so bad and in fact, lovely in places, I was overtaken by anxiety as soon as my feet hit the floor. It's just so impossible to describe and in fact, when I'm not feeling it, it's impossible to quite remember, exactly as they claim the pain of childbirth is. Of course you can't remember exactly how pain feels. The sensation of it. But you by god can remember that it was something you'd not be too happy to go through again.
Same with anxiety, I guess.

But what can you do? One can't just start popping Ativan like candy.
Wouldn't be prudent.

So, despite the anxiety I got in the car with my husband and we drove to Monticello to go to the Supervisor of Elections to early vote and we got 'er done. There was no line but there were quite a few people there. I have no idea how my county is going to go this year. Twice we voted in Obama but then Trump took it big in 2016. There were about a hundred Trump signs on the way to Monticello which was horribly discouraging but that road has a whole lot of rich-ish white people living on it who like to pretend that they live on plantations. And we two democrats did our part.

After we voted we went to the Winn Dixie as we were out of things like milk and beer and that was not a pleasant experience. Monticello has no Publix, of course. Not big enough. And for awhile there, the Winn Dixie had spruced up and was a nicer place than it had been but it's slid right back down again. As in- I would not buy meat or seafood there. And wouldn't you know that about a third of the customers were not wearing masks? Jefferson County does not have a mask ordinance and although I saw several signs asking people to wear masks while shopping, it was obvious that some people just weren't having it. So I got out of there as quickly as I could.

And then Jessie came out to return something to her daddy so we got to visit for a little while. The boys ran for their Boppy, of course. I swear- it's like I'm not even here if he's here, which in a way, I love. It's so precious to me to see their mutual bond. And I know they love me just as I am beyond any doubt that they know that I love them. And after they spent some time together raking, 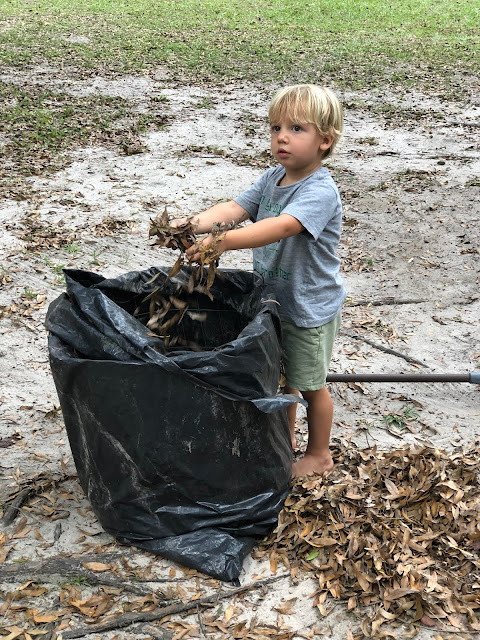 which the boys love to do for some reason and he left to go set a fence post at Lily's, they both ran to the library and asked for books. So of course I read to them, mostly Dr. Seuss today which is probably the most fun to read because of the rhymes and rhythms. Jessie and I told the boys about going to the beach which did not seem to excite either one of them a great deal. I showed them pictures from the rental site and they were interested in which bedroom would be theirs but beyond that, there wasn't too much of a reaction. Those boys are be-here-now gurus already in life and hearing about a future trip to the beach is just not nearly as exciting as the possibility of helping Boppy rake RIGHT THIS SECOND. I could learn a lot from them. And actually, I do.

And after they left, the actual nurse from the doctor's office called me and told me that the problem was not enough progesterone in my compounded hormones and that they'd be changing my prescription. That's what I figured- an imbalance and that's actually why the doctor wanted the ultrasound- to make sure that I was getting the right balance. I told her that I'd already scheduled a follow-up ultra-sound appointment for next February and she said, "Great!" and that was that.

So I feel better now and calmer. I do so wish that this Gee Dee Blogger would let me align left but it refuses to after I centered pictures so there you go. That's not very much of a problem in reality. But it is rather weird. I'm not writing poetry here.

And look! All of a sudden the words are going where they're supposed to go. Still won't let me correct what's already here though.

I know you will or already have but hey, people- VOTE! For the sake of life on earth and my own personal mental health- please. Vote.