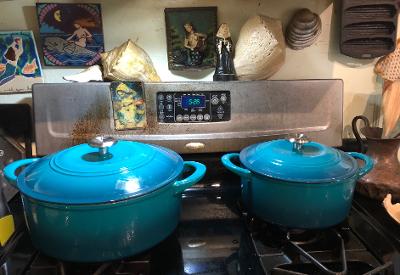 I am so very glad I bought those dutch ovens. I honestly didn't think I would be using the large one. That is a big ass pot. But I've used it twice now and both times have appreciated the width of it. Circumference? Diameter?
Whatever.
When I made jam in it, it provided a larger area exposed to the heat which helped the jam thicken faster as it boiled. And I used it Friday night to make chicken and dumplings and again, I had far more area in which to cook my dumplings and the more dumplings in the pot, the better. I've used the smaller one so many times already. Tonight, chili is simmering in it. It's such a good size for many of the meals I cook. And here's something else I've realized- the knobs on the lids are better and sturdier than the ones on the Le Crueset. I wish I hadn't had to discover this because the way I did was to accidentally (of course) drop the lid of one of those pans and damn if the metal knob wasn't made in two pieces and split almost in two leaving a very sharp edge on which I promptly cut my finger. The knobs on the "cheap" stuff, however, are all once piece. I checked after I broke the other one.
Harumph.
Luckily I can order a new knob from Le Creuset but of course it's going to probably cost at least $25 with shipping.
Again- harumph.

God I've been useless today.
No. Really.
The most exciting thing I did was to pot up a few rootlings. 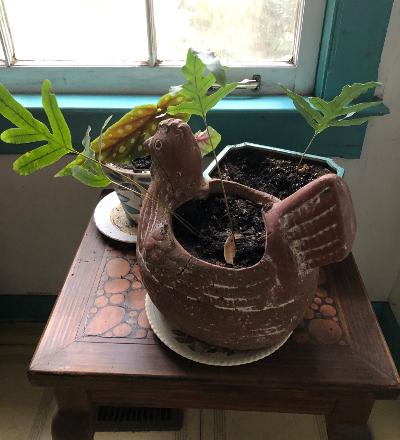 The inspiration for this came with a new old pot. New to me. It was in the car that Mr. Moon bought and was detailing the other day. The lady had taken everything she wanted out of the car so I felt like it was okay to use. I mean, it's just a regular, used planter pot. 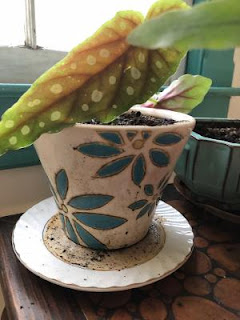 But it's pretty cool in a "modern" sort of way and was a good size for a starter home for the polka dot begonia stems I'd rooted. I'll give it to one of the kids. Repotting and potting plants always seems like a game of musical chairs to me. Or one of those shell exchange fests that hermit crabs have. If you've never heard of this or seen footage of it happening, I suggest you give over four minutes of your life to check it out HERE which comes courtesy of BBC Earth. But anyway, plants, like hermit crabs, do outgrow their homes and must be put into bigger pots while their outgrown pots can be used for smaller plants that need bigger homes right down to the ones that suit the babies.
Before you know it, you've changed the entire plant arrangement of your life and new plants, which need the most careful tending, have to be someplace where you will remember to water them regularly while rooting is established and so forth. That little table in my mud/laundry room is where I keep my most fragile rootlings and the kitchen porch is sort of the step-up nursery and by the time I was done today, everything had been rearranged. To add to the fun, any of the plants on the little porch that the chickens might enjoy pecking at must be elevated, otherwise, they'll be pruned down to the nubs. The birds seem to especially like begonias.
AND WHO CARES?
Well, I do. Sort of.
But that's the level of activity I did today.
Speaking of birds nibbling plants, yesterday while the boys were here, we saw Miss Tweety in the garden. Since Mr. Moon did his chicken-proofing, we had not seen one hen or rooster in there but suddenly- there was the tiniest chicken of all having her way with the dirt and plants. Turns out there was a hole in the fence that Mr. Moon and the boys fixed. Here's Levon, cutting the wire to get the job done. 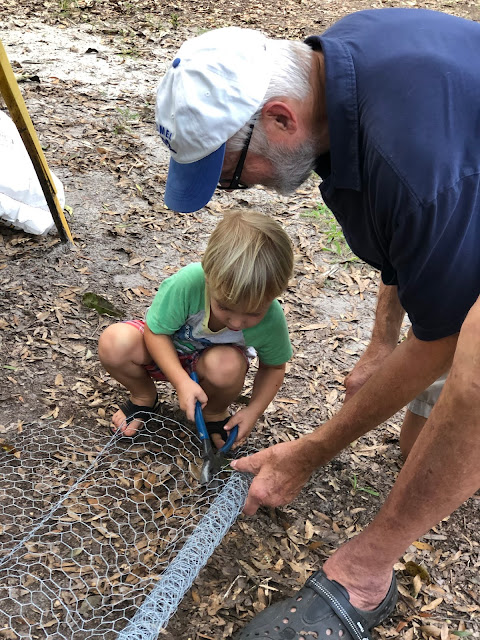 I love that picture.
So. Chili's cooking, my man is out doing yet another manly activity and I'm just...here. Sunday. A thing happened yesterday that I've been thinking about and trying to process. August and I were reading The Five Hundred Hats of Bartholomew Cubbins which is a very good story and in which we were both totally invested when there was a part about someone getting a spanking. August laughed and laughed.
"Have you ever gotten a spanking?" I asked him.
He looked at me like I was insane.
"No," he said.
"I did," I said. And we went on but suddenly I remembered the last spanking I got. I had to have been at least fifteen, maybe sixteen, and my family had been on a camping trip attended by a lot of the teachers at the community college where my stepfather worked. There had been a boy there, one I knew well from school, and that weekend we sort of had our eyes on each other. It was completely innocent. Not so much as a hand-holding but my stepfather noticed. I realize now that he thought I was his and his alone and he couldn't say anything because that would have been too weird. But when we got home, I had to go to the bathroom, and I did, and I took the comics out of the Sunday paper with me and when I got out he yelled at me for avoiding the work of unpacking and not "helping your mother." This was something he lambasted me for frequently. I can remember him getting angry with me for not helping my mother bathe my little brothers and thinking, "Why don't you do it? They're your kids?" As far as I know, he never so much as changed one of their shirts, must less a diaper. And he certainly never bathed them. If Mother couldn't do these things, I did them.
But on this occasion, he was so angry that he actually hit my butt a couple of times. I was so shamed and humiliated. And I had no idea why he had gotten so worked up about me going to the bathroom when of course, he was just looking for an excuse to punish me for something that was as sweet and as natural as anything in this world could be.
When this memory hit me, I stumbled over my words as I was reading the Dr. Seuss book and had to pull myself together to continue. For some reason, it had never really crossed my mind how completely fucked up and weird and truly perverted that had been. I cannot remember if my mother witnessed this but I have the sense that she did. Did she say anything? Again- I don't remember. I don't know.
But I don't think he ever hit me again although that was certainly not the last time he shamed me, humiliated me, made me feel dirty and guilty.
Oh. The layers of the stinking, rotten onion we know as sexual abuse.
I will tell you that that boy ended up being the first boy I ever held hands with and that memory is as sweet as he was. Nothing can spoil that. I still dream of him sometimes. I hope he is still with us, as bright-souled as he was then.
Back to the present.
Love...Ms. Moon