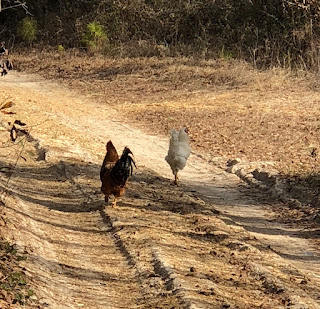 A few days ago on my walk I saw two roosters, companionably scratching by a church that I pass on my route and today I saw them again on the road that leads to the horse farm. I am thinking that someone had the same problem I did and just dumped their roosters off like unwanted puppies but unlike unwanted puppies, these roosters seem to be pretty self-reliant and okay with the situation although they haven't actually talked to me about it.
They do add a tiny frisson of excitement to my walk because, well, there are just so many reasons, the main one being that I have walked this route ten thousand times and anything new is exciting. Plus- roosters! Not to mention that I am so easily entertained.

I talked to Shelly today as she was out raking her yard. She asked if I thought the groundhog would see its shadow.
"The groundhog ALWAYS sees it's shadow," I said.
Then she gave me the low-down on some of the things going on in Lloyd, mostly about the road which all of us take to get to Monticello which is now closed to replace a bridge and it may be closed for a year.
A YEAR?! Really?
And the detour adds anywhere from five to twenty miles, depending on where you're going. I mean, this is truly a pain in the ass and is going to affect all of us one way or another.
We shook our heads and said, "Well, what're you gonna do?"

Mr. Moon stayed with August for a little while today and from the video and pictures I got, it would appear that they had a great time. August wanted his Boppy to draw him another farm, and so his Boppy did. 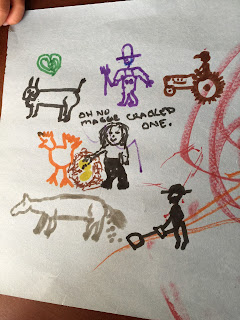 As you can see, August wanted his grandfather to draw a rendering of Maggie dropping an egg as she did on Sunday. I especially like the guy on the tractor and of course, the eternal theme of an animal pooping and a farmer having to clean it up is presented here as well.

So. When Mr. Moon got home from work, I'd set out the B-12 vial, alcohol, cotton pad, and a syringe.
"You ready to shoot me?" he asked.
It went perfectly fine and well. He said it didn't hurt a bit. I will admit that it took some courage to stab him. One down, eighty-nine to go.
Right now he's under his bathroom, doing things with pipes which cause rattling and banging. Every now and then I have to check on him when the bangs get alarming.
"You okay?" I yell at him through the floor.
"I'm fine!" he yells back.
I do believe he's having the time of his life.

And I finished up the curtains for August's room today. I enjoyed that, as I always enjoy doing these simple, mostly mindless things with fabric and thread and my beloved old Singer while listening to a book on my phone. I'm still listening to the Outlander series. I'm on book three and feel quite comforted in knowing that there are six more to go. I do worry a little bit about what I'll do when I'm finished with them but that probably won't happen for another lifetime or two.
These books are LONG.

And so it goes. Pinto beans for supper. My favorite.

I am a peasant. Let's face it. Chickens and beans and dirt and thread and needles make me happy.
Oh. Well, not necessarily the syringe sort of needles but I can deal with that too, especially if it helps to make my husband better.