I have no pictures today. Nope, none.
I was too busy being all housewifey and shit. I won't even go into what all I did today but I will say that I also did some outdoor work picking up branches that fell in our little storm yesterday and cleaned the hen house and put the poopy hay on the garden. I know you're supposed to compost chicken shit. It's too "hot" when it's fresh but if I try to do that, I never get it to the garden so it can just compost itself right there between the rows of collards and arugula.
AND I took a fairly decent walk.
So. I am virtuous. Obviously.
A virtuous housewife who should be wearing a mob cap and girdle...or something other than overalls but I am, in fact, wearing overalls and I'm betting no one is surprised. Overalls are the absolute best all-purpose garment for indoor and outdoor labor. The pockets alone make them so. Big enough to hold eggs and also phones for listening to books on, to collect things in that need to go somewhere else as one tidies up, and it is the garment most apt to have plenty of free-ranging room to allow for comfort and ease of wear. Plus, if you get them dirty, who cares? They're supposed to be dirty! They are the uniform of the worker! Mao had it wrong. Old MacDonald had it right.
So says Ms. Moon.

All of this adds up to me being tired but that's okay. I love sleeping so much that it's almost a crime. Also, I love getting into bed and reading. If there is a more luxurious activity, I can't afford it. Right now I'm reading a book that's hooked me for sure. I almost put it down early on because it might be called "triggering" but I just had to see what was going to happen and I'm about halfway through it and I still want to know what's going to happen. Here's the book. 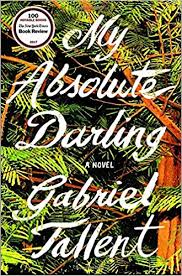 NPR's review of it (which I am not going to read because it might leak something I don't want to know until I get to that point in the book) is titled, 'My Absolute Darling' Is Hard To Read, Harder To Put Down.
So far, at least, I am finding this to be utterly true.
Have any of y'all read it?
I'll let you know what I think about it when I finish it. One never knows- just because a book starts out by grabbing you, it doesn't mean that it will end in a way that makes that worthwhile.

I can report that Owen is a little better and that Maggie is now running a fever.
Poor Lily and poor children. Gibson will be next, of course. I am planning on going over and getting Owen tomorrow and bringing him here and letting him be cozy on my couch for a change of scenery. If he wants to, that is. He may not want to leave his mom. I hope he does want to because I welcome the chance to give him some extra love, attention and care, even if it's because he's sick. He is still my baby and the opportunity to baby him is rare. And if I know Maggie, she's going to want to spend the day cuddling her mama.
Lord help us when the parents get sick too. Goddam viruses. I swear, I learned more about viruses from reading And The Band Played On by Randy Shilts than I did in nursing school and what I learned is that they are incredibly adaptable, wily, and opportunistic and yes, that's anthropomorphic thinking but I still believe it.

Time for me to quit dilly-dallying here. There is more housewifey stuff to be done. As there always, always is but what a pleasure to have a house that smells a bit like white vinegar and Fabuloso, delicious leftovers and Scott's Liquid Gold.
The housewife's bouquet of delight.