Okay. Let's cut to the chase. Chicken and yellow rice and artichokes and salad. 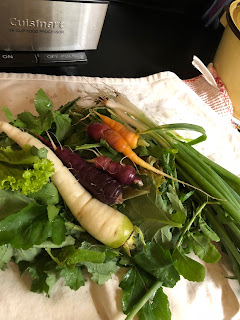 There's the salad, not yet constructed.
Oh god, but I am going to miss these fresh, aromatic, beautiful greens. I am already grieving.
The chicken and yellow rice are in the oven. I sauteed the onions and red peppers and celery in some olive oil in my wonderful cast iron sauce pan and then added the water and rice mix and let it cook for a little while and then added sliced young shallots with their lovely green tops, some leftover green beans that I'd cooked with sun-dried tomatoes and almonds and more shallots, and some sliced green olives.
While that was cooking, I browned the cut-up skinless, boneless chicken breasts in my beloved largest skillet which, in the 1960's and early '70's was what my patrol in Girl Scouts cooked in over the campfire.
Uh-huh.
I seasoned the chicken with salt and pepper and garlic powder and lime-chili and smoked paprika. When they were all lovely and colorful and brown and smelled like heaven, I put the rice mixture in the bottom of one of my thrift store Corning Ware baking dishes that has a lid on it and put the chicken on top. I put a little water in the pan I cooked the chicken in, scraping up some of the bits and added that to the whole thing. I put a lid on it, and now it's cooking in the oven at 375 degrees. I hope with all of my heart that it's as delicious as I fantasized it would be.
The artichokes are cooking in a little water with lemon juice and salt.
And I will make the salad in a few moments.

I love to cook.

Another day where I got nothing done that I had planned to get done. Well, I took my walk and then Jessie and the boys came out (Lily had to work- damn those bills and the need to eat!) and we went to Monticello and had lunch. 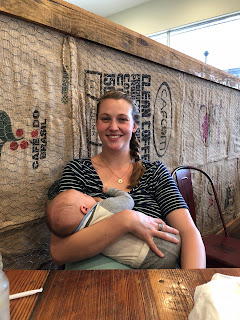 Look at what an armful that child has become!

Then we went to the animal shelter thrift store where we spent at least an hour wandering about and got some children's books and August pajama bottoms and I-don't-even-remember stuff and at one point August said, "Look at all the toys!" and the volunteer ladies who worked there complimented the boy on his vocabulary and his general gorgeousness 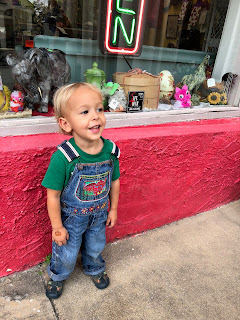 and by the time we got back to Mer's house, it was four o'clock in the afternoon.
And we still had to read a few books. When August takes my hand and says, "Come Mer," and then, "Read books," well...the laundry and kitchen and unmade bed can all go to hell.
Levon loves to sit in his mama's lap while I read to August. He tries to grab the books and I watch his face and he is absolutely looking at the pictures and following along as best as a three and a half month old baby can. He loves his brother so much. When August pretends to chew on Levon's feet, Levon laughs and cackles and can hardly contain himself.
Babies just love babies which is a good thing or the human race would have died out long ago.
Trust me.

And then they left and then Mr. Moon got home and here we are, supper cooking and no laundry done and my bathroom still a scene of chaos and disorganization and there is always tomorrow.

When we were driving home, August asked me to take his picture in the car. I had to twist around in a way not exactly easy for a sexogenarian (is that a word?) but I did it and here is the picture I got. 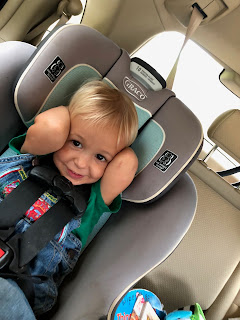 "See it," he demanded and I showed it to him.
"Are you cute?" I asked.
"Yes," he said.
Which is the same thing he said when I asked him if he knew that his Boppy and his Mer loved him.

He doesn't waste words. He doesn't subscribe to false humility.

He is, as are all of my grandchildren, a stellar human being.

P.S. More of those stellar human beings, getting ready for bed: 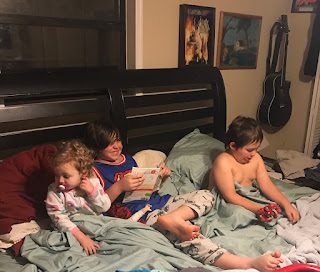 Owen is reading Amelia Bedelia to his brother and sister.
This is family. This is what love is.