A Day Of Resting

Well, if yesterday I was a housewifeing dynamo, today I was a laid-back, relaxed grandmother who spent a good part of the day sitting on the couch with my curled up grandson, reading my book while he watched TV. 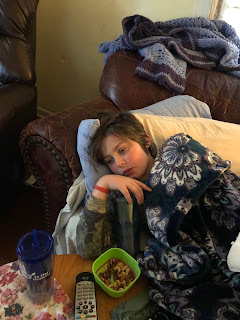 As you can tell, that boy has really been sick. And he's still not out of the woods, obviously. His fever is not nearly as bad as it has been and he did stay awake, mostly, watching Skylanders which I know nothing about except that some pretty famous actors do voices on it.
Susan Sarandon, for example. Whom I used to adore but since she got so vile about Hillary, I'm over it.
She's still a good actor, though and I will never give up my love of Bull Durham.

Owen wanted a smoothie when he got here and so I made him one and he drank most of that. And he wanted cheese toast and he ate two pieces except for the crust which the chickens appreciated. And yes, I let him drink a Dr. Pepper which has been lurking in the back of the refrigerator since our friend Anna house sat for us last summer. And then he ate a few nuts, so I would say that he is on the path to recovery.
I kept asking him if he'd like anything or if I could do anything for him and he kept saying, "No thank-you, not now," but not in a pitiful way.

So I sat and finished My Absolute Darling which certainly did not lose any momentum in the last half. Not at all. And I can certainly see how this book could become a movie, albeit one almost as hard to watch as the book was to read.
I really do not know how to describe it nor do I know whether to recommend it.
I think the writing was very, very good and it engaged me in a way that no book has engaged me in a long time. There is quite a lot of violence in it as well as incest. More about guns than you'll ever need to know.
Doesn't really sound like a book I'd choose to read, does it? And honestly, if I'd known all of that, I probably never would have picked it up at the library.
And yet.
It was incredibly compelling.
I mostly chose it because of the title, which I love, and because the author's picture was so sweet and because it said that he was raised by two mothers.
Which adds an interesting slant to the book in some ways, although there were definitely not two partnered mothers to be found in the book anywhere.
But despite the subject matter which the author approached and wrote about with absolute steel-like clarity and despite a climactic scene which was a little too cinematic, it was a book that I will not soon be forgetting, either in story or in character.
And that's what I have to say about that.
I'm glad I read it and I would not be surprised if I didn't read it again sometime. It gave me so much to think about that I believe a second reading would be worthwhile.

And here I go, off to put the chickens to bed and to make clam spaghetti. I noticed today that the arugula is starting to bolt which is a sad thing but I plan to use up as much of it as I possibly can before it goes to seed. Mr. Moon's been working on his bathroom since early afternoon and is still going at it. The smell of sawdust perfumes that end of the house and I love it. It reminds me of my grandfather who was so frequently in his garage wood shop, building and repairing things, sawing and nailing and glueing and shellacking.
And by golly, he still had room in that little garage to park his Rambler in it.
Granddaddy was a firm believer in keeping things simple and very, very tidy.

I wish I had more of that in me.