Another Lunch, Another Chance To Love Each Other 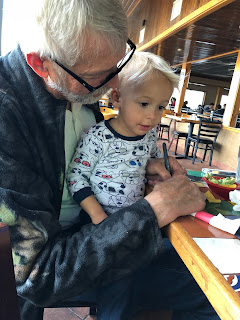 Today was go-to-El-Patron-for-lunch day. It's been quite awhile since we'd all been and enjoyed the extremely reasonably priced and very tasty luncheon offerings. It was a little too windy and chilly to sit on the deck and so they gave us the big table in the back which offers a bit of distance between us with our babies and crazy kidlings and the rest of the restaurant.
August sat on Boppy's lap, of course, and wanted more farm pictures. Maggie came and sat on my lap and I kept burying my nose in her curls, sniffing up that gorgeous warm child smell that always reminds me of the parakeet I had as a pet when I was a child. Miss Pretty Girl was her name, or Pretty, for short. August kept passing Maggie chips and he even pushed the salsa dish over closer to her so it would be easier for her to reach and she always said, "Tant-tu," so sweetly. It's lovely watching these two littles beginning to really notice each other and interacting on this level. Later, they were wild childs and ran around and around the table, chasing each other and laughing uproariously.
When we got our food, Maggie shared my beans and rice, thanking me after every bite I gave her, and her mama gave her some grilled onions and chicken from her fajitas and the girl carefully ate all of the onions while leaving most of the chicken. She also ate some avocado chunks from the guacamole and August had basically the same lunch.
Levon had milk.
And then a nap.
He's such a baby.
Such a beautiful baby.
It was good to see Hank and catch up on stuff.

And August even came to sit on my lap for a little while. He wanted me to draw him pictures too but for some unknown reason (haha!) my pictures aren't very interesting so he asked to see pictures on my phone which I gladly let him do so that I could bury my nose in HIS hair which is so different than Maggie's. Soft, yes, but sort of crazy. Lily is hoping beyond hope that he has Uncombable Hair Syndrome which is a real and true thing and which one of the grandchildren of Mr. Moon's sister has. I have no idea if he has it but his head smells just as wonderful as Maggie's and I probably annoyed him with my sniffing of his personal scalp. I just can't help it. I absolutely must do it. It's been scientifically proven. I swear. 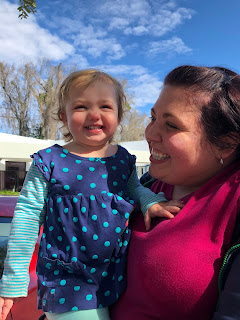 When August and Maggie were running around the table today, I scootched over a chair to sit next to my husband and I put my head on his chest and he put his arms around me and kissed me and we snuggled a little bit, right there in El Patron. There is something just so incredibly precious about the way I love the man who shares this family with me. We don't even have to say a thing. It's just so obvious that we are so lucky and we are also so lucky because not only was it our love that made this family what it is, but that we still have that love and it has been multiplied over and over again.
The kids all sort of went, "Arggghhh! Mom and Dad are kissing!" but I know they don't mind. I don't care if you're four years old or forty years old- if Mom and Dad are kissing, there is something very right with your world.