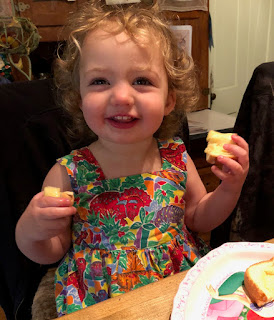 Maggie and Owen got to come over to my house this morning for some Mer time because Lily had to work and Jason was doing his parental duty by going on a field trip with Gibson's class to the Jr. Museum. When they arrived, Owen went straight to the couch where I'd already tucked in a sheet and arranged the pillows, laid down and pulled up the very soft blanket. That poor boy. He is still sick and slept for almost four hours today. He did want some cheese toast, just like yesterday, and I made some and he said he wanted some smoothie but he hardly drank a bit of it. Every time I'd wake him and ask if he wanted anything or if he wouldn't please have a few sips of Gator Aid, he'd say, "Not now, Mer. Thank-you," and turn over and be right back in what he later referred to as his "magic sleep world."

However, if Ms. Magnolia June had the same thing as Owen, she certainly got over it quickly. The picture above is what she looked like eating her own cheese toast. I have never met a human being in my life whose face reflected joy the way Maggie's does. Sitting in Mer's kitchen, eating cheese toast and having a chat with her grandmother is obviously about the most fun she can possibly imagine.

It was another easy, restful day. Maggie is what I call a "project child." Give her something that interests her and she's good for a long while. 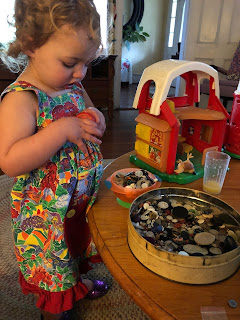 I let her play with my button tin and she was happy for at least forty-five minutes. Occasionally she'd drop some of the buttons and say, "Uh-oh," and I'd help her pick them up and she'd say, "Thank-you, Mer," and my heart just about exploded.

We read some books and we went outside to look for eggs and she wanted to swing and to go down the slide. 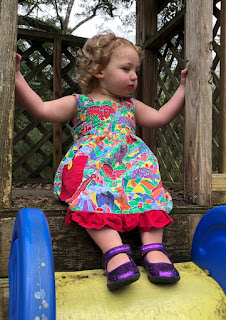 And yes, those are purple glitter shoes and yes, she does love them.

It's so odd and so wonderful to have this one baby girl grandchild. I don't think I treat her any differently than I did my grandsons but who knows? I know for sure that she's as brave and daring as any of the boys and I do not discourage that. Why would I? But she honestly cares more about what she wears than her brothers ever did and that's just the truth.
She's also more interested in baby dolls which have been here for all of the grandchildren.
I guess I just have to say that with each of them, there are differences and there are similarities and I cherish all of it and love them each and every one exactly for who they are.

When Maggie and I were on the back porch, Miss Camellia came in to make a visit which disturbed Maggie a bit and when you think about it, a full-grown hen is almost half as tall as a toddler which might well be a bit scary. Here's a picture I took of tiny Miss Violet on the roost tonight. 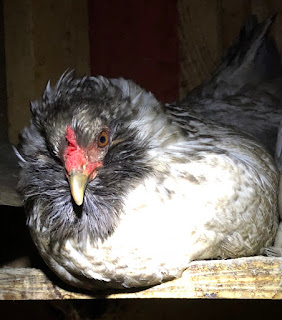 Is that not a dinosaur?
I believe it is.
But I showed Maggie how Camellia would eat cat food out of my hand and said, "See? She doesn't hurt me," and after that, Maggie was not so worried. To tell you the truth, children around here have a lot more to fear from Maurice than than they do the small dinosaurs.

While I was watching Owen and Magnolia, Mr. Moon was over at Jessie's house, watching August while Jessie went to the doctor. We kept trading pictures. 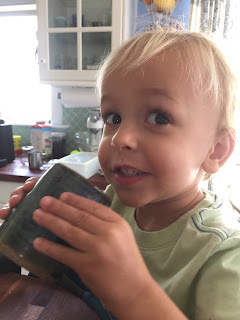 And so the day was like that- Mr. Moon and I fulfilling our human-species-evolved grandparenting destinies by trying to do whatever we need to do to make our children's life a little easier and loving on our grandchildren so that they will grow up to be happier and healthier adults.
Or something like that.
I believe that what we call love is not only the energy source that runs the universe but is the energy source that runs us as well.
And there are a lot of different types of love but the love of grandchildren is one of the most fun. And if the need for a nap after experiencing it is any indication of its strength, then it's powerful as hell.

At least that's what I think.