It was a crazy morning. I slept so hard that when Gibson came into our room at 7:30 this morning and woke us up, I had to take a second to remember why he was there. His grandfather got up but I decided to stay in bed a little longer to try and get a few more minutes of sleep. Gibson decided to stay with me. Unfortunately, his allergies are terrible right now and he's doing a very special sort of breathing that requires a lot of nasal action and he also coughs. Plus, he was playing with some toy. Let us not forget he was leaning his head on me.
"Gibson," I finally said. "Go find your Boppy."
He took off and came back a few seconds later.
"I can't find him anywhere, Mer! He's not in this house!"
"He's probably gone to get the paper," I said, which Gibson took as an excuse to start an entire conversation about mailboxes and paper boxes and so forth.
"Gibson!" I finally said again. "I'm sure he's back now. Go find him."
And he did and I slept for at least another fifteen minutes.
I knew I had to get the boys to a local park by 10:15 for baseball games and so I hurried to get breakfast ready. Boppy tried to convince Gibson that a nice bowl of Honey Nut Cheerios with cut-up bananas would be a superior breakfast.
"Ha!" Gibson snorted. "I don't think so."
They got waffles and bacon.
Because of course.

We finally got breakfast eaten and the boys went to get their baseball duds on. Vergil and August showed up to help Mr. Moon with bathroom building just as I had to leave to take the boys. They piled into the car and we met their mom at the park.
Here's what my guys look like in their uniforms. 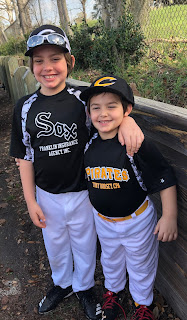 I hot-footed it back to the house, passing as I drove, a man I see walking almost every time I drive on that road. He wears jeans and a long-sleeved plaid shirt no matter the weather, and a big hat and he walks like he's having the worst time of his life. He has a sort of floppy gait and yet he is so obviously determined. I would love to know the story there. He never waves and never looks up to be waved at. He just plods on, each of his steps a seemingly barely controlled fall.
He and I are this area's most faithful walkers and he is more faithful than I am and let me just say that I would not like to read what anyone might have to say about the way I look when I walk.

By the time I got back to the house, Jessie and Levon were here. I had noted an announcement on one of the many, many church signs I pass on my way to and from town, that there was to be a fish fry in Lloyd. Jessie had seen the actual event taking place and said, "Let's go get some!" and I was very happy to comply. I hadn't made enough waffles and so I got the waffled dregs of what had been left in the batter bowl and I was still hungry. Jessie put Levon in the stroller and I took August's hand and we went down and ordered three fried mullet lunches. Mr. Moon said he was still full from breakfast. We chatted with the church ladies for a bit and then we went to the post office where August told the Post Mistress that he was twenty she she asked how old he was.
"Small for his age," I told her.
By the time we got back to the fish fry place, our lunches were ready to go.
We were mighty excited. We brought them home and set out hot sauce and forks and napkins and Virgil joined us and the dinners did not disappoint. 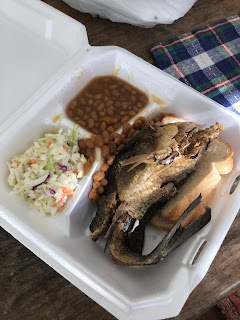 We had been offered either white or wheat bread and Jessie said, without hesitation, "White!"
Oh hell yes.
If you're going to eat fried mullet and beans and coleslaw and there's Wonder Bread to be had, you best get some. That mullet couldn't have been more than hours out of the water and it was fried just lovely. The beans were tasty as beans can be and the cole slaw was that perfect kind which is vinegary and sweet and I've never been able to make it like that in my life.
Oh, but it was good!

After lunch Jessie and I played with the babies and walked around outside and picked greens and carrots and got very sleepy because it's hot and we'd eaten mullet and Jessie didn't get enough sleep last night. 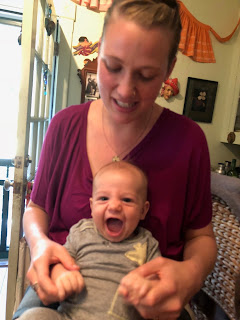 Levon was pretty happy.
We read about a million books. The library looked like a book mobile had exploded in it. 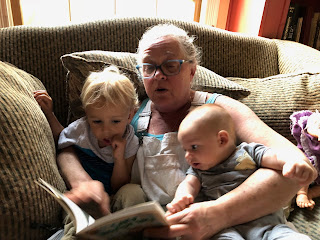 Levon is already honestly interested in the books.
Here's another Levon fun fact- he can chew on his toes now. I am telling you- that kid is brilliant!

Vergil wrapped up his part of the day's work here and he and August left for home and Jessie and Levon left to go to a baby shower.
I took a nap.
When I got up, I found this text. 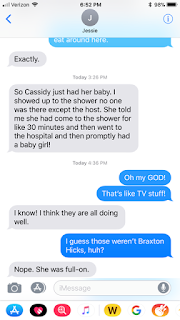 The mama had her baby before the shower was over!
Way to get it done!

I also found a note from my husband when I woke up telling me he'd gone to Lowe's. About half an hour ago I texted him and asked if he was okay.
"I'm at Home Depot," he texted back.
He's still not home.
I've swept floors, cleaned up the kitchen, run two loads of clothes, tidied up the library, put the chickens up, written this and done some other stuff.
Should I worry?

WAIT! Just as I wrote that, he came home.
"Lord, honey," I said. "I was about to call out the Mounties."
"I know," he said. "I spent the last half hour down at the corner helping a little girl whose car had overheated."
That's my fella.

I gave him a kiss and made him lean over the kitchen counter so I could give him his B-12 and then I kissed him again.

As August would say, it's been a pretty good day.