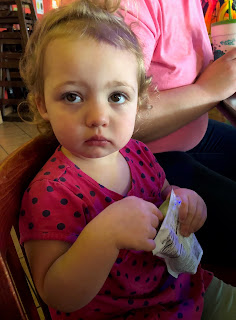 There's Ms. Magnolia June with a somber face. She wasn't sad, truthfully. She just had a second of not smiling. This was at lunch which was just Lily and Maggie and me before Mr. Moon got there to go help us jump the battery on Lily's car which is not dead yet but is leaning ever more closely over the grave. I was going to give her a jump start but when we opened the hood of the Prius, we had no idea where the battery was and in fact, weren't sure there even was one and if there was, could it be used to give a jump to another car?

The funny thing was that just a few spaces over in the parking lot of the Dollar Tree, which is where Lily's car was, another woman tried to start her car and realized she had a dead battery too! She, however, had a Lexus. She was all about me giving her a jump but I finally said, "No. We are NOT doing that," and luckily, a young good ol' boy in a roof and gutter repair shirt used his Mercedes to start the woman's battery.
All of this, I repeat, in front of the Dollar Tree.

So that was all pretty exciting but in the end, Mr. Moon did indeed get Lily's car started and she could get to the bus stop in time to pick up Owen and Gibson who both went to school today to Lily's great relief. Then I went on to spend approximately four days in Costco and four months in Publix in order to restock my refrigerator which was getting pretty bare.

And that was my day. I did take a very good walk this gray, misty morning and I saw the two feral woods roosters which made me happy. The little purple violets are starting to bloom which also cheered me.

I tell you what's not making me happy- these damn frogs! They are so loud and so shrill that my eardrums feel in danger of suffering permanent damage. 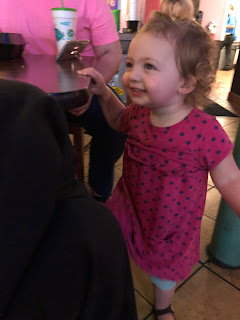 And there's Maggie grinning at her Boppy because she was pretending that his foot was an accelerator and every time she stomped it, he made a car-starting noise.
She is such a cherub. A hugging, kissing, patting-your-back cherub.
And she, like August, is beginning to really sing songs. They both have excellent abilities to sing in tune. The words are a little harder, but they're working on it.

And Levon can now roll front-to-back and back-to-front which babies are not supposed to be able to do until they are five or six months old.
He has just turned three months old.

Lord, I have brilliant grandchildren.

But you knew that.