A Sunday Wherein Vergil Helps Mr. Moon And I Get Time With My Grands And There Is Much Giggling Going On

Water is dripping off the leaves and playing itself out on the ground and the frogs are whistling, chirping, vying for attention and talking about the lovely rain we've had today. It is warmer than it's been in quite awhile and mist is rising up in the gloaming. In fact, it looks to me like the perfect definition of the gloaming this evening, as vaporous as a set for the witches' scene in Macbeth.

We've spent the day with Jessie and Vergil and August and Levon as Vergil wanted to come over and help Mr. Moon with the wiring of the new bathroom. We started out with biscuits and eggs whose yolks were as yellow as marigolds scrambled with kale from the garden and onions and peppers and tomatoes and there was sausage and bacon and salsa and hot sauce and butter and orange marmalade and blackberry jam and then the men went to work and Jessie and I hung out with the children. 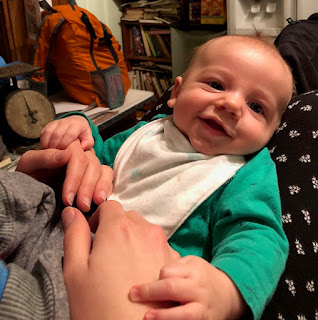 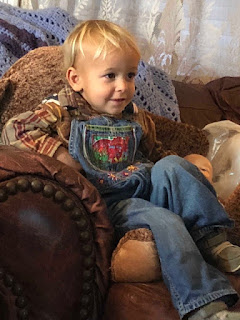 We let August watch a tiny bit of "real" TV and he was so happy. Bubble Guppies and Mickey's Playhouse. He's wearing the overalls that I decorated for him and Jessie said that he told her this morning that he wanted to wear the "cute" overalls.
Cute overalls for a very cute boy.

It was a simple day. Reading books, feeding goats, gathering eggs, playing with toys, rocking Levon, having snacks, Jessie and I making each other laugh.

Do you remember last spring's Dearie who turned out to be a rooster and and ended up living next door to escape the rooster-glut hell over here?
Well, this is what he looks like now and I have to say, he is one fine looking rooster. 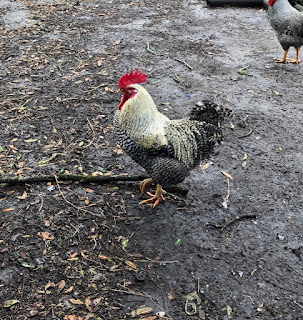 Look at how fancy that guy is!
And obviously smart, too, because if he hadn't moved, he'd be dead along with Joe Cocker and Little Richard.

August got to sit on Mr. Moon's newly restored Cushman Husky.
No, I didn't know what one was either until my husband bought this one sometime back in the last century. It is finally done and even I have to admit that it's pretty darn sweet. 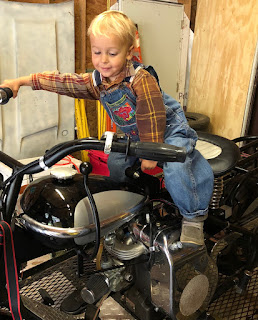 "I can drive it?" August asked his Boppy.
"No, not yet. Your feet can't grab the ground," his grandfather said.
And that was okay with August. He pretended and made the noises.

And that's the sort of day it was, not a lot of anything but a lot of everything and I believe the men got quite a bit done although it's not to the point in the project where you can actually see the progress.

Oh, how I love that boy!

And in not-so happy news, it would appear that Owen has the flu. He came home from baseball yesterday and went to bed and has been running a fever and mostly sleeping ever since. He's had a headache too. But he's okay. Lily reports that he's propped up right now, watching the Super Bowl with his daddy. I swear to you, I hate it when my grandchildren are sick as much as I hated it when my kids were sick.